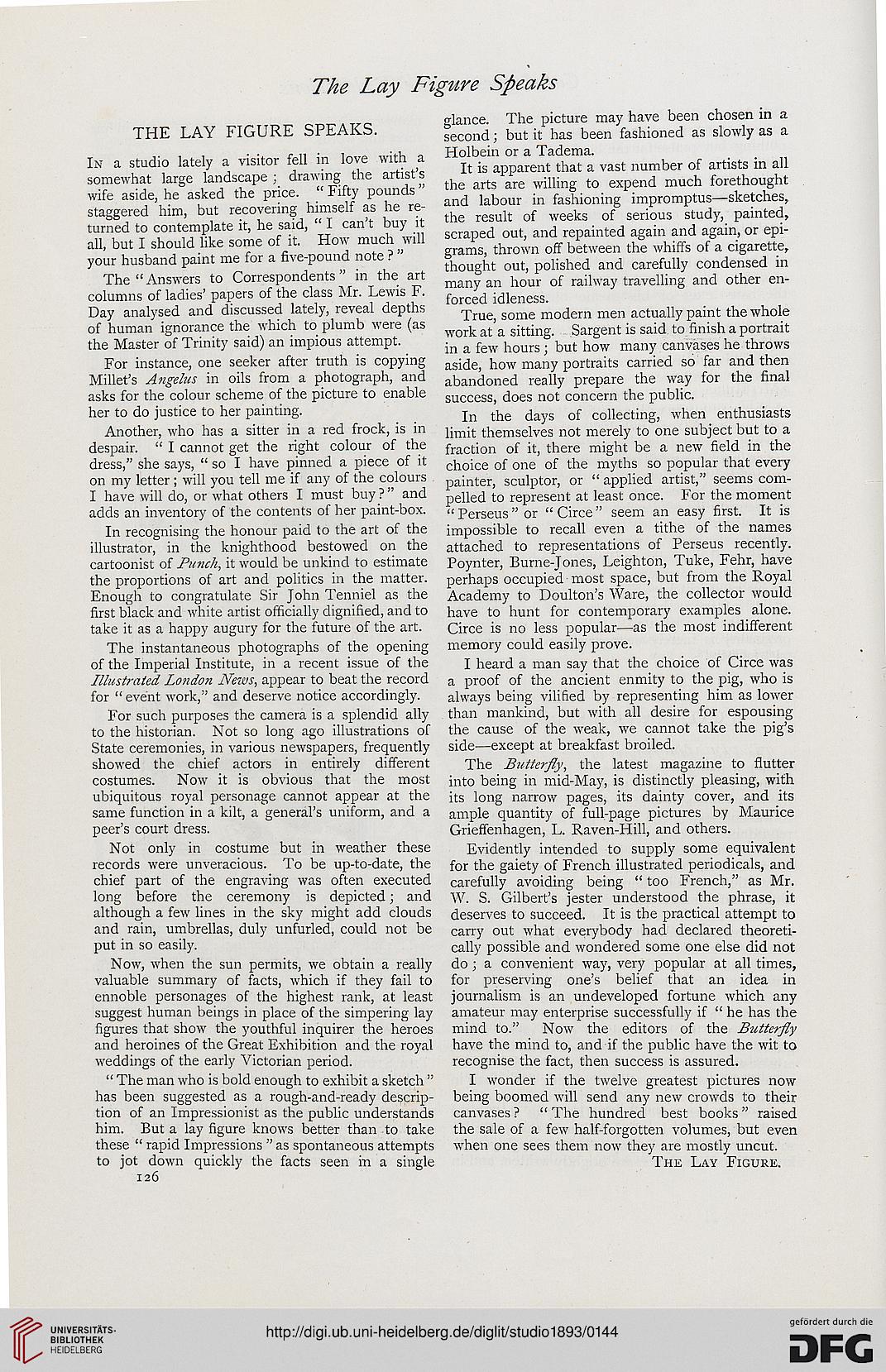 In a studio lately a visitor fell in love with a
somewhat large landscape ; drawing the artist's
wife aside, he asked the price. " Fifty pounds "
staggered him, but recovering himself as he re-
turned to contemplate it, he said, " I can't buy it
all, but I should like some of it. How much will
your husband paint me for a five-pound note ? "

The " Answers to Correspondents " in the art
columns of ladies' papers of the class Mr. Lewis F.
Day analysed and discussed lately, reveal depths
of human ignorance the which to plumb were (as
the Master of Trinity said) an impious attempt.

For instance, one seeker after truth is copying
Millet's Angelas in oils from a photograph, and
asks for the colour scheme of the picture to enable
her to do justice to her painting.

Another, who has a sitter in a red frock, is in
despair. " I cannot get the right colour of the
dress," she says, " so I have pinned a piece of it
on my letter; will you tell me if any of the colours
I have will do, or what others I must buy ? " and
adds an inventory of the contents of her paint-box.

In recognising the honour paid to the art of the
illustrator, in the knighthood bestowed on the
cartoonist of Pu?ich, it would be unkind to estimate
the proportions of art and politics in the matter.
Enough to congratulate Sir John Tenniel as the
first black and white artist officially dignified, and to
take it as a happy augury for the future of the art.

The instantaneous photographs of the opening
of the Imperial Institute, in a recent issue of the
Illustrated London JVeivs, appear to beat the record
for " event work," and deserve notice accordingly.

For such purposes the camera is a splendid ally
to the historian. Not so long ago illustrations of
State ceremonies, in various newspapers, frequently
showed the chief actors in entirely different
costumes. Now it is obvious that the most
ubiquitous royal personage cannot appear at the
same function in a kilt, a general's uniform, and a
peer's court dress.

Not only in costume but in weather these
records were unveracious. To be up-to-date, the
chief part of the engraving was often executed
long before the ceremony is depicted; and
although a few lines in the sky might add clouds
and rain, umbrellas, duly unfurled, could not be
put in so easily.

Now, when the sun permits, we obtain a really
valuable summary of facts, which if they fail to
ennoble personages of the highest rank, at least
suggest human beings in place of the simpering lay
figures that show the youthful inquirer the heroes
and heroines of the Great Exhibition and the royal
weddings of the early Victorian period.

" The man who is bold enough to exhibit a sketch "
has been suggested as a rough-and-ready descrip-
tion of an Impressionist as the public understands
him. But a lay figure knows better than to take
these " rapid Impressions " as spontaneous attempts
to jot down quickly the facts seen in a single

glance. The picture may have been chosen in a
second; but it has been fashioned as slowly as a
Holbein or a Tadema.

It is apparent that a vast number of artists in all
the arts are willing to expend much forethought
and labour in fashioning impromptus—sketches,
the result of weeks of serious study, painted,
scraped out, and repainted again and again, or epi-
grams, thrown off between the whiffs of a cigarette,
thought out, polished and carefully condensed in
many an hour of railway travelling and other en-
forced idleness.

True, some modern men actually paint the whole
work at a sitting. Sargent is said to finish a portrait
in a few hours; but how many canvases he throws
aside, how many portraits carried so far and then
abandoned really prepare the way for the final
success, does not concern the public.

In the days of collecting, when enthusiasts
limit themselves not merely to one subject but to a
fraction of it, there might be a new field in the
choice of one of the myths so popular that every
painter, sculptor, or " applied artist," seems com-
pelled to represent at least once. For the moment
" Perseus " or " Circe " seem an easy first. It is
impossible to recall even a tithe of the names
attached to representations of Perseus recently.
Poynter, Burne-Jones, Leighton, Tuke, Fehr, have
perhaps occupied most space, but from the Royal
Academy to Doulton's Ware, the collector would
have to hunt for contemporary examples alone.
Circe is no less popular—as the most indifferent
memory could easily prove.

I heard a man say that the choice of Circe was
a proof of the ancient enmity to the pig, who is
always being vilified by representing him as lower
than mankind, but with all desire for espousing
the cause of the weak, we cannot take the pig's
side—except at breakfast broiled.

The Butterfly, the latest magazine to flutter
into being in mid-May, is distinctly pleasing, with
its long narrow pages, its dainty cover, and its
ample quantity of full-page pictures by Maurice
Grieffenhagen, L. Raven-Hill, and others.

Evidently intended to supply some equivalent
for the gaiety of French illustrated periodicals, and
carefully avoiding being " too French," as Mr.
W. S. Gilbert's jester understood the phrase, it
deserves to succeed. It is the practical attempt to
carry out what everybody had declared theoreti-
cally possible and wondered some one else did not
do; a convenient way, very popular at all times,
for preserving one's belief that an idea in
journalism is an undeveloped fortune which any
amateur may enterprise successfully if " he has the
mind to." Now the editors of the Btdterfly
have the mind to, and if the public have the wit to
recognise the fact, then success is assured.

I wonder if the twelve greatest pictures now
being boomed will send any new crowds to their
canvases? "The hundred best books" raised
the sale of a few half-forgotten volumes, but even
when one sees them now they are mostly uncut.