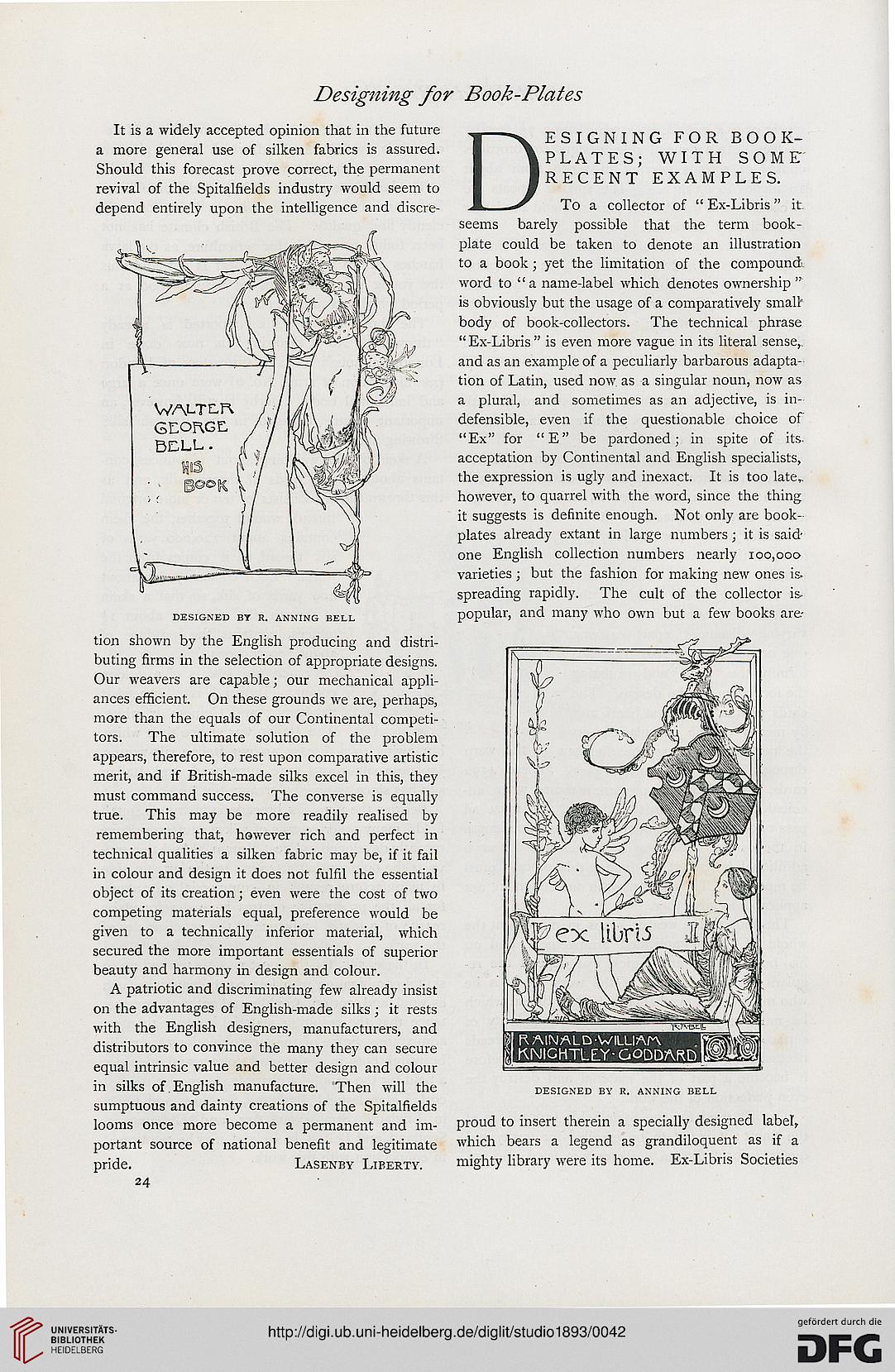 It is a widely accepted opinion that in the future
a more general use of silken fabrics is assured.
Should this forecast prove correct, the permanent
revival of the Spitalfields industry would seem to
depend entirely upon the intelligence and discre-

tion shown by the English producing and distri-
buting firms in the selection of appropriate designs.
Our weavers are capable; our mechanical appli-
ances efficient. On these grounds we are, perhaps,
more than the equals of our Continental competi-
tors. The ultimate solution of the problem
appears, therefore, to rest upon comparative artistic
merit, and if British-made silks excel in this, they
must command success. The converse is equally
true. This may be more readily realised by
remembering that, however rich and perfect in
technical qualities a silken fabric may be, if it fail
in colour and design it does not fulfil the essential
object of its creation; even were the cost of two
competing materials equal, preference would be
given to a technically inferior material, which
secured the more important essentials of superior
beauty and harmony in design and colour.

A patriotic and discriminating few already insist
on the advantages of English-made silks ; it rests
with the English designers, manufacturers, and
distributors to convince the many they can secure
equal intrinsic value and better design and colour
in silks of English manufacture. Then will the
sumptuous and dainty creations of the Spitalfields
looms once more become a permanent and im-
portant source of national benefit and legitimate
pride. Lasenby Liberty.

ESIGNING FOR BOOK-
PLATES; WITH SOME
RECENT EXAMPLES.

To a collector of "Ex-Libris" it

seems barely possible that the term book-
plate could be taken to denote an illustration
to a book; yet the limitation of the compound
word to "a name-label which denotes ownership "
is obviously but the usage of a comparatively small
body of book-collectors. The technical phrase
" Ex-Libris " is even more vague in its literal sense,
and as an example of a peculiarly barbarous adapta-
tion of Latin, used now as a singular noun, now as
a plural, and sometimes as an adjective, is in-
defensible, even if the questionable choice of
"Ex" for "E" be pardoned; in spite of its.
acceptation by Continental and English specialists,
the expression is ugly and inexact. It is too late,,
however, to quarrel with the word, since the thing
it suggests is definite enough. Not only are book-
plates already extant in large numbers; it is said-
one English collection numbers nearly 100,000
varieties ; but the fashion for making new ones is-
spreading rapidly. The cult of the collector is
popular, and many who own but a few books are-

proud to insert therein a specially designed label,
which bears a legend as grandiloquent as if a
mighty library were its home. Ex-Libris Societies