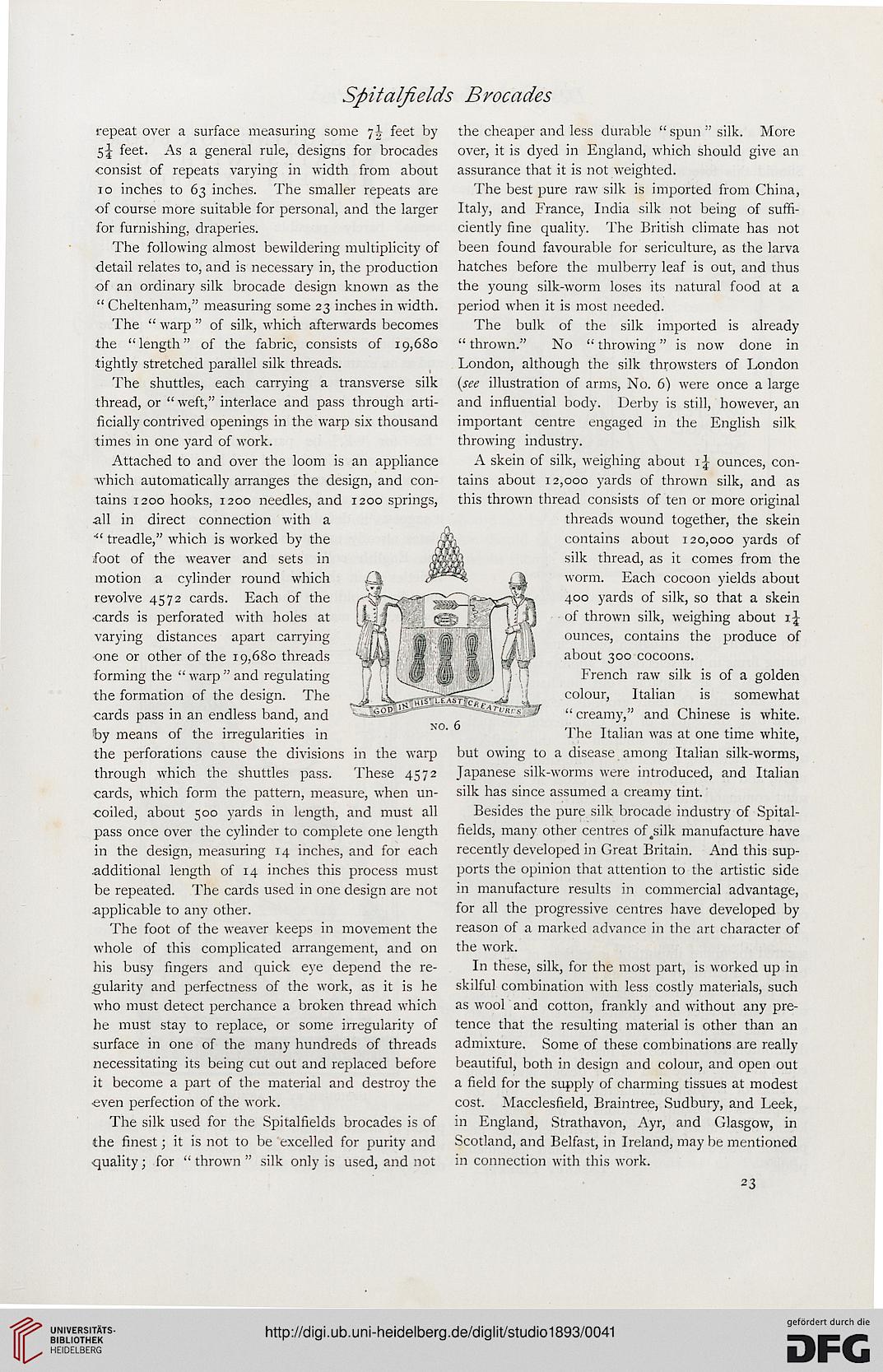 repeat over a surface measuring some 7J feet by the cheaper and less durable "spun "silk. More

feet. As a general rule, designs for brocades over, it is dyed in England, which should give an

consist of repeats varying in width from about assurance that it is not weighted.
10 inches to 63 inches. The smaller repeats are The best pure raw silk is imported from China,

of course more suitable for personal, and the larger Italy, and France, India silk not being of suffi-

for furnishing, draperies. ciently fine quality. The British climate has not

The following almost bewildering multiplicity of been found favourable for sericulture, as the larva

detail relates to, and is necessary in, the production hatches before the mulberry leaf is out, and thus

" Cheltenham," measuring some 23 inches in width, period when it is most needed.

The " warp" of silk, which afterwards becomes The bulk of the silk imported is already

The shuttles, each carrying a transverse silk (see illustration of arms, No. 6) were once a large

thread, or " weft," interlace and pass through arti- and influential body. Derby is still, however, an

times in one yard of work. throwing industry.

Attached to and over the loom is an appliance A skein of silk, weighing about 1 \ ounces, con-

■which automatically arranges the design, and con- tains about j 2,000 yards of thrown silk, and as

tains 1200 hooks, 1200 needles, and 1200 springs, this thrown thread consists of ten or more original
.all in direct connection with a threads wound together, the skein

the formation of the design. The Jj> lrZ^\ 4 colour, Italian is somewhat

cards pass in an endless band, and ^J^^^^ /^^i^Sf " creamy," and Chinese is white,
by means of the irregularities in The Italian was at one time white,

the perforations cause the divisions in the warp but owing to a disease among Italian silk-worms,
through which the shuttles pass. These 4572 Japanese silk-worms were introduced, and Italian
cards, which form the pattern, measure, when un- silk has since assumed a creamy tint,
coiled, about 500 yards in length, and must all Besides the pure silk brocade industry of Spital-
pass once over the cylinder to complete one length fields, many other centres of .silk manufacture have
in the design, measuring 14 inches, and for each recently developed in Great Britain. And this sup-
additional length of 14 inches this process must ports the opinion that attention to the artistic side
be repeated. The cards used in one design are not in manufacture results in commercial advantage,
applicable to any other. for all the progressive centres have developed by

The foot of the weaver keeps in movement the reason of a marked advance in the art character of
whole of this complicated arrangement, and on the work.

his busy fingers and quick eye depend the re- In these, silk, for the most part, is worked up in
gularity and perfectness of the work, as it is he skilful combination with less costly materials, such
who must detect perchance a broken thread which as wool and cotton, frankly and without any pre-
he must stay to replace, or some irregularity of tence that the resulting material is other than an
surface in one of the many hundreds of threads admixture. Some of these combinations are really
necessitating its being cut out and replaced before beautiful, both in design and colour, and open out
it become a part of the material and destroy the a field for the supply of charming tissues at modest
even perfection of the work. cost. Macclesfield, Braintree, Sudbury, and Leek,

The silk used for the Spitalfields brocades is of in England, Strathavon, Ayr, and Glasgow, in
the finest; it is not to be excelled for purity and Scotland, and Belfast, in Ireland, may be mentioned
quality; for " thrown " silk only is used, and not m connection with this work.