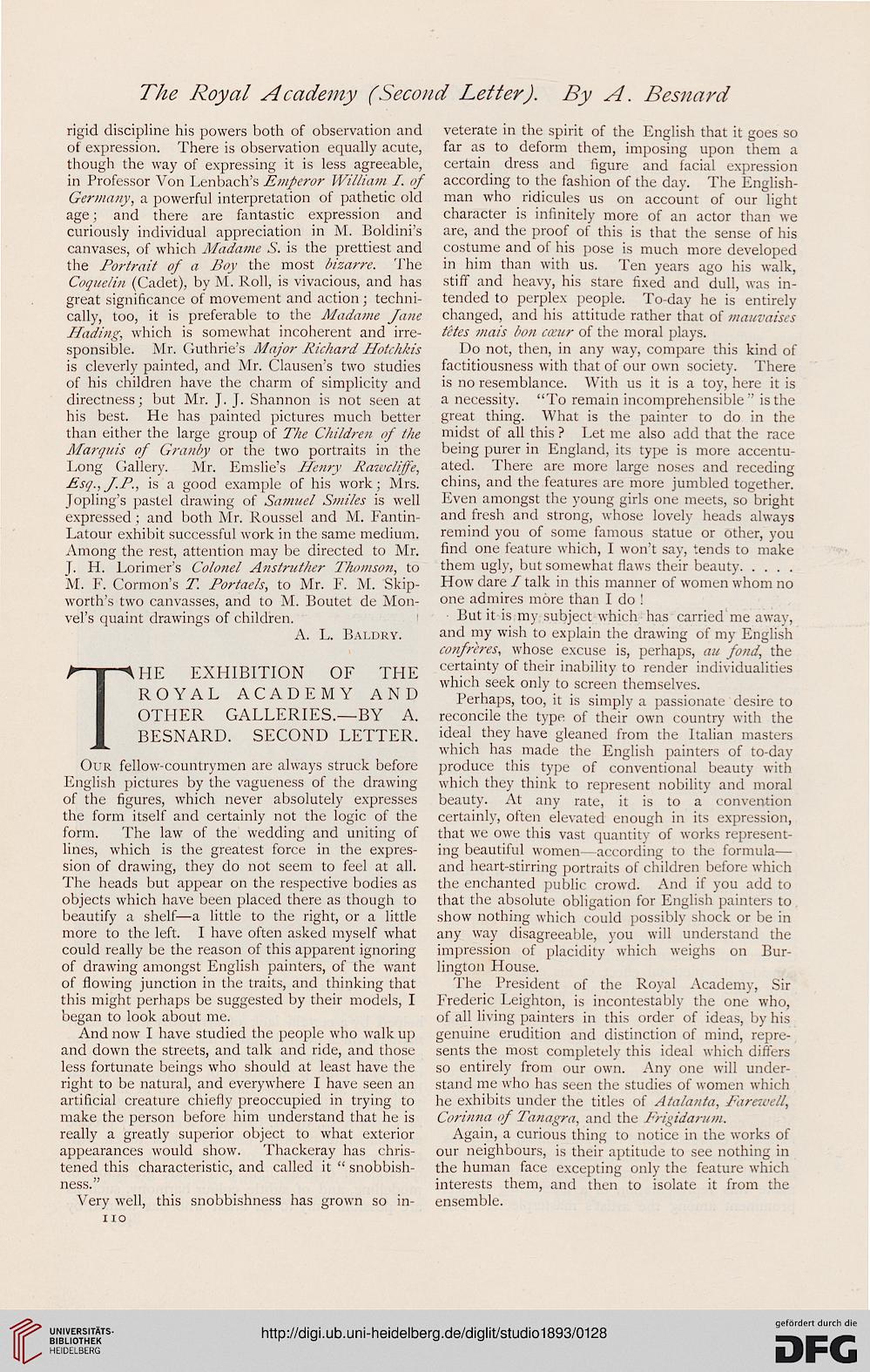 rigid discipline his powers both of observation and
of expression. There is observation equally acute,
though the way of expressing it is less agreeable,
in Professor Von Lenbach's Emperor William I. of
Germany, a powerful interpretation of pathetic old
age; and there are fantastic expression and
curiously individual appreciation in M. Boldini's
canvases, of which Madame S. is the prettiest and
the Portrait of a Boy the most bizarre. The
Coquelin (Cadet), by M. Roll, is vivacious, and has
great significance of movement and action ; techni-
cally, too, it is preferable to the Madame fane
Hading, which is somewhat incoherent and irre-
sponsible. Mr. Guthrie's Major Richard Hotchkis
is cleverly painted, and Mr. Clausen's two studies
of his children have the charm of simplicity and
directness; but Mr. J. J. Shannon is not seen at
his best. He has painted pictures much better
than either the large group of The Children of the
Marquis of Granby or the two portraits in the
Long Gallery. Mr. Emslie's Henry Rawcliffe,
Esq.,f.P., is a good example of his work; Mrs.
Jopling's pastel drawing of Samuel Smiles is well
expressed ; and both Mr. Roussel and M. Fantin-
Latour exhibit successful work in the same medium.
Among the rest, attention may be directed to Mr.
|. H. Lorimer's Colonel Anstruther Thomson, to
M. F. Cormon's T. Portaels, to Mr. F. M. Skip-
worth's two canvasses, and to M. Boutet de Mon-
vel's quaint drawings of children.

THE EXHIBITION OF THE
ROYAL ACADEMY AND
OTHER GALLERIES.—BY A.
BESNARD. SECOND LETTER.

Our fellow-countrymen are always struck before
English pictures by the vagueness of the drawing
of the figures, which never absolutely expresses
the form itself and certainly not the logic of the
form. The law of the wedding and uniting of
lines, which is the greatest force in the expres-
sion of drawing, they do not seem to feel at all.
The heads but appear on the respective bodies as
objects which have been placed there as though to
beautify a shelf—a little to the right, or a little
more to the left. I have often asked myself what
could really be the reason of this apparent ignoring
of drawing amongst English painters, of the want
of flowing junction in the traits, and thinking that
this might perhaps be suggested by their models, I
began to look about me.

And now I have studied the people who walk up
and down the streets, and talk and ride, and those
less fortunate beings who should at least have the
right to be natural, and everywhere I have seen an
artificial creature chiefly preoccupied in trying to
make the person before him understand that he is
really a greatly superior object to what exterior
appearances would show. Thackeray has chris-
tened this characteristic, and called it " snobbish-
ness."

Very well, this snobbishness has grown so in-

veterate in the spirit of the English that it goes so
far as to deform them, imposing upon them a
certain dress and figure and facial expression
according to the fashion of the day. The English-
man who ridicules us on account of our light
character is infinitely more of an actor than we
are, and the proof of this is that the sense of his
costume and of his pose is much more developed
in him than with us. Ten years ago his walk,
stiff and heavy, his stare fixed and dull, was in-
tended to perplex people. To-day he is entirely
changed, and his attitude rather that of mauvaiscs
tetes mais bon coeur of the moral plays.

Do not, then, in any way, compare this kind of
factitiousness with that of our own society. There
is no resemblance. With us it is a toy, here it is
a necessity. "To remain incomprehensible '' is the
great thing. What is the painter to do in the
midst of all this ? Let me also add that the race
being purer in England, its type is more accentu-
ated. There are more large noses and receding
chins, and the features are more jumbled together.
Even amongst the young girls one meets, so bright
and fresh and strong, whose lovely heads always
remind you of some famous statue or other, you
find one feature which, I won't say, tends to make

them ugly, but somewhat flaws their beauty.....

How dare / talk in this manner of women whom no
one admires more than I do !

But it is my subject which has carried me away,
and my wish to explain the drawing of my English
confreres, whose excuse is, perhaps, au fond, the
certainty of their inability to render individualities
which seek only to screen themselves.

Perhaps, too, it is simply a passionate desire to
reconcile the type of their own country with the
ideal they have gleaned from the Italian masters
which has made the English painters of to-day
produce this type of conventional beauty with
which they think to represent nobility and moral
beauty. At any rate, it is to a convention
certainly, often elevated enough in its expression,
that we owe this vast quantity of works represent-
ing beautiful women—according to the formula—
and heart-stirring portraits of children before which
the enchanted public crowd. And if you add to
that the absolute obligation for English painters to .
show nothing which could possibly shock or be in
any way disagreeable, you will understand the
impression of placidity which weighs on Bur-
lington House.

The President of the Royal Academy, Sir
Frederic Leighton, is incontestably the one who,
of all living painters in this order of ideas, by his
genuine erudition and distinction of mind, repre-
sents the most completely this ideal which differs
so entirely from our own. Any one will under-
stand me who has seen the studies of women which
he exhibits under the titles of Atalanta, Farewell,
Corinna of Tanagra, and the Frigidarum.

Again, a curious thing to notice in the works of
our neighbours, is their aptitude to see nothing in
the human face excepting only the feature which
interests them, and then to isolate it from the
ensemble.