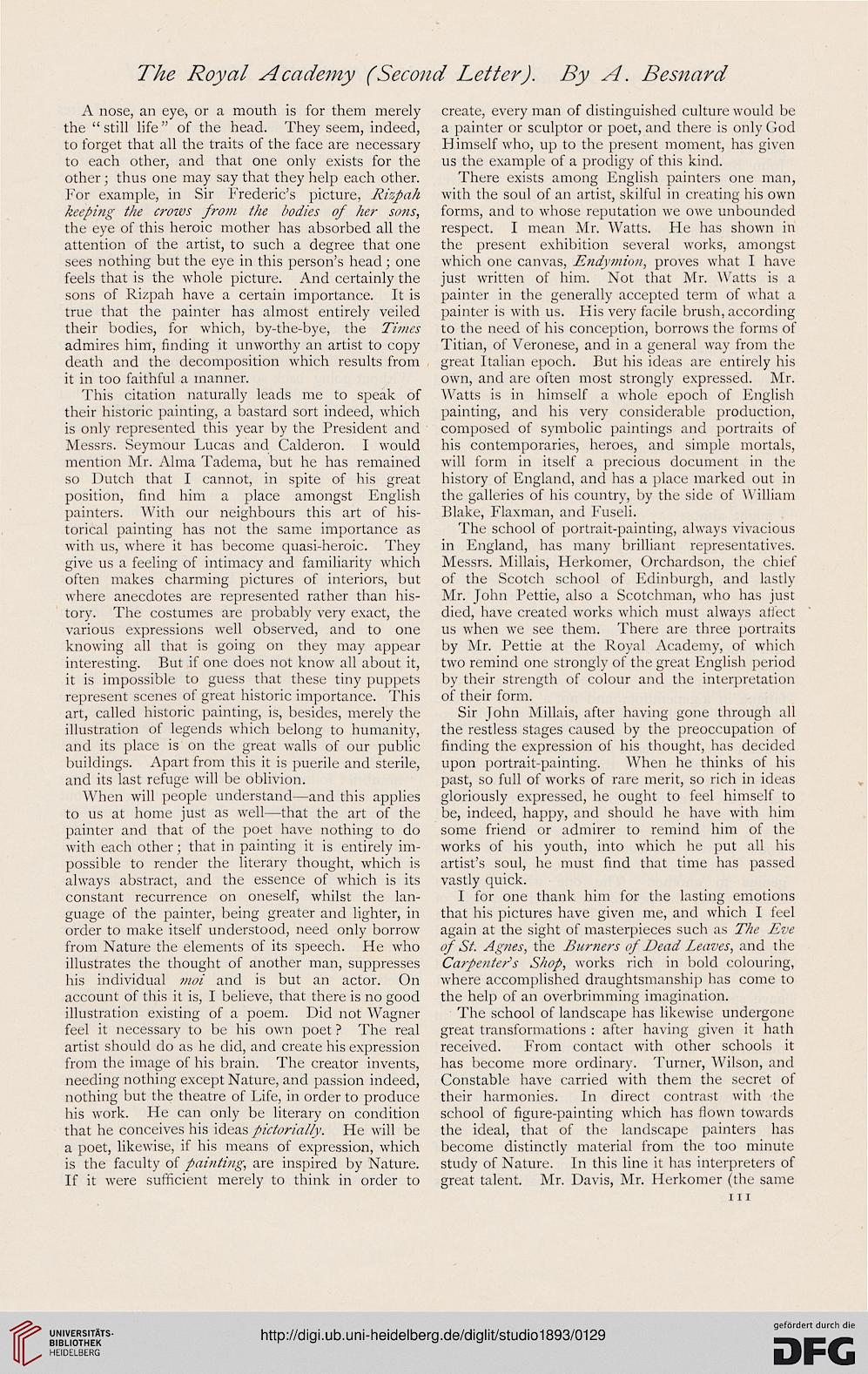 A nose, an eye, or a mouth is for them merely
the " still life " of the head. They seem, indeed,
to forget that all the traits of the face are necessary
to each other, and that one only exists for the
other; thus one may say that they help each other.
For example, in Sir Frederic's picture, Rizpah
keeping the crows from the bodies of her sons,
the eye of this heroic mother has absorbed all the
attention of the artist, to such a degree that one
sees nothing but the eye in this person's head; one
feels that is the whole picture. And certainly the
sons of Rizpah have a certain importance. It is
true that the painter has almost entirely veiled
their bodies, for which, by-the-bye, the Times
admires him, finding it unworthy an artist to copy
death and the decomposition which results from
it in too faithful a manner.

This citation naturally leads me to speak of
their historic painting, a bastard sort indeed, which
is only represented this year by the President and
Messrs. Seymour Lucas and Calderon. I would
mention Mr. Alma Tadema, but he has remained
so Dutch that I cannot, in spite of his great
position, find him a place amongst English
painters. With our neighbours this art of his-
torical painting has not the same importance as
with us, where it has become quasi-heroic. They
give us a feeling of intimacy and familiarity which
often makes charming pictures of interiors, but
where anecdotes are represented rather than his-
tory. The costumes are probably very exact, the
various expressions well observed, and to one
knowing all that is going on they may appear
interesting. But if one does not know all about it,
it is impossible to guess that these tiny puppets
represent scenes of great historic importance. This
art, called historic painting, is, besides, merely the
illustration of legends which belong to humanity,
and its place is on the great walls of our public
buildings. Apart from this it is puerile and sterile,
and its last refuge will be oblivion.

When will people understand—and this applies
to us at home just as well—that the art of the
painter and that of the poet have nothing to do
with each other; that in painting it is entirely im-
possible to render the literary thought, which is
always abstract, and the essence of which is its
constant recurrence on oneself, whilst the lan-
guage of the painter, being greater and lighter, in
order to make itself understood, need only borrow
from Nature the elements of its speech. He who
illustrates the thought of another man, suppresses
his individual mot and is but an actor. On
account of this it is, I believe, that there is no good
illustration existing of a poem. Did not Wagner
feel it necessary to be his own poet ? The real
artist should do as he did, and create his expression
from the image of his brain. The creator invents,
needing nothing except Nature, and passion indeed,
nothing but the theatre of Life, in order to produce
his work. He can only be literary on condition
that he conceives his ideas pictorial/}'. He will be
a poet, likewise, if his means of expression, which
is the faculty of painting, are inspired by Nature.
If it were sufficient merely to think in order to

create, every man of distinguished culture would be
a painter or sculptor or poet, and there is only God
Himself who, up to the present moment, has given
us the example of a prodigy of this kind.

There exists among English painters one man,
with the soul of an artist, skilful in creating his own
forms, and to whose reputation we owe unbounded
respect. I mean Mr. Watts. He has shown in
the present exhibition several works, amongst
which one canvas, Endymion, proves what I have
just written of him. Not that Mr. Watts is a
painter in the generally accepted term of what a
painter is with us. His very facile brush, according
to the need of his conception, borrows the forms of
Titian, of Veronese, and in a general way from the
great Italian epoch. But his ideas are entirely his
own, and are often most strongly expressed. Mr.
Watts is in himself a whole epoch of English
painting, and his very considerable production,
composed of symbolic paintings and portraits of
his contemporaries, heroes, and simple mortals,
will form in itself a precious document in the
history of England, and has a place marked out in
the galleries of his country, by the side of William
Blake, Flaxman, and Fuseli.

The school of portrait-painting, always vivacious
in England, has many brilliant representatives.
Messrs. Millais, Herkomer, Orchardson, the chief
of the Scotch school of Edinburgh, and lastly
Mr. John Pettie, also a Scotchman, who has just
died, have created works which must always affect
us when we see them. There are three portraits
by Mr. Pettie at the Royal Academy, of which
two remind one strongly of the great English period
by their strength of colour and the interpretation
of their form.

Sir John Millais, after having gone through all
the restless stages caused by the preoccupation of
finding the expression of his thought, has decided
upon portrait-painting. When he thinks of his
past, so full of works of rare merit, so rich in ideas
gloriously expressed, he ought to feel himself to
be, indeed, happy, and should he have with him
some friend or admirer to remind him of the
works of his youth, into which he put all his
artist's soul, he must find that time has passed
vastly quick.

I for one thank him for the lasting emotions
that his pictures have given me, and which I feel
again at the sight of masterpieces such as The Eve
of St. Agnes, the Burners of Dead Leaves, and the
Carpenter's Shop, works rich in bold colouring,
where accomplished draughtsmanship has come to
the help of an overbrimming imagination.

The school of landscape has likewise undergone
great transformations : after having given it hath
received. From contact with other schools it
has become more ordinary. Turner, Wilson, and
Constable have carried with them the secret of
their harmonies. In direct contrast with the
school of figure-painting which has flown towards
the ideal, that of the landscape painters has
become distinctly material from the too minute
study of Nature. In this line it has interpreters of
great talent. Mr. Davis, Mr. Herkomer (the same