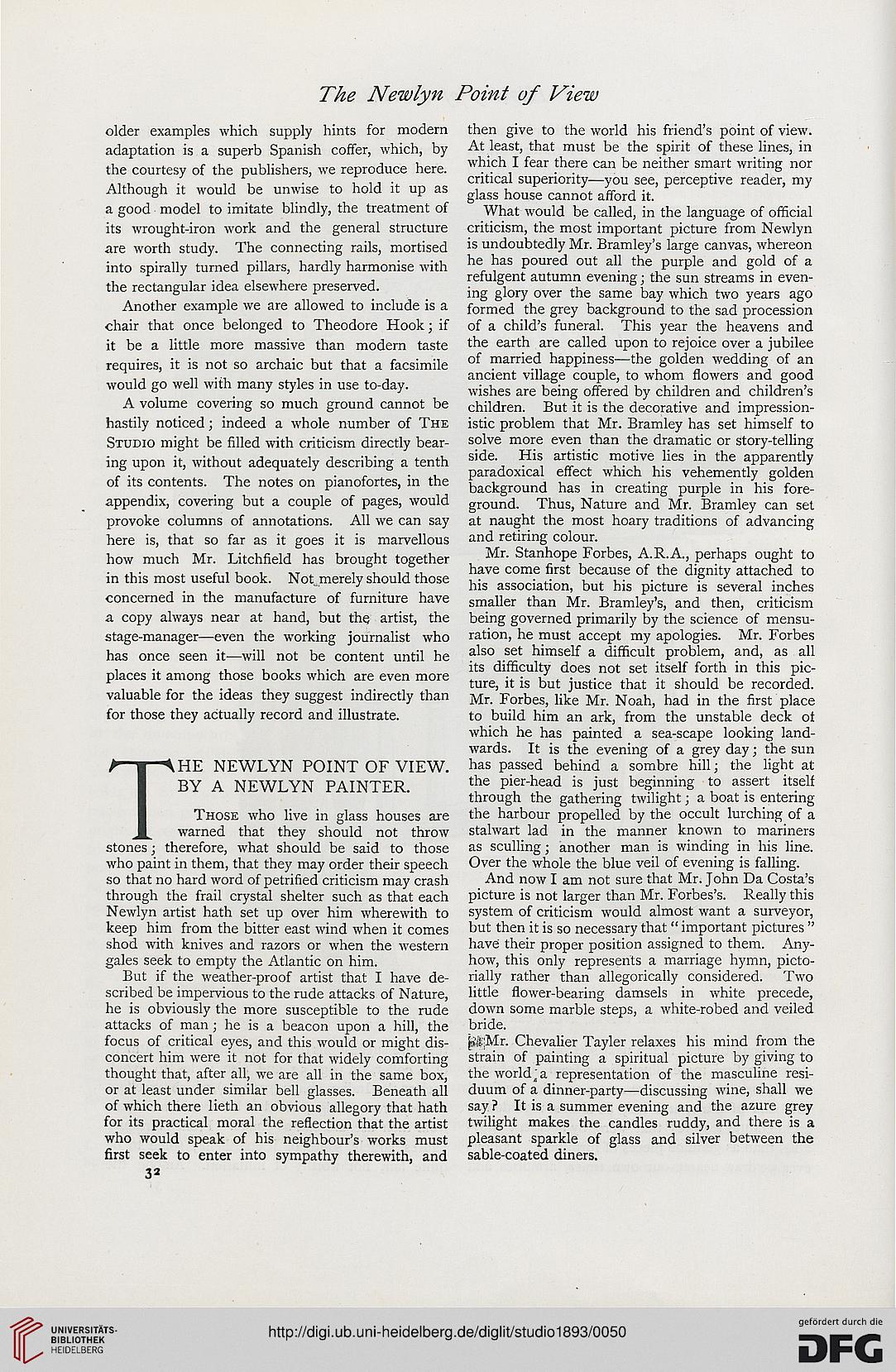 older examples which supply hints for modern
adaptation is a superb Spanish coffer, which, by
the courtesy of the publishers, we reproduce here.
Although it would be unwise to hold it up as
a good model to imitate blindly, the treatment of
its wrought-iron work and the general structure
are worth study. The connecting rails, mortised
into spirally turned pillars, hardly harmonise with
the rectangular idea elsewhere preserved.

Another example we are allowed to include is a
chair that once belonged to Theodore Hook; if
it be a little more massive than modern taste
requires, it is not so archaic but that a facsimile
would go well with many styles in use to-day.

A volume covering so much ground cannot be
hastily noticed; indeed a whole number of The
Studio might be filled with criticism directly bear-
ing upon it, without adequately describing a tenth
of its contents. The notes on pianofortes, in the
appendix, covering but a couple of pages, would
provoke columns of annotations. All we can say
here is, that so far as it goes it is marvellous
how much Mr. Litchfield has brought together
in this most useful book. Not merely should those
concerned in the manufacture of furniture have
a copy always near at hand, but the artist, the
stage-manager—even the working journalist who
has once seen it—will not be content until he
places it among those books which are even more
valuable for the ideas they suggest indirectly than
for those they actually record and illustrate.

HE NEWLYN POINT OF VIEW.
BY A NEWLYN PAINTER.

stones; therefore, what should be said to those
who paint in them, that they may order their speech
so that no hard word of petrified criticism may crash
through the frail crystal shelter such as that each
Newlyn artist hath set up over him wherewith to
keep him from the bitter east wind when it comes
shod with knives and razors or when the western
gales seek to empty the Atlantic on him.

But if the weather-proof artist that I have de-
scribed be impervious to the rude attacks of Nature,
he is obviously the more susceptible to the rude
attacks of man; he is a beacon upon a hill, the
focus of critical eyes, and this would or might dis-
concert him were it not for that widely comforting
thought that, after all, we are all in the same box,
or at least under similar bell glasses. Beneath all
of which there lieth an obvious allegory that hath
for its practical moral the reflection that the artist
who would speak of his neighbour's works must
first seek to enter into sympathy therewith, and
32

then give to the world his friend's point of view.
At least, that must be the spirit of these lines, in
which I fear there can be neither smart writing nor
critical superiority—you see, perceptive reader, my
glass house cannot afford it.

What would be called, in the language of official
criticism, the most important picture from Newlyn
is undoubtedly Mr. Bramley's large canvas, whereon
he has poured out all the purple and gold of a
refulgent autumn evening; the sun streams in even-
ing glory over the same bay which two years ago
formed the grey background to the sad procession
of a child's funeral. This year the heavens and
the earth are called upon to rejoice over a jubilee
of married happiness—the golden wedding of an
ancient village couple, to whom flowers and good
wishes are being offered by children and children's
children. But it is the decorative and impression-
istic problem that Mr. Bramley has set himself to
solve more even than the dramatic or story-telling
side. His artistic motive lies in the apparently
paradoxical effect which his vehemently golden
background has in creating purple in his fore-
ground. Thus, Nature and Mr. Bramley can set
at naught the most hoary traditions of advancing
and retiring colour.

Mr. Stanhope Forbes, A.R.A., perhaps ought to
have come first because of the dignity attached to
his association, but his picture is several inches
smaller than Mr. Bramley's, and then, criticism
being governed primarily by the science of mensu-
ration, he must accept my apologies. Mr. Forbes
also set himself a difficult problem, and, as all
its difficulty does not set itself forth in this pic-
ture, it is but justice that it should be recorded.
Mr. Forbes, like Mr. Noah, had in the first place
to build him an ark, from the unstable deck ot
which he has painted a sea-scape looking land-
wards. It is the evening of a grey day; the sun
has passed behind a sombre hill; the light at
the pier-head is just beginning to assert itself
through the gathering twilight; a boat is entering
the harbour propelled by the occult lurching of a
stalwart lad in the manner known to mariners
as sculling; another man is winding in his line.
Over the whole the blue veil of evening is falling.

And now I am not sure that Mr. John Da Costa's
picture is not larger than Mr. Forbes's. Really this
system of criticism would almost want a surveyor,
but then it is so necessary that " important pictures "
have their proper position assigned to them. Any-
how, this only represents a marriage hymn, picto-
rially rather than allegorically considered. Two
little flower-bearing damsels in white precede,
down some marble steps, a white-robed and veiled
bride.

^'A;Mr. Chevalier Tayler relaxes his mind from the
strain of painting a spiritual picture by giving to
the world, a representation of the masculine resi-
duum of a dinner-party—discussing wine, shall we
say ? It is a summer evening and the azure grey
twilight makes the candles ruddy, and there is a
pleasant sparkle of glass and silver between the
sable-coated diners.