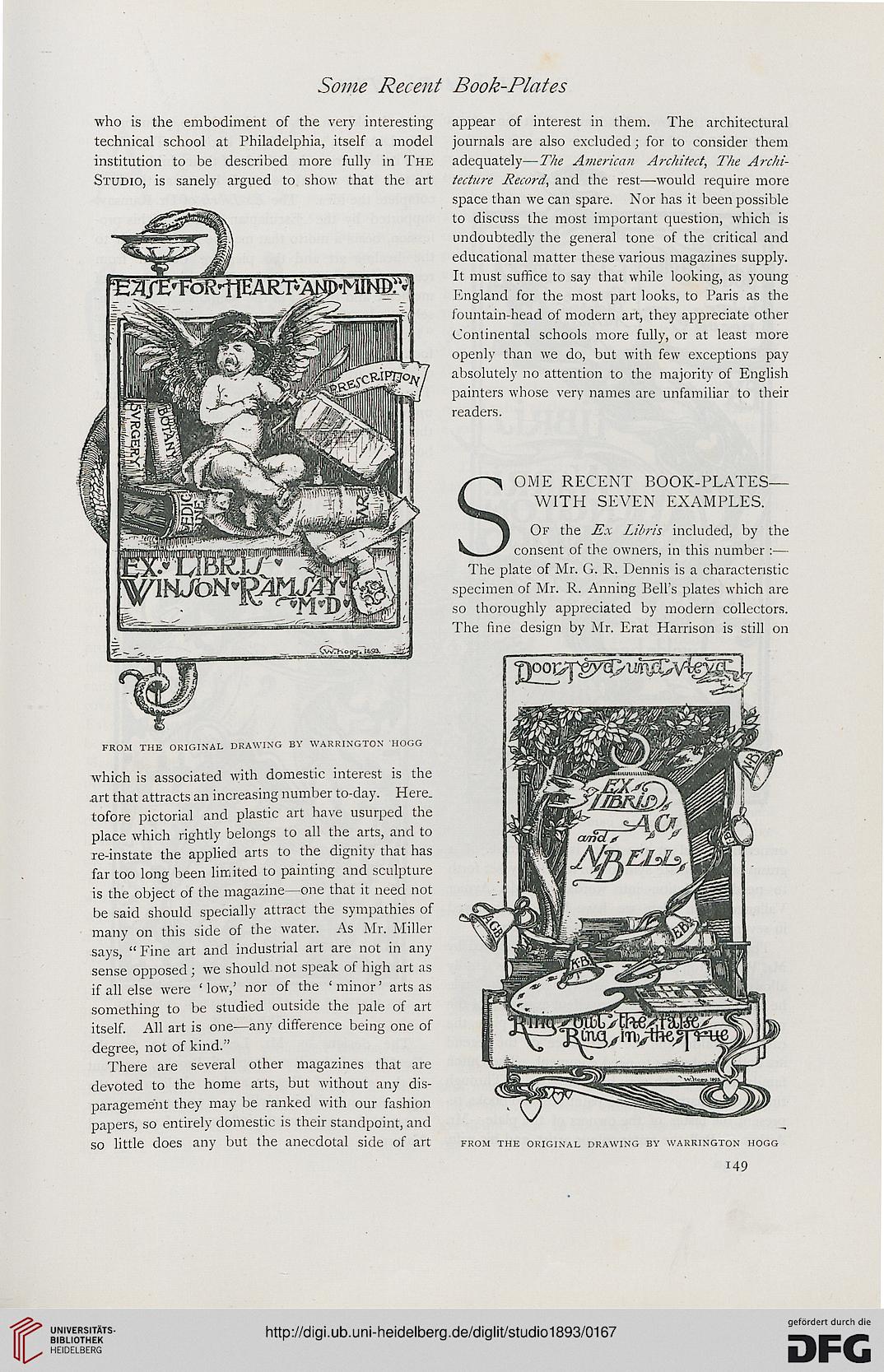 who is the embodiment of the very interesting
technical school at Philadelphia, itself a model
institution to be described more fully in The
Studio, is sanely argued to show that the art

FROM THE ORIGINAL DRAWING BY WARRINGTON HOGG

which is associated with domestic interest is the
art that attracts an increasing number to-day. Here,
tofore pictorial and plastic art have usurped the
place which rightly belongs to all the arts, and to
re-instate the applied arts to the dignity that has
far too long been limited to painting and sculpture
is the object of the magazine—one that it need not
be said should specially attract the sympathies of
many on this side of the water. As Mr. Miller
says, "Fine art and industrial art are not in any
sense opposed; we should not speak of high art as
if all else were 'low,' nor of the 'minor' arts as
something to be studied outside the pale of art
itself. All art is one—any difference being one of
degree, not of kind."

There are several other magazines that are
devoted to the home arts, but without any dis-
paragement they may be ranked with our fashion
papers, so entirely domestic is their standpoint, and
so little does any but the anecdotal side of art

appear of interest in them. The architectural
journals are also excluded; for to consider them
adequately—The American Architect, The Archi-
tecture Record, and the rest—would require more
space than we can spare. Nor has it been possible
to discuss the most important question, which is
undoubtedly the general tone of the critical and
educational matter these various magazines supply.
It must suffice to say that while looking, as young
Kngland for the most part looks, to Paris as the
fountain-head of modern art, they appreciate other
Continental schools more fully, or at least more
openly than we do, but with few exceptions pay
absolutely no attention to the majority of English
painters whose very names are unfamiliar to their
readers.

Of the Ex Libris included, by the
consent of the owners, in this number :—

The plate of Mr. G. R. Dennis is a characteristic
specimen of Mr. R. Aiming Pell's plates which are
so thoroughly appreciated by modern collectors.
The fine design by Mr. Erat Harrison is still on

FROM THE ORIGINAL DRAWING BY WARRINGTON HOGG