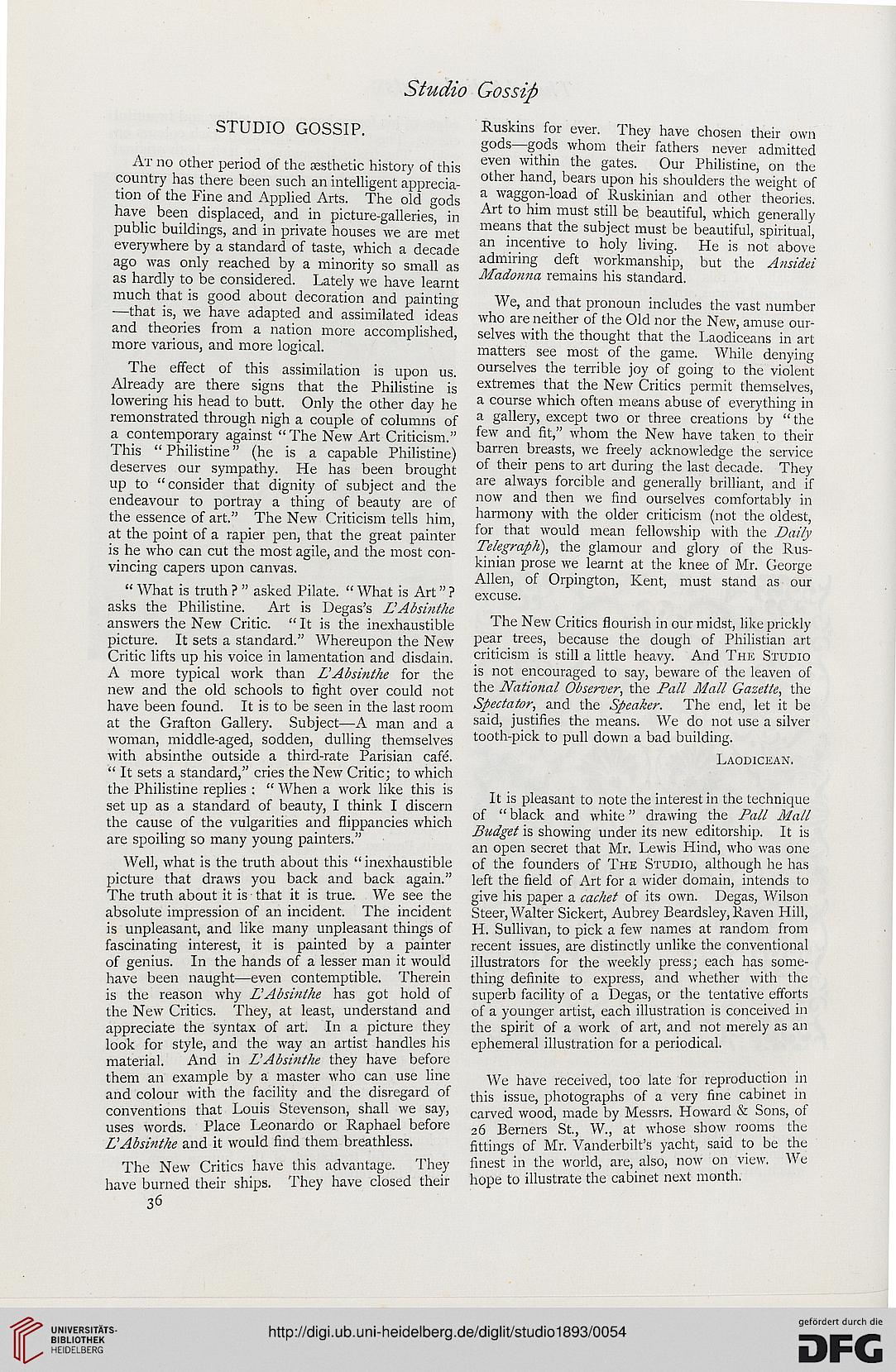 At no other period of the aesthetic history of this
country has there been such an intelligent apprecia-
tion of the Fine and Applied Arts. The old gods
have been displaced, and in picture-galleries, in
public buildings, and in private houses we are met
everywhere by a standard of taste, which a decade
ago was only reached by a minority so small as
as hardly to be considered. Lately we have learnt
much that is good about decoration and painting
—that is, we have adapted and assimilated ideas
and theories from a nation more accomplished,
more various, and more logical.

The effect of this assimilation is upon us.
Already are there signs that the Philistine is
lowering his head to butt. Only the other day he
remonstrated through nigh a couple of columns of
a contemporary against " The New Art Criticism."
This " Philistine" (he is a capable Philistine)
deserves our sympathy. He has been brought
up to "consider that dignity of subject and the
endeavour to portray a thing of beauty are of
the essence of art." The New Criticism tells him,
at the point of a rapier pen, that the great painter
is he who can cut the most agile, and the most con-
vincing capers upon canvas.

" What is truth ? " asked Pilate. " What is Art" ?
asks the Philistine. Art is Uegas's L'Absinthe
answers the New Critic. " It is the inexhaustible
picture. It sets a standard." Whereupon the New
Critic lifts up his voice in lamentation and disdain.
A more typical work than L Absinthe for the
new and the old schools to right over could not
have been found. It is to be seen in the last room
at the Grafton Gallery. Subject—A man and a
woman, middle-aged, sodden, dulling themselves
with absinthe outside a third-rate Parisian cafe.
" It sets a standard," cries the New Critic; to which
the Philistine replies : " When a work like this is
set up as a standard of beauty, I think I discern
the cause of the vulgarities and flippancies which
are spoiling so many young painters."

Well, what is the truth about this " inexhaustible
picture that draws you back and back again."
The truth about it is that it is true. We see the
absolute impression of an incident. The incident
is unpleasant, and like many unpleasant things of
fascinating interest, it is painted by a painter
of genius. In the hands of a lesser man it would
have been naught—even contemptible. Therein
is the reason why L'Absinthe has got hold of
the New Critics. They, at least, understand and
appreciate the syntax of art. In a picture they
look for style, and the way an artist handles his
material. And in L'Absinthe they have before
them an example by a master who can use line
and colour with the facility and the disregard of
conventions that Louis Stevenson, shall we say,
uses words. Place Leonardo or Raphael before
LAbsinthe and it would find them breathless.

The New Critics have this advantage. They
have burned their ships. They have closed their
36

Ruskms for ever. They have chosen their own
gods—gods whom their fathers never admitted
even within the gates. Our Philistine, on the
other hand, bears upon his shoulders the weight of
a waggon-load of Ruskinian and other theories.
Art to him must still be beautiful, which generally
means that the subject must be beautiful, spiritual,
an incentive to holy living. He is not above
admiring deft workmanship, but the Ansidei
Madonna remains his standard.

We, and that pronoun includes the vast number
who are neither of the Old nor the New, amuse our-
selves with the thought that the Laodiceans in art
matters see most of the game. While denying
ourselves the terrible joy of going to the violent
extremes that the New Critics permit themselves,
a course which often means abuse of everything in
a gallery, except two or three creations by "the
few and fit," whom the New have taken to their
barren breasts, we freely acknowledge the service
of their pens to art during the last decade. They
are always forcible and generally brilliant, and if
now and then we find ourselves comfortably in
harmony with the older criticism (not the oldest,
for that would mean fellowship with the Daily
Telegraph), the glamour and glory of the Rus-
kinian prose we learnt at the knee of Mr. George
Allen, of Orpington, Kent, must stand as our
excuse.

The New Critics flourish in our midst, like prickly
pear trees, because the dough of Philistian art
criticism is still a little heavy. And The Studio
is not encouraged to say, beware of the leaven of
the National Observer, the Pall Mall Gazette, the
Spectator, and the Speaker. The end, let it be
said, justifies the means. We do not use a silver
tooth-pick to pull down a bad building.

It is pleasant to note the interest in the technique
of "black and white" drawing the Pall Mall
Budget is showing under its new editorship. It is
an open secret that Mr. Lewis Hind, who was one
of the founders of The Studio, although he has
left the field of Art for a wider domain, intends to
give his paper a cachet of its own. Degas, Wilson
Steer, Walter Sickert, Aubrey Beardsley, Raven Hill,
H. Sullivan, to pick a few names at random from
recent issues, are distinctly unlike the conventional
illustrators for the weekly press; each has some-
thing definite to express, and whether with the
superb facility of a Degas, or the tentative efforts
of a younger artist, each illustration is conceived in
the spirit of a work of art, and not merely as an
ephemeral illustration for a periodical.

We have received, too late for reproduction in
this issue, photographs of a very fine cabinet in
carved wood, made by Messrs. Howard & Sons, of
26 Bemers St., W., at whose show rooms the
fittings of Mr. Vanderbilt's yacht, said to be the
finest in the world, are, also, now on view. We
hope to illustrate the cabinet next month.