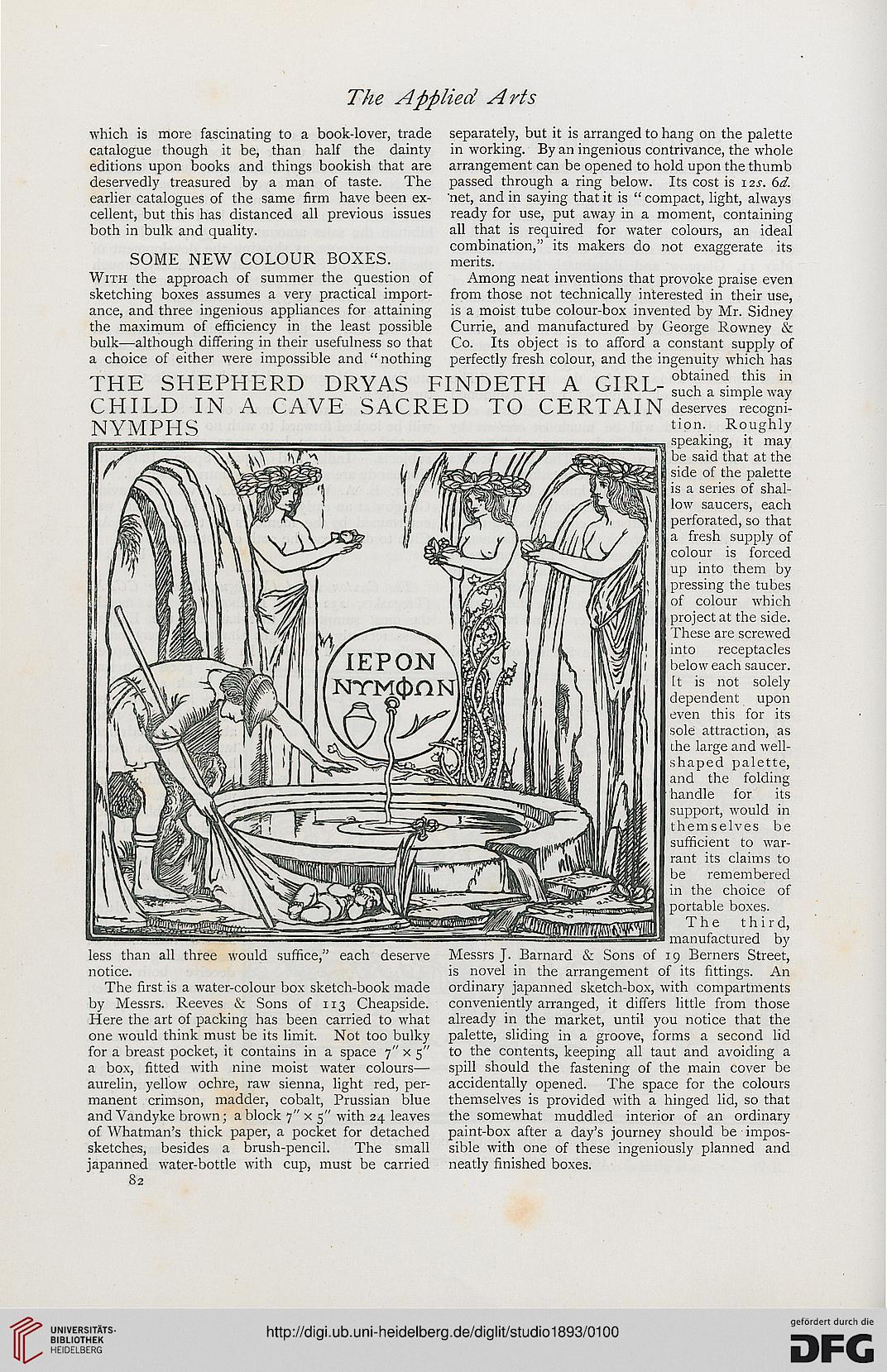 ■which is more fascinating to a book-lover, trade separately, but it is arranged to hang on the palette

catalogue though it be, than half the dainty in working. By an ingenious contrivance, the whole

deservedly treasured by a man of taste. The passed through a ring below. Its cost is xzs. 6d.

earlier catalogues of the same firm have been ex- 'net, and in saying that it is " compact, light, always

cellent, but this has distanced all previous issues ready for use, put away in a moment, containing

both in bulk and quality. all that is required for water colours, an ideal

combination," its makers do not exaggerate its

sketching boxes assumes a very practical import- from those not technically interested in their use,

ance, and three ingenious appliances for attaining is a moist tube colour-box invented by Mr. Sidney

the maximum of efficiency in the least possible Currie, and manufactured by George Rowney &

bulk—although differing in their usefulness so that Co. Its object is to afford a constant supply of

a choice of either were impossible and " nothing perfectly fresh colour, and the ingenuity which has

CHILD IN A CAVE SACRED TO CERTAIN deserves recogni-

speaking, it may
be said that at the
side of the palette
is a series of shal-
low saucers, each
perforated, so that
a fresh supply of
colour is forced
up into them by
pressing the tubes
of colour which
project at the side.
These are screwed
into receptacles
below each saucer.
It is not solely
dependent upon
even this for its
sole attraction, as
ihe large and well-
ihaped palette,
and the folding
handle for its
support, would in
themselves be
sufficient to war-
rant its claims to
be remembered
in the choice of
portable boxes.

The third,
manufactured by

less than all three would suffice," each deserve Messrs J. Barnard & Sons of 19 Berners Street,
notice. is novel in the arrangement of its fittings. An

The first is a water-colour box sketch-book made ordinary japanned sketch-box, with compartments
by Messrs. Reeves & Sons of 113 Cheapside. conveniently arranged, it differs little from those
Here the art of packing has been carried to what already in the market, until you notice that the
one would think must be its limit. Not too bulky palette, sliding in a groove, forms a second lid
for a breast pocket, it contains in a space 7" x 5" to the contents, keeping all taut and avoiding a
a box, fitted with nine moist water colours— spill should the fastening of the main cover be
aurelin, yellow ochre, raw sienna, light red, per- accidentally opened. The space for the colours
manent crimson, madder, cobalt, Prussian blue themselves is provided with a hinged lid, so that
and Vandyke brown; a block 7" x 5" with 24 leaves the somewhat muddled interior of an ordinary
of Whatman's thick paper, a pocket for detached paint-box after a day's journey should be impos-
sketches, besides a brush-pencil. The small sible with one of these ingeniously planned and
japanned water-bottle with cup, must be carried neatly finished boxes.
82