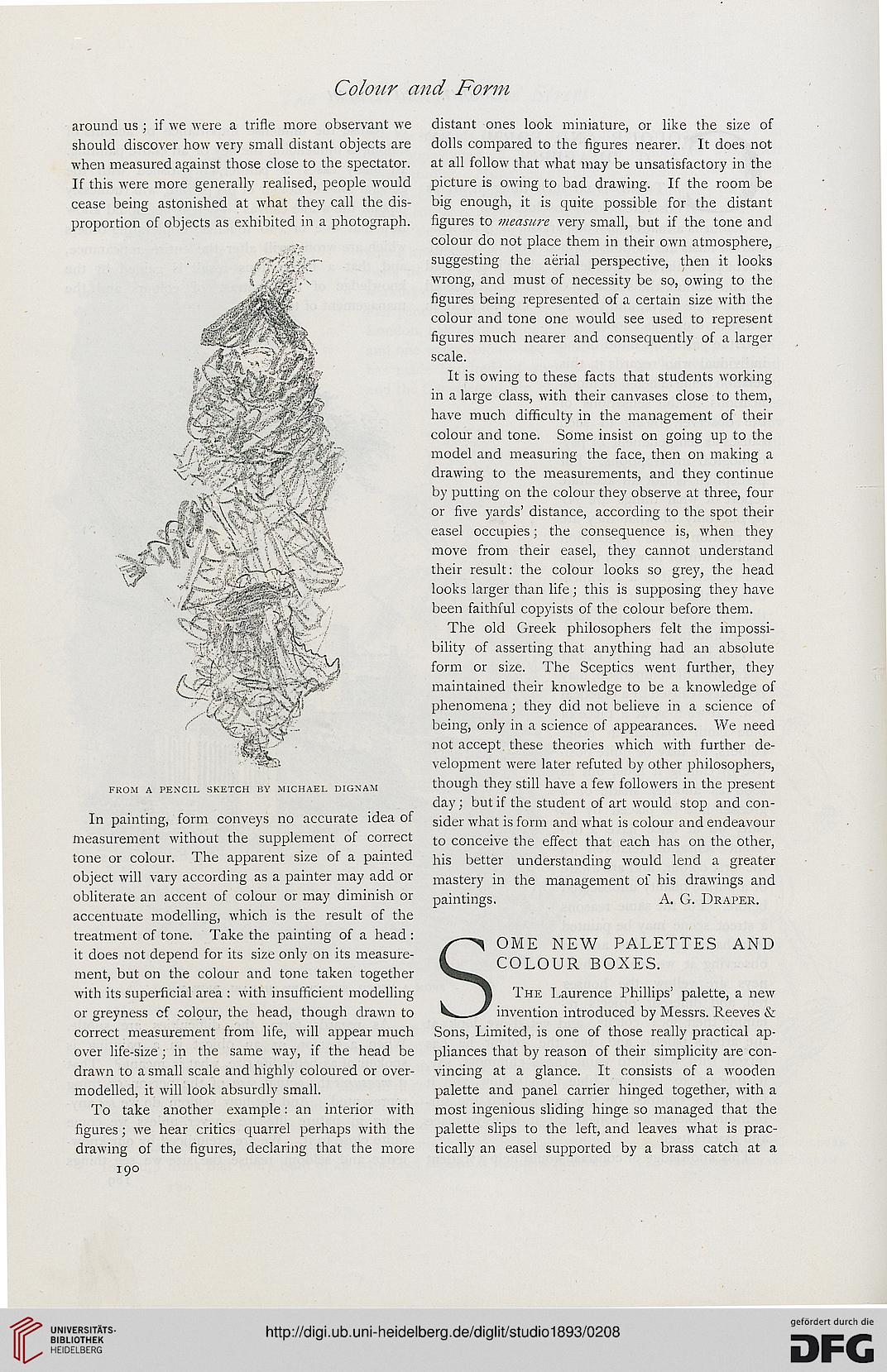 around us ; if we were a trifle more observant we
should discover how very small distant objects are
when measured against those close to the spectator.
If this were more generally realised, people would
cease being astonished at what they call the dis-
proportion of objects as exhibited in a photograph.

FROM A PENCIL SKETCH BY MICHAEL DIGN'AM

In painting, form conveys no accurate idea of
measurement without the supplement of correct
tone or colour. The apparent size of a painted
object will vary according as a painter may add or
obliterate an accent of colour or may diminish or
accentuate modelling, which is the result of the
treatment of tone. Take the painting of a head :
it does not depend for its size only on its measure-
ment, but on the colour and tone taken together
with its superficial area : with insufficient modelling
or greyness cf colour, the head, though drawn to
correct measurement from life, will appear much
over life-size ; in the same way, if the head be
drawn to a small scale and highly coloured or over-
modelled, it will look absurdly small.

To take another example: an interior with
figures; we hear critics quarrel perhaps with the
drawing of the figures, declaring that the more
190

distant ones look miniature, or like the size of
dolls compared to the figures nearer. It does not
at all follow that what may be unsatisfactory in the
picture is owing to bad drawing. If the room be
big enough, it is quite possible for the distant
figures to measure very small, but if the tone and
colour do not place them in their own atmosphere,
suggesting the aerial perspective, then it looks
wrong, and must of necessity be so, owing to the
figures being represented of a certain size with the
colour and tone one would see used to represent
figures much nearer and consequently of a larger
scale.

It is owing to these facts that students working
in a large class, with their canvases close to them,
have much difficulty in the management of their
colour and tone. Some insist on going up to the
model and measuring the face, then on making a
drawing to the measurements, and they continue
by putting on the colour they observe at three, four
or five yards' distance, according to the spot their
easel occupies; the consequence is, when they
move from their easel, they cannot understand
their result: the colour looks so grey, the head
looks larger than life; this is supposing they have
been faithful copyists of the colour before them.

The old Greek philosophers felt the impossi-
bility of asserting that anything had an absolute
form or size. The Sceptics went further, they
maintained their knowledge to be a knowledge of
phenomena; they did not believe in a science of
being, only in a science of appearances. We need
not accept these theories which with further de-
velopment were later refuted by other philosophers,
though they still have a few followers in the present
day; but if the student of art would stop and con-
sider what is form and what is colour and endeavour
to conceive the effect that each has on the other,
his better understanding would lend a greater
mastery in the management of his drawings and
paintings. A. G. Draper.

SOME NEW PALETTES AND
COLOUR BOXES.
The Laurence Phillips' palette, a new
invention introduced by Messrs. Reeves &
Sons, Limited, is one of those really practical ap-
pliances that by reason of their simplicity are con-
vincing at a glance. It consists of a wooden
palette and panel carrier hinged together, with a
most ingenious sliding hinge so managed that the
palette slips to the left, and leaves what is prac-
tically an easel supported by a brass catch at a