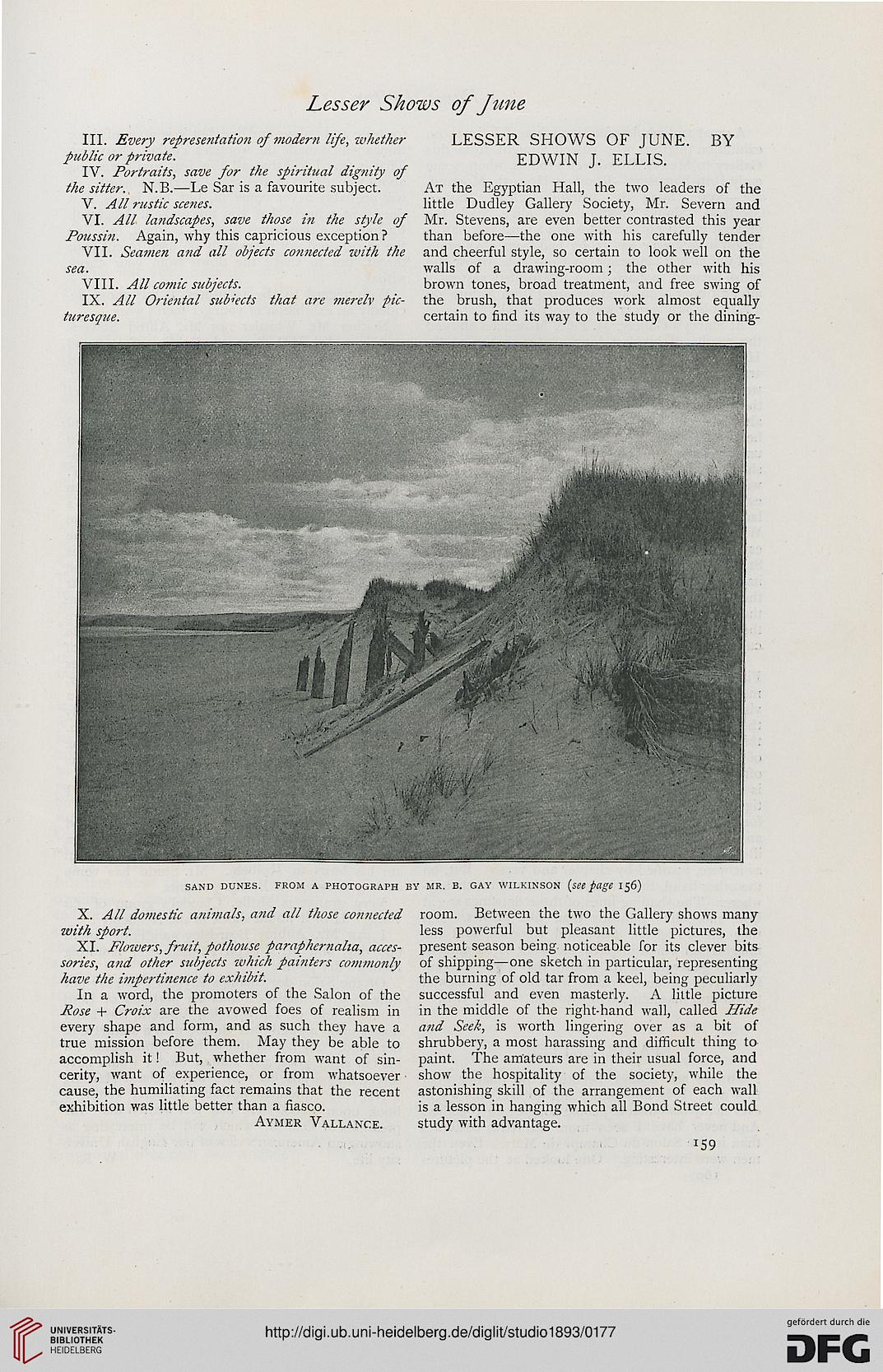 III. Every representation of modern life, whether LESSER SHOWS OF JUNE. BY
public or private. EDWIN J. ELLIS.

IV. Portraits, save for the spiritual dignity of

the sitter. N.B.—Le Sar is a favourite subject. At the Egyptian Hall, the two leaders of the

VI. All landscapes, save those in the style of Mr. Stevens, are even better contrasted this year
Poussin. Again, why this capricious exception ? than before—the one with his carefully tender

VII. Seamen and all objects connected with the and cheerful style, so certain to look well on the
sea. walls of a drawing-room ; the other with his

IX. All Oriental subnets that are merely pic- the brush, that produces work almost equally
turesque. certain to find its way to the study or the dining-

SAND DUNES. FROM A PHOTOGRAPH BY MR. B. GAY WILKINSON [seepage 156)

X. All domestic animals, and all those connected room. Between the two the Gallery shows many
with sport. less powerful but pleasant little pictures, the

XI. Flowers, fruit, pothouse paraphernalia, acces- present season being noticeable for its clever bits
sories, and other subjects which painters commonly of shipping—one sketch in particular, representing
have the impertinence to exhibit. the burning of old tar from a keel, being peculiarly

In a word, the promoters of the Salon of the successful and even masterly. A little picture

Pose + Croix are the avowed foes of realism in in the middle of the right-hand wall, called Hide

every shape and form, and as such they have a and Seek, is worth lingering over as a bit of

true mission before them. May they be able to shrubbery, a most harassing and difficult thing to

accomplish it! But, whether from want of sin- paint. The amateurs are in their usual force, and

cerity, want of experience, or from whatsoever show the hospitality of the society, while the

cause, the humiliating fact remains that the recent astonishing skill of the arrangement of each wall

exhibition was little better than a fiasco. is a lesson in hanging which all Bond Street could