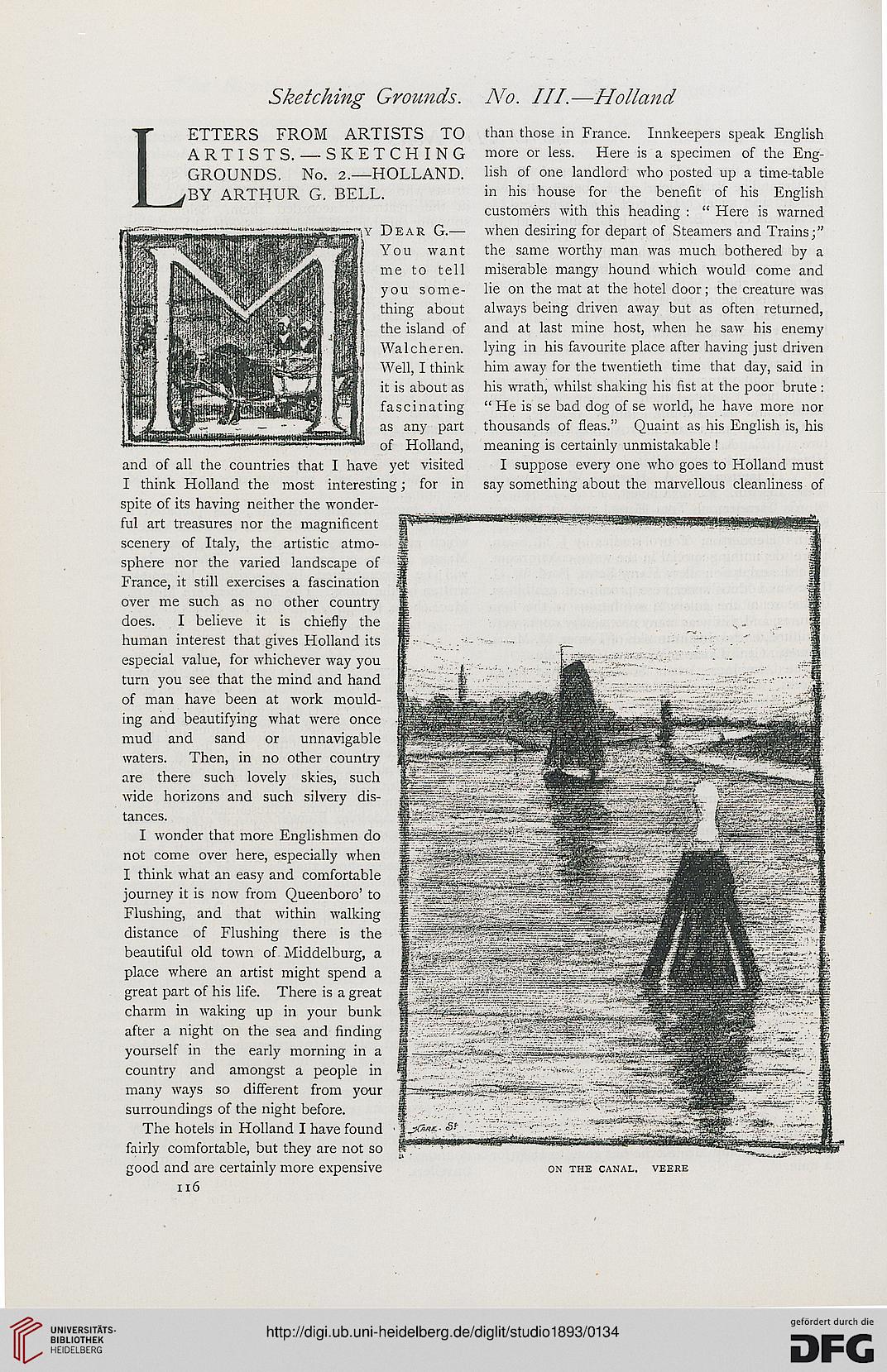 ETTERS FROM ARTISTS TO than those in France. Innkeepers speak English

ARTISTS._SKETCHING more or less. Here is a specimen of the Eng-

GROUNDS, No. 2.—HOLLAND, hsh of one landlord who posted up a time-table
^BY ARTHUR G. BELL. m his house for the benefit of his English

customers with this heading : " Here is warned
Dear G.— when desiring for depart of Steamers and Trains;"
You want the same worthy man was much bothered by a
me to tell miserable mangy hound which would come and
you some- lie on the mat at the hotel door; the creature was
thing about always being driven away but as often returned,
the island of and at last mine host, when he saw his enemy
Walcheren. lying in his favourite place after having just driven
Well, I think him away for the twentieth time that day, said in
it is about as his wrath, whilst shaking his fist at the poor brute :
fascinating "He is se bad dog of se world, he have more nor
as any part thousands of fleas." Quaint as his English is, his
of Holland, meaning is certainly unmistakable !
and of all the countries that I have yet visited I suppose every one who goes to Holland must
I think Holland the most interesting; for in say something about the marvellous cleanliness of
spite of its having neither the wonder-
ful art treasures nor the magnificent
scenery of Italy, the artistic atmo-
sphere nor the varied landscape of
France, it still exercises a fascination
over me such as no other country
does. I believe it is chiefly the
human interest that gives Holland its
especial value, for whichever way you
turn you see that the mind and hand
of man have been at work mould-
ing and beautifying what were once
mud and sand or unnavigable
waters. Then, in no other country
are there such lovely skies, such
wide horizons and such silvery dis-
tances.

I wonder that more Englishmen do
not come over here, especially when
I think what an easy and comfortable
journey it is now from Queenboro' to
Flushing, and that within walking
distance of Flushing there is the
beautiful old town of Middelburg, a
place where an artist might spend a
great part of his life. There is a great
charm in waking up in your bunk
after a night on the sea and finding
yourself in the early morning in a
country and amongst a people in
many ways so different from your
surroundings of the night before.

The hotels in Holland I have found
fairly comfortable, but they are not so

good and are certainly more expensive on the canal, veere