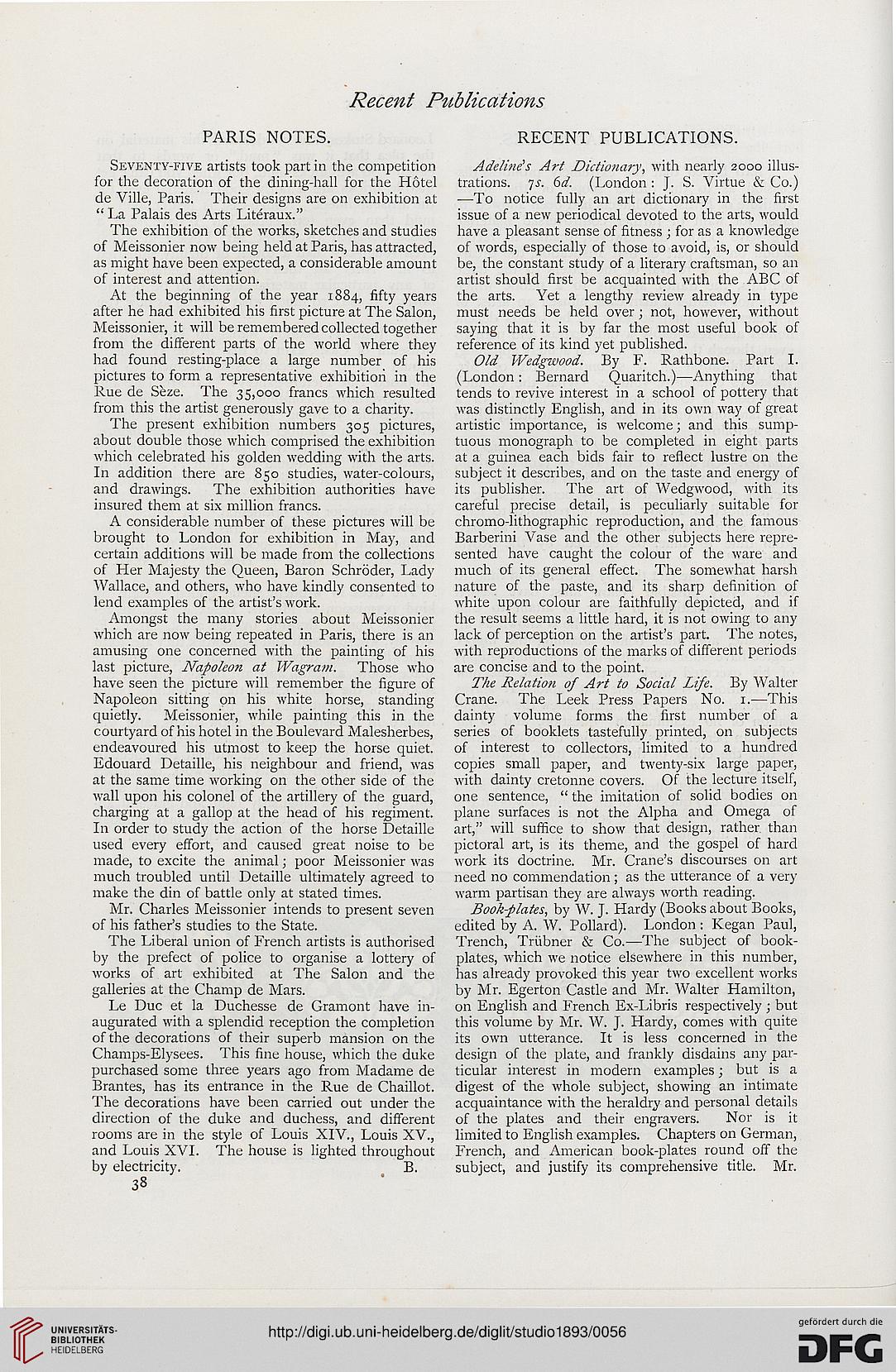 Seventy-five artists took part in the competition
for the decoration of the dining-hall for the Hotel
de Ville, Paris. Their designs are on exhibition at
" La Palais des Arts Literaux."

The exhibition of the works, sketches and studies
of Meissonier now being held at Paris, has attracted,
as might have been expected, a considerable amount
of interest and attention.

At the beginning of the year 1884, fifty years
after he had exhibited his first picture at The Salon,
Meissonier, it will be remembered collected together
from the different parts of the world where they
had found resting-place a large number of his
pictures to form a representative exhibition in the
Rue de Seze. The 35,000 francs which resulted
from this the artist generously gave to a charity.

The present exhibition numbers 305 pictures,
about double those which comprised the exhibition
which celebrated his golden wedding with the arts.
In addition there are 850 studies, water-colours,
and drawings. The exhibition authorities have
insured them at six million francs.

A considerable number of these pictures will be
brought to London for exhibition in May, and
certain additions will be made from the collections
of Her Majesty the Queen, Baron Schroder, Lady
Wallace, and others, who have kindly consented to
lend examples of the artist's work.

Amongst the many stories about Meissonier
which are now being repeated in Paris, there is an
amusing one concerned with the painting of his
last picture, Napoleon at Wagram. Those who
have seen the picture will remember the figure of
Napoleon sitting on his white horse, standing
quietly. Meissonier, while painting this in the
courtyard of his hotel in the Boulevard Malesherbes,
endeavoured his utmost to keep the horse quiet.
Edouard Detaille, his neighbour and friend, was
at the same time working on the other side of the
wall upon his colonel of the artillery of the guard,
charging at a gallop at the head of his regiment.
In order to study the action of the horse Detaille
used every effort, and caused great noise to be
made, to excite the animal; poor Meissonier was
much troubled until Detaille ultimately agreed to
make the din of battle only at stated times.

Mr. Charles Meissonier intends to present seven
of his father's studies to the State.

The Liberal union of French artists is authorised
by the prefect of police to organise a lottery of
works of art exhibited at The Salon and the
galleries at the Champ de Mars.

Le Due et la Duchesse de Gramont have in-
augurated with a splendid reception the completion
of the decorations of their superb mansion on the
Champs-Elysees. This fine house, which the duke
purchased some three years ago from Madame de
Brantes, has its entrance in the Rue de Chaillot.
The decorations have been carried out under the
direction of the duke and duchess, and different
rooms are in the style of Louis XIV., Louis XV.,
and Louis XVI. The house is lighted throughout
by electricity. B.
38

Adeline's Art Dictionary, with nearly 2000 illus-
trations, ys. 6d. (London : J. S. Virtue & Co.)
—To notice fully an art dictionary in the first
issue of a new periodical devoted to the arts, would
have a pleasant sense of fitness ; for as a knowledge
of words, especially of those to avoid, is, or should
be, the constant study of a literary craftsman, so an
artist should first be acquainted with the ABC of
the arts. Yet a lengthy review already in type
must needs be held over; not, however, without
saying that it is by far the most useful book of
reference of its kind yet published.

Old Wedgwood. By F. Rathbone. Part I.
(London : Bernard Quaritch.)—Anything that
tends to revive interest in a school of pottery that
was distinctly English, and in its own way of great
artistic importance, is welcome; and this sump-
tuous monograph to be completed in eight parts
at a guinea each bids fair to reflect lustre on the
subject it describes, and on the taste and energy of
its publisher. The art of Wedgwood, with its
careful precise detail, is peculiarly suitable for
chromo-lithographic reproduction, and the famous
Barberini Vase and the other subjects here repre-
sented have caught the colour of the ware and
much of its general effect. The somewhat harsh
nature of the paste, and its sharp definition of
white upon colour are faithfully depicted, and if
the result seems a little hard, it is not owing to any
lack of perception on the artist's part. The notes,
with reproductions of the marks of different periods
are concise and to the point.

The Relation of Art to Social Life. By Walter
Crane. The Leek Press Papers No. 1.—This
dainty volume forms the first number of a
series of booklets tastefully printed, on subjects
of interest to collectors, limited to a hundred
copies small paper, and twenty-six large paper,
with dainty cretonne covers. Of the lecture itself,
one sentence, " the imitation of solid bodies on
plane surfaces is not the Alpha and Omega of
art," will suffice to show that design, rather than
pictoral art, is its theme, and the gospel of hard
work its doctrine. Mr. Crane's discourses on art
need no commendation; as the utterance of a very
warm partisan they are always worth reading.

Book-plates, by W. J. Hardy (Books about Books,
edited by A. W. Pollard). London: Kegan Paul,
Trench, Triibner & Co.—The subject of book-
plates, which we notice elsewhere in this number,
has already provoked this year two excellent works
by Mr. Egerton Castle and Mr. Walter Hamilton,
on English and French Ex-Libris respectively ; but
this volume by Mr. W. J. Hardy, comes with quite
its own utterance. It is less concerned in the
design of the plate, and frankly disdains any par-
ticular interest in modern examples; but is a
digest of the whole subject, showing an intimate
acquaintance with the heraldry and personal details
of the plates and their engravers. Nor is it
limited to English examples. Chapters on German,
French, and American book-plates round off the
subject, and justify its comprehensive title. Mr.