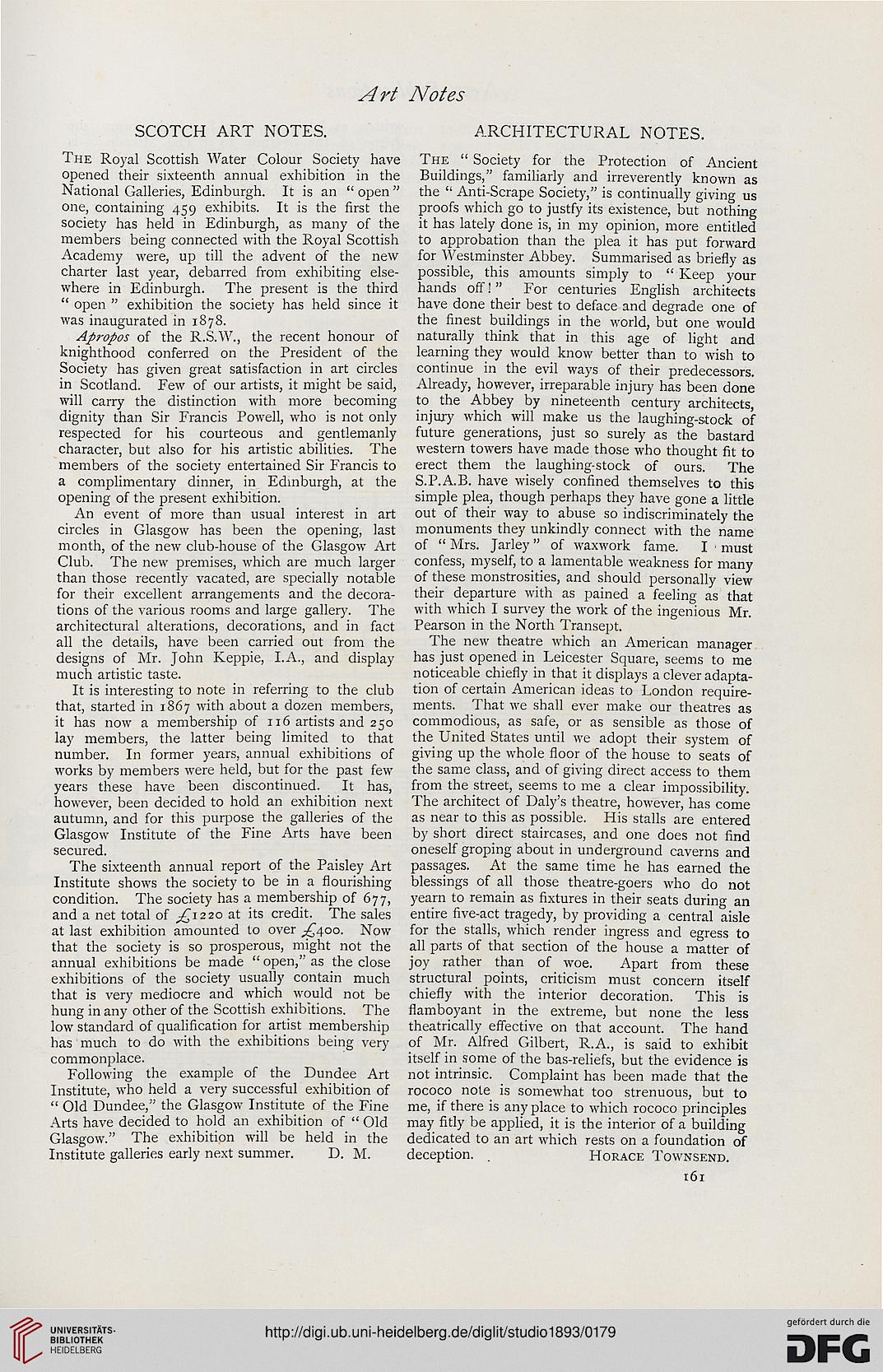 The Royal Scottish Water Colour Society have
opened their sixteenth annual exhibition in the
National Galleries, Edinburgh. It is an " open "
one, containing 459 exhibits. It is the first the
society has held in Edinburgh, as many of the
members being connected with the Royal Scottish
Academy were, up till the advent of the new
charter last year, debarred from exhibiting else-
where in Edinburgh. The present is the third
" open " exhibition the society has held since it
was inaugurated in 1878.

Apropos of the R.S.W., the recent honour of
knighthood conferred on the President of the
Society has given great satisfaction in art circles
in Scotland. Few of our artists, it might be said,
will carry the distinction with more becoming
dignity than Sir Francis Powell, who is not only
respected for his courteous and gentlemanly
character, but also for his artistic abilities. The
members of the society entertained Sir Francis to
a complimentary dinner, in Edinburgh, at the
opening of the present exhibition.

An event of more than usual interest in art
circles in Glasgow has been the opening, last
month, of the new club-house of the Glasgow Art
Club. The new premises, which are much larger
than those recently vacated, are specially notable
for their excellent arrangements and the decora-
tions of the various rooms and large gallery. The
architectural alterations, decorations, and in fact
all the details, have been carried out from the
designs of Mr. John Keppie, I.A., and display
much artistic taste.

It is interesting to note in referring to the club
that, started in 1867 with about a dozen members,
it has now a membership of 116 artists and 250
lay members, the latter being limited to that
number. In former years, annual exhibitions of
works by members were held, but for the past few
years these have been discontinued. It has,
however, been decided to hold an exhibition next
autumn, and for this purpose the galleries of the
Glasgow Institute of the Fine Arts have been
secured.

The sixteenth annual report of the Paisley Art
Institute shows the society to be in a flourishing
condition. The society has a membership of 677,
and a net total of ^1220 at its credit. The sales
at last exhibition amounted to over ^400. Now
that the society is so prosperous, might not the
annual exhibitions be made " open," as the close
exhibitions of the society usually contain much
that is very mediocre and which would not be
hung in any other of the Scottish exhibitions. The
low standard of qualification for artist membership
has much to do with the exhibitions being very
commonplace.

Following the example of the Dundee Art
Institute, who held a very successful exhibition of
" Old Dundee," the Glasgow Institute of the Fine
Arts have decided to hold an exhibition of " Old
Glasgow." The exhibition will be held in the
Institute galleries early next summer. D. M.

The " Society for the Protection of Ancient
Buildings," familiarly and irreverently known as
the " Anti-Scrape Society," is continually giving us
proofs which go to justfy its existence, but nothing
it has lately done is, in my opinion, more entitled
to approbation than the plea it has put forward
for Westminster Abbey. Summarised as briefly as
possible, this amounts simply to " Keep your
hands off!" For centuries English architects
have done their best to deface and degrade one of
the finest buildings in the world, but one would
naturally think that in this age of light and
learning they would know better than to wish to
continue in the evil ways of their predecessors.
Already, however, irreparable injury has been done
to the Abbey by nineteenth century architects,
injury which will make us the laughing-stock of
future generations, just so surely as the bastard
western towers have made those who thought fit to
erect them the laughing-stock of ours. The
S.P.A.B. have wisely confined themselves to this
simple plea, though perhaps they have gone a little
out of their way to abuse so indiscriminately the
monuments they unkindly connect with the name
of " Mrs. Jarley" of waxwork fame. I must
confess, myself, to a lamentable weakness for many
of these monstrosities, and should personally view
their departure with as pained a feeling as that
with which I survey the work of the ingenious Mr.
Pearson in the North Transept.

The new theatre which an American manager
has just opened in Leicester Square, seems to me
noticeable chiefly in that it displays a clever adapta-
tion of certain American ideas to London require-
ments. That we shall ever make our theatres as
commodious, as safe, or as sensible as those of
the United States until we adopt their system of
giving up the whole floor of the house to seats of
the same class, and of giving direct access to them
from the street, seems to me a clear impossibility.
The architect of Daly's theatre, however, has come
as near to this as possible. His stalls are entered
by short direct staircases, and one does not find
oneself groping about in underground caverns and
passages. At the same time he has earned the
blessings of all those theatre-goers who do not
yearn to remain as fixtures in their seats during an
entire five-act tragedy, by providing a central aisle
for the stalls, which render ingress and egress to
all parts of that section of the house a matter of
joy rather than of woe. Apart from these
structural points, criticism must concern itself
chiefly with the interior decoration. This is
flamboyant in the extreme, but none the less
theatrically effective on that account. The hand
of Mr. Alfred Gilbert, R.A., is said to exhibit
itself in some of the bas-reliefs, but the evidence is
not intrinsic. Complaint has been made that the
rococo note is somewhat too strenuous, but to
me, if there is any place to which rococo principles
may fitly be applied, it is the interior of a building
dedicated to an art which rests on a foundation of
deception. . Horace Townsend.