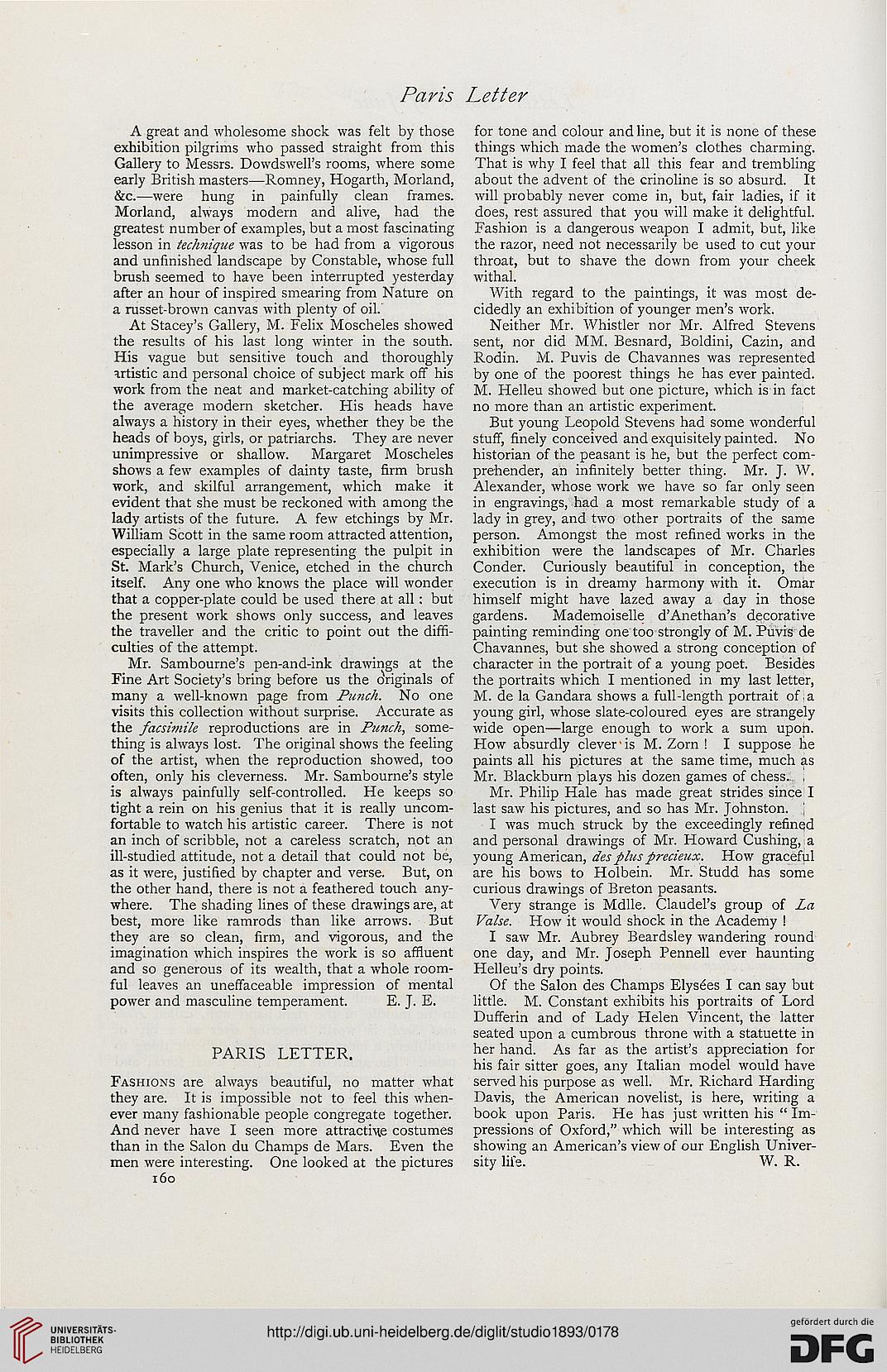 A great and wholesome shock was felt by those
exhibition pilgrims who passed straight from this
Gallery to Messrs. DowdswelPs rooms, where some
early British masters—Romney, Hogarth, Morland,
&c.—were hung in painfully clean frames.
Morland, always modern and alive, had the
greatest number of examples, but a most fascinating
lesson in technique was to be had from a vigorous
and unfinished landscape by Constable, whose full
brush seemed to have been interrupted yesterday
after an hour of inspired smearing from Nature on
a russet-brown canvas with plenty of oil.

At Stacey's Gallery, M. Felix Moscheles showed
the results of his last long winter in the south.
His vague but sensitive touch and thoroughly
irtistic and personal choice of subject mark off his
work from the neat and market-catching ability of
the average modern sketcher. His heads have
always a history in their eyes, whether they be the
heads of boys, girls, or patriarchs. They are never
unimpressive or shallow. Margaret Moscheles
shows a few examples of dainty taste, firm brush
work, and skilful arrangement, which make it
evident that she must be reckoned with among the
lady artists of the future. A few etchings by Mr.
William Scott in the same room attracted attention,
especially a large plate representing the pulpit in
St. Mark's Church, Venice, etched in the church
itself. Any one who knows the place will wonder
that a copper-plate could be used there at all: but
the present work shows only success, and leaves
the traveller and the critic to point out the diffi-
culties of the attempt.

Mr. Sambourne's pen-and-ink drawings at the
Fine Art Society's bring before us the originals of
many a well-known page from Punch. No one
visits this collection without surprise. Accurate as
the facsimile reproductions are in Pimch, some-
thing is always lost. The original shows the feeling
of the artist, when the reproduction showed, too
often, only his cleverness. Mr. Sambourne's style
is always painfully self-controlled. He keeps so
tight a rein on his genius that it is really uncom-
fortable to watch his artistic career. There is not
an inch of scribble, not a careless scratch, not an
ill-studied attitude, not a detail that could not be,
as it were, justified by chapter and verse. But, on
the other hand, there is not a feathered touch any-
where. The shading lines of these drawings are, at
best, more like ramrods than like arrows. But
they are so clean, firm, and vigorous, and the
imagination which inspires the work is so affluent
and so generous of its wealth, that a whole room-
ful leaves an uneffaceable impression of mental
power and masculine temperament. E. J. E.

Fashions are always beautiful, no matter what
they are. It is impossible not to feel this when-
ever many fashionable people congregate together.
And never have I seen more attractixe costumes
than in the Salon du Champs de Mars. Even the
men were interesting. One looked at the pictures
160

for tone and colour and line, but it is none of these
things which made the women's clothes charming.
That is why I feel that all this fear and trembling
about the advent of the crinoline is so absurd. It
will probably never come in, but, fair ladies, if it
does, rest assured that you will make it delightful.
Fashion is a dangerous weapon I admit, but, like
the razor, need not necessarily be used to cut your
throat, but to shave the down from your cheek
withal.

With regard to the paintings, it was most de-
cidedly an exhibition of younger men's work.

Neither Mr. Whistler nor Mr. Alfred Stevens
sent, nor did MM. Besnard, Boldini, Cazin, and
Rodin. M. Puvis de Chavannes was represented
by one of the poorest things he has ever painted.
M. Helleu showed but one picture, which is in fact
no more than an artistic experiment.

But young Leopold Stevens had some wonderful
stuff, finely conceived and exquisitely painted. No
historian of the peasant is he, but the perfect com-
prehender, an infinitely better thing. Mr. J. W.
Alexander, whose work we have so far only seen
in engravings, had a most remarkable study of a
lady in grey, and two other portraits of the same
person. Amongst the most refined works in the
exhibition were the landscapes of Mr. Charles
Conder. Curiously beautiful in conception, the
execution is in dreamy harmony with it. Omar
himself might have lazed away a day in those
gardens. Mademoiselle d'Anethan's decorative
painting reminding one too strongly of M. Puvis de
Chavannes, but she showed a strong conception of
character in the portrait of a young poet. Besides
the portraits which I mentioned in my last letter,
M. de la Gandara shows a full-length portrait of .a
young girl, whose slate-coloured eyes are strangely
wide open—large enough to work a sum upon.
How absurdly clever'is M. Zorn ! I suppose he
paints all his pictures at the same time, much as
Mr. Blackburn plays his dozen games of chess.. ,

Mr. Philip Hale has made great strides since I
last saw his pictures, and so has Mr. Johnston.

I was much struck by the exceedingly refined
and personal drawings of Mr. Howard Cushing, a
young American, desplusprecieux. How graceful
are his bows to Holbein. Mr. Studd has some
curious drawings of Breton peasants.

Very strange is Mdlle. ClaudePs group of La
False. How it would shock in the Academy !

Of the Salon des Champs Elys^es I can say but
little. M. Constant exhibits his portraits of Lord
Dufferin and of Lady Helen Vincent, the latter
seated upon a cumbrous throne with a statuette in
her hand. As far as the artist's appreciation for
his fair sitter goes, any Italian model would have
served his purpose as well. Mr. Richard Harding
Davis, the American novelist, is here, writing a
book upon Paris. He has just written his " Im-
pressions of Oxford," which will be interesting as
showing an American's view of our English Univer-
sity life. W. R.