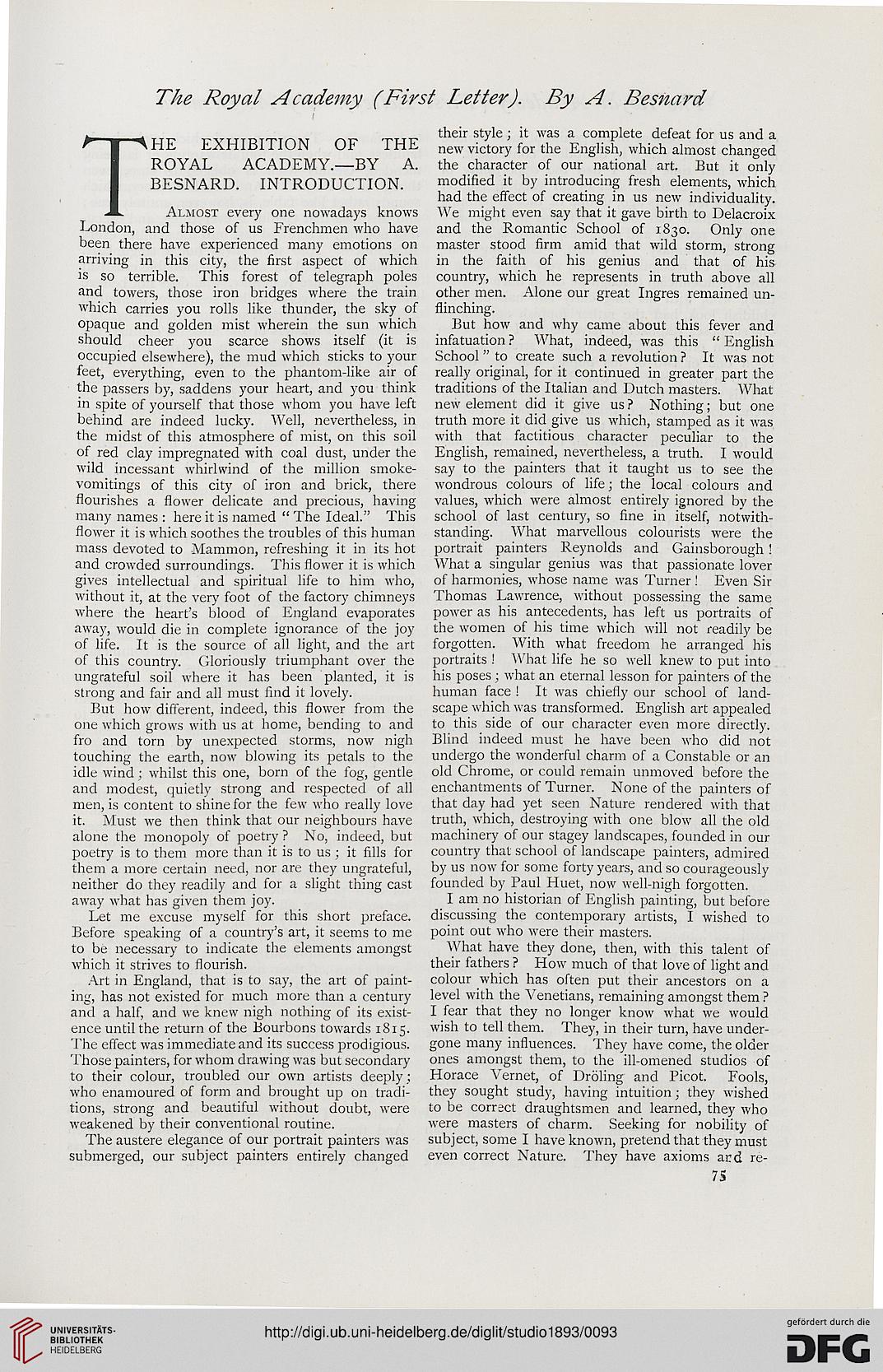 HE EXHIBITION OF THE
ROYAL ACADEMY.—BY A.
BESNARD. INTRODUCTION.

Almost every one nowadays knows

London, and those of us Frenchmen who have
been there have experienced many emotions on
arriving in this city, the first aspect of which
is so terrible. This forest of telegraph poles
and towers, those iron bridges where the train
w-hich carries you rolls like thunder, the sky of
opaque and golden mist wherein the sun which
should cheer you scarce shows itself (it is
occupied elsewhere), the mud which sticks to your
feet, everything, even to the phantom-like air of
the passers by, saddens your heart, and you think
in spite of yourself that those whom you have left
behind are indeed lucky. Well, nevertheless, in
the midst of this atmosphere of mist, on this soil
of red clay impregnated with coal dust, under the
wild incessant whirlwind of the million smoke-
vomitings of this city of iron and brick, there
flourishes a flower delicate and precious, having
many names : here it is named " The Ideal." This
flower it is which soothes the troubles of this human
mass devoted to Mammon, refreshing it in its hot
and crowded surroundings. This flower it is which
gives intellectual and spiritual life to him who,
without it, at the very foot of the factory chimneys
where the heart's blood of England evaporates
away, would die in complete ignorance of the joy
of life. It is the source of all light, and the art
of this country. Gloriously triumphant over the
ungrateful soil where it has been planted, it is
strong and fair and all must find it lovely.

But how different, indeed, this flower from the
one which grows with us at home, bending to and
fro and torn by unexpected storms, now nigh
touching the earth, now blowing its petals to the
idle wind ; whilst this one, born of the fog, gentle
and modest, quietly strong and respected of all
men, is content to shine for the few who really love
it. Must we then think that our neighbours have
alone the monopoly of poetry ? No, indeed, but
poetry is to them more than it is to us ; it fills for
them a more certain need, nor are they ungrateful,
neither do they readily and for a slight thing cast
away what has given them joy.

Let me excuse myself for this short preface.
Before speaking of a country's art, it seems to me
to be necessary to indicate the elements amongst
which it strives to flourish.

Art in England, that is to say, the art of paint-
ing, has not existed for much more than a century
and a half, and we knew nigh nothing of its exist-
ence until the return of the Bourbons towards 1815.
The effect was immediate and its success prodigious.
Those painters, for whom drawing was but secondary
to their colour, troubled our own artists deeply ;
who enamoured of form and brought up on tradi-
tions, strong and beautiful without doubt, were
weakened by their conventional routine.

The austere elegance of our portrait painters was
submerged, our subject painters entirely changed

their style; it was a complete defeat for us and a
new victory for the English, which almost changed
the character of our national art. But it only
modified it by introducing fresh elements, which
had the effect of creating in us new individuality.
We might even say that it gave birth to Delacroix
and the Romantic School of 1830. Only one
master stood firm amid that wild storm, strong
in the faith of his genius and that of his
country, which he represents in truth above all
other men. Alone our great Ingres remained un-
flinching.

But how and why came about this fever and
infatuation ? What, indeed, was this " English
School " to create such a revolution ? It was not
really original, for it continued in greater part the
traditions of the Italian and Dutch masters. What
new element did it give us? Nothing; but one
truth more it did give us which, stamped as it was
with that factitious character peculiar to the
English, remained, nevertheless, a truth. I would
say to the painters that it taught us to see the
wondrous colours of life; the local colours and
values, which were almost entirely ignored by the
school of last century, so fine in itself, notwith-
standing. What marvellous colourists were the
portrait painters Reynolds and Gainsborough !
What a singular genius was that passionate lover
of harmonies, whose name was Turner! Even Sir
Thomas Lawrence, without possessing the same
power as his antecedents, has left us portraits of
the women of his time which will not readily be
forgotten. With what freedom he arranged his
portraits ! 'What life he so well knew to put into
his poses ; what an eternal lesson for painters of the
human face ! It was chiefly our school of land-
scape which was transformed. English art appealed
to this side of our character even more directly.
Blind indeed must he have been who did not
undergo the wonderful charm of a Constable or an
old Chrome, or could remain unmoved before the
enchantments of Turner. None of the painters of
that day had yet seen Nature rendered with that
truth, which, destroying with one blow all the old
machinery of our stagey landscapes, founded in our
country that school of landscape painters, admired
by us now for some forty years, and so courageously
founded by Paul Huet, now well-nigh forgotten.

I am no historian of English painting, but before
discussing the contemporary artists, I wished to
point out who were their masters.

What have they done, then, with this talent of
their fathers ? How much of that love of light and
colour which has often put their ancestors on a
level with the Venetians, remaining amongst them ?
I fear that they no longer know what we would
wish to tell them. They, in their turn, have under-
gone many influences. They have come, the older
ones amongst them, to the ill-omened studios of
Horace Vernet, of Droling and Picot. Fools,
they sought study, having intuition; they wished
to be corrsct draughtsmen and learned, they who
were masters of charm. Seeking for nobility of
subject, some I have known, pretend that they must
even correct Nature. They have axioms acd re-