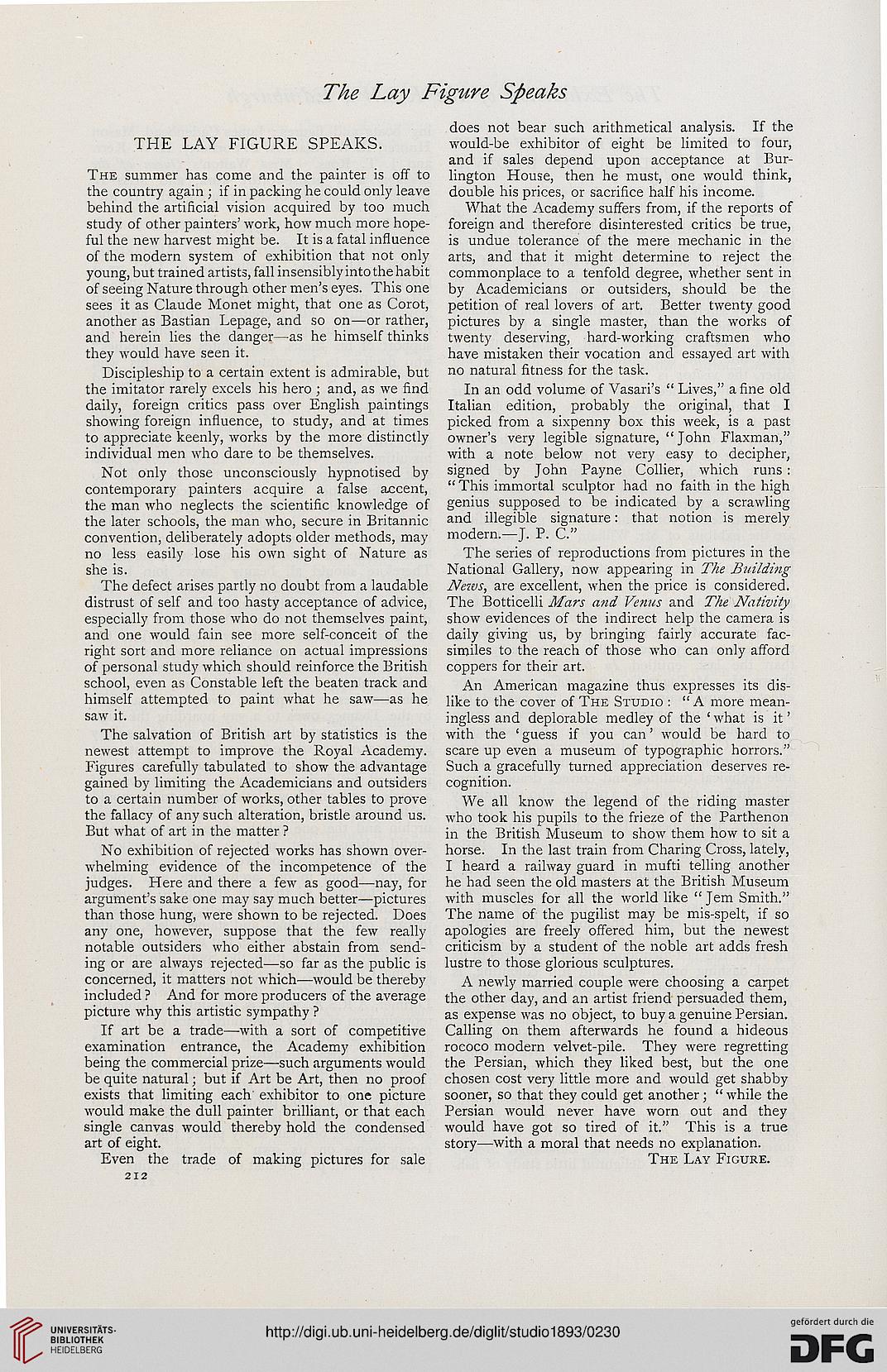 The summer has come and the painter is off to
the country again ; if in packing he could only leave
behind the artificial vision acquired by too much
study of other painters' work, how much more hope-
ful the new harvest might be. It is a fatal influence
of the modern system of exhibition that not only
young,but trained artists, fall insensiblyintothehabit
of seeing Nature through other men's eyes. This one
sees it as Claude Monet might, that one as Corot,
another as Bastian Lepage, and so on—or rather,
and herein lies the danger—as he himself thinks
they would have seen it.

Discipleship to a certain extent is admirable, but
the imitator rarely excels his hero ; and, as we find
daily, foreign critics pass over English paintings
showing foreign influence, to study, and at times
to appreciate keenly, works by the more distinctly
individual men who dare to be themselves.

Not only those unconsciously hypnotised by
contemporary painters acquire a false accent,
the man who neglects the scientific knowledge of
the later schools, the man who, secure in Britannic
convention, deliberately adopts older methods, may
no less easily lose his own sight of Nature as
she is.

The defect arises partly no doubt from a laudable
distrust of self and too hasty acceptance of advice,
especially from those who do not themselves paint,
and one would fain see more self-conceit of the
right sort and more reliance on actual impressions
of personal study which should reinforce the British
school, even as Constable left the beaten track and
himself attempted to paint what he saw—as he
saw it.

The salvation of British art by statistics is the
newest attempt to improve the Royal Academy.
Figures carefully tabulated to show the advantage
gained by limiting the Academicians and outsiders
to a certain number of works, other tables to prove
the fallacy of any such alteration, bristle around us.
But what of art in the matter ?

No exhibition of rejected works has shown over-
whelming evidence of the incompetence of the
judges. Here and there a few as good—nay, for
argument's sake one may say much better—pictures
than those hung, were shown to be rejected. Does
any one, however, suppose that the few really
notable outsiders who either abstain from send-
ing or are always rejected—so far as the public is
concerned, it matters not which—would be thereby
included ? And for more producers of the average
picture why this artistic sympathy ?

If art be a trade—with a sort of competitive
examination entrance, the Academy exhibition
being the commercial prize—such arguments would
be quite natural; but if Art be Art, then no proof
exists that limiting each exhibitor to one picture
would make the dull painter brilliant, or that each
single canvas would thereby hold the condensed
art of eight.

Even the trade of making pictures for sale
212

does not bear such arithmetical analysis. If the
would-be exhibitor of eight be limited to four,
and if sales depend upon acceptance at Bur-
lington House, then he must, one would think,
double his prices, or sacrifice half his income.

What the Academy suffers from, if the reports of
foreign and therefore disinterested critics be true,
is undue tolerance of the mere mechanic in the
arts, and that it might determine to reject the
commonplace to a tenfold degree, whether sent in
by Academicians or outsiders, should be the
petition of real lovers of art. Better twenty good
pictures by a single master, than the works of
twenty deserving, hard-working craftsmen who
have mistaken their vocation and essayed art with
no natural fitness for the task.

In an odd volume of Vasari's " Lives," a fine old
Italian edition, probably the original, that I
picked from a sixpenny box this week, is a past
owner's very legible signature, "John Flaxman,"
with a note below not very easy to decipher,
signed by John Payne Collier, which runs :
" This immortal sculptor had no faith in the high
genius supposed to be indicated by a scrawling
and illegible signature: that notion is merely
modern.—J. P. C."

The series of reproductions from pictures in the
National Gallery, now appearing in The Building
News, are excellent, when the price is considered.
The Botticelli Mars and Venus and The Nativity
show evidences of the indirect help the camera is
daily giving us, by bringing fairly accurate fac-
similes to the reach of those who can only afford
coppers for their art.

An American magazine thus expresses its dis-
like to the cover of The Studio : " A more mean-
ingless and deplorable medley of the 'what is it'
with the ' guess if you can' would be hard to
scare up even a museum of typographic horrors."
Such a gracefully turned appreciation deserves re-
cognition.

We all know the legend of the riding master
who took his pupils to the frieze of the Parthenon
in the British Museum to show them how to sit a
horse. In the last train from Charing Cross, lately,
I heard a railway guard in mufti telling another
he had seen the old masters at the British Museum
with muscles for all the world like " Jem Smith."
The name of the pugilist may be mis-spelt, if so
apologies are freely offered him, but the newest
criticism by a student of the noble art adds fresh
lustre to those glorious sculptures.

A newly married couple were choosing a carpet
the other day, and an artist friend persuaded them,
as expense was no object, to buy a genuine Persian.
Calling on them afterwards he found a hideous
rococo modern velvet-pile. They were regretting
the Persian, which they liked best, but the one
chosen cost very little more and would get shabby
sooner, so that they could get another ; " while the
Persian would never have worn out and they
would have got so tired of it." This is a true
story—with a moral that needs no explanation.