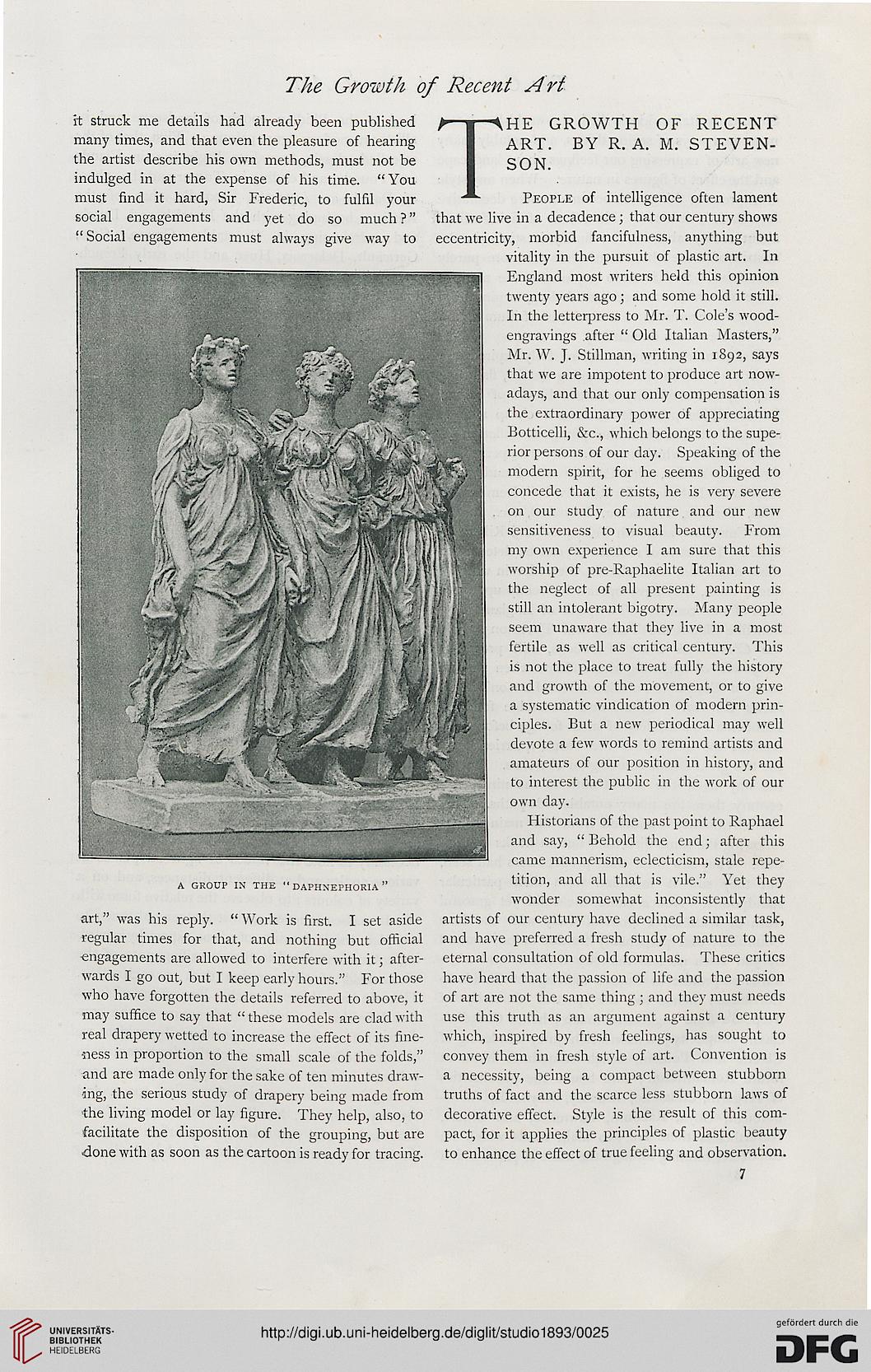 rt struck me details had already been published f—^HE GROWTH OF RECENT
many times, and that even the pleasure of hearing ART. BY R. A. M. STEVEN-

the artist describe his own methods, must not be SON
indulged in at the expense of his time. "You

must find it hard, Sir Frederic, to fulfil your People of intelligence often lament

vitality in the pursuit of plastic art. In
England most writers held this opinion
twenty years ago; and some hold it still.
In the letterpress to Mr. T. Cole's wood-
engravings after " Old Italian Masters,"
Mr. W. J. Stillman, writing in 1892, says
that we are impotent to produce art now-
adays, and that our only compensation is
the extraordinary power of appreciating
Botticelli, &c, which belongs to the supe-
rior persons of our day. Speaking of the
modern spirit, for he seems obliged to
concede that it exists, he is very severe
on our study of nature and our new
sensitiveness to visual beauty. From
my own experience I am sure that this
worship of pre-Raphaelite Italian art to
the neglect of all present painting is
still an intolerant bigotry. Many people
seem unaware that they live in a most
fertile as well as critical century. This
is not the place to treat fully the history
and growth of the movement, or to give
a systematic vindication of modern prin-
ciples. But a new periodical may well
devote a few words to remind artists and
amateurs of our position in history, and
to interest the public in the work of our
own day.

Historians of the past point to Raphael
and say, " Behold the end; after this
came mannerism, eclecticism, stale repe-
tition, and all that is vile." Yet they
wonder somewhat inconsistently that
art," was his reply. " Work is first. I set aside artists of our century have declined a similar task,
regular times for that, and nothing but official and have preferred a fresh study of nature to the
engagements are allowed to interfere with it; after- eternal consultation of old formulas. These critics
wards I go out; but I keep early hours." For those have heard that the passion of life and the passion
who have forgotten the details referred to above, it of art are not the same thing ; and they must needs
may suffice to say that " these models are clad with use this truth as an argument against a century
real drapery wetted to increase the effect of its fine- which, inspired by fresh feelings, has sought to
ness in proportion to the small scale of the folds," convey them in fresh style of art. Convention is
and are made only for the sake of ten minutes draw- a necessity, being a compact between stubborn
ing, the serious study of drapery being made from truths of fact and the scarce less stubborn laws of
the living model or lay figure. They help, also, to decorative effect. Style is the result of this corn-
facilitate the disposition of the grouping, but are pact, for it applies the principles of plastic beauty
done with as soon as the cartoon is ready for tracing, to enhance the effect of true feeling and observation.

A GROUP IN THE " DAPHNETHORIA