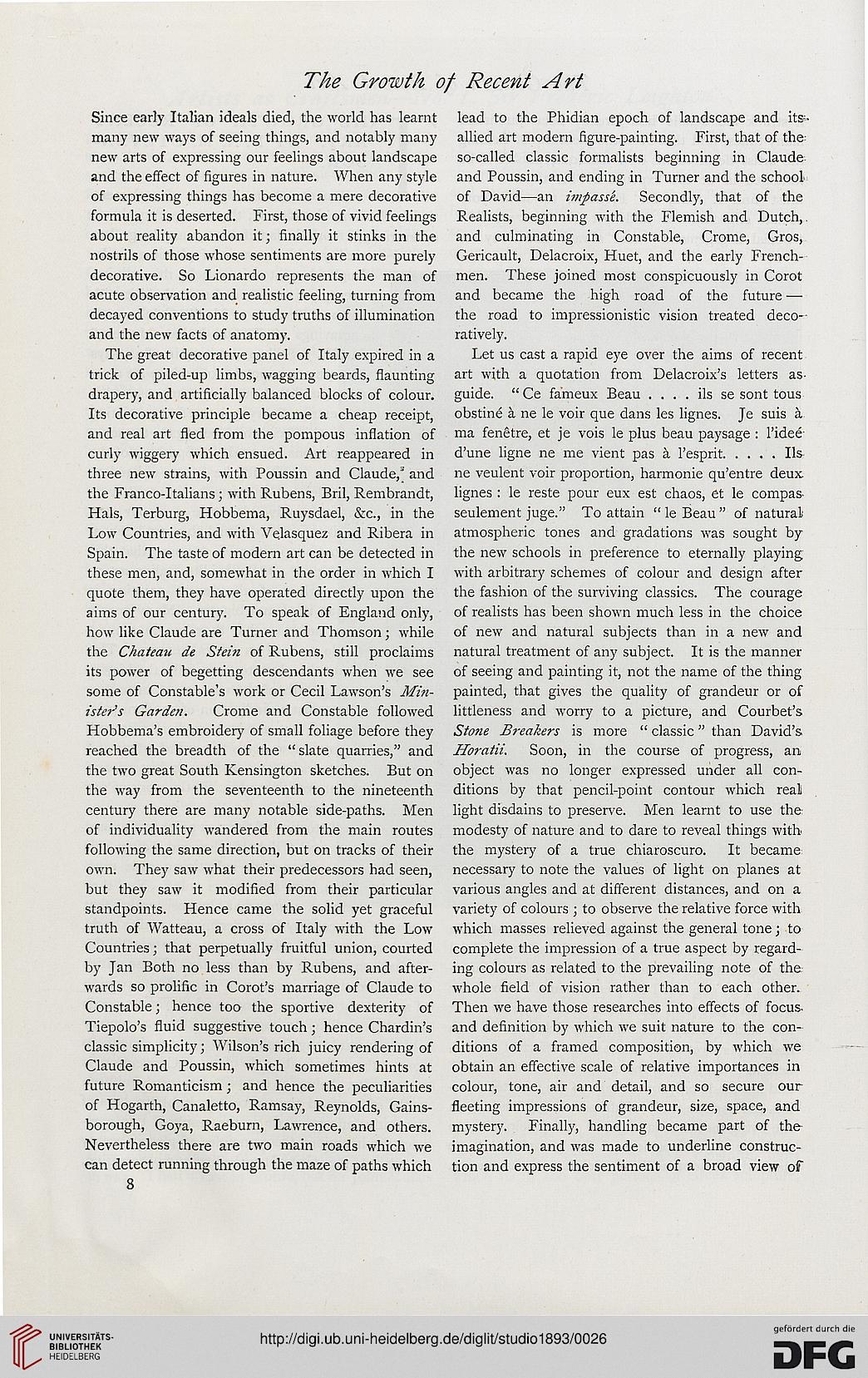 Since early Italian ideals died, the world has learnt
many new ways of seeing things, and notably many
new arts of expressing our feelings about landscape
and the effect of figures in nature. When any style
of expressing things has become a mere decorative
formula it is deserted. First, those of vivid feelings
about reality abandon it; finally it stinks in the
nostrils of those whose sentiments are more purely
decorative. So Lionardo represents the man of
acute observation and realistic feeling, turning from
decayed conventions to study truths of illumination
and the new facts of anatomy.

The great decorative panel of Italy expired in a
trick of piled-up limbs, wagging beards, flaunting
drapery, and artificially balanced blocks of colour.
Its decorative principle became a cheap receipt,
and real art fled from the pompous inflation of
curly wiggery which ensued. Art reappeared in
three new strains, with Poussin and Claude/ and
the Franco-Italians; with Rubens, Bril, Rembrandt,
Hals, Terburg, Hobbema, Ruysdael, &c, in the
Low Countries, and with Velasquez and Ribera in
Spain. The taste of modern art can be detected in
these men, and, somewhat in the order in which I
quote them, they have operated directly upon the
aims of our century. To speak of England only,
how like Claude are Turner and Thomson; while
the Chateau de Stein of Rubens, still proclaims
its power of begetting descendants when we see
some of Constable's work or Cecil Lawson's Ag-
ister's Garden. Crome and Constable followed
Hobbema's embroidery of small foliage before they
reached the breadth of the "slate quarries," and
the two great South Kensington sketches. But on
the way from the seventeenth to the nineteenth
century there are many notable side-paths. Men
of individuality wandered from the main routes
following the same direction, but on tracks of their
own. They saw what their predecessors had seen,
but they saw it modified from their particular
standpoints. Hence came the solid yet graceful
truth of Watteau, a cross of Italy with the Low
Countries; that perpetually fruitful union, courted
by Jan Both no less than by Rubens, and after-
wards so prolific in Corot's marriage of Claude to
Constable; hence too the sportive dexterity of
Tiepolo's fluid suggestive touch ; hence Chardin's
classic simplicity; Wilson's rich juicy rendering of
Claude and Poussin, which sometimes hints at
future Romanticism ; and hence the peculiarities
of Hogarth, Canaletto, Ramsay, Reynolds, Gains-
borough, Goya, Raeburn, Lawrence, and others.
Nevertheless there are two main roads which we
can detect running through the maze of paths which

lead to the Phidian epoch of landscape and its-
allied art modern figure-painting. First, that of the
so-called classic formalists beginning in Claude
and Poussin, and ending in Turner and the school
of David—an impasse. Secondly, that of the
Realists, beginning with the Flemish and Dutch,
and culminating in Constable, Crome, Gros,
Gericault, Delacroix, Huet, and the early French-
men. These joined most conspicuously in Corot
and became the high road of the future ■—
the road to impressionistic vision treated deco-
ratively.

ne veulent voir proportion, harmonie qu'entre deux
lignes : le reste pour eux est chaos, et le compas-
seulement juge." To attain " le Beau " of natural
atmospheric tones and gradations was sought by
the new schools in preference to eternally playing
with arbitrary schemes of colour and design after
the fashion of the surviving classics. The courage
of realists has been shown much less in the choice
of new and natural subjects than in a new and
natural treatment of any subject. It is the manner
of seeing and painting it, not the name of the thing
painted, that gives the quality of grandeur or of
littleness and worry to a picture, and Courbet's
Stotie Breakers is more " classic" than David's
Horatii. Soon, in the course of progress, an
object was no longer expressed under all con-
ditions by that pencil-point contour which real
light disdains to preserve. Men learnt to use the:
modesty of nature and to dare to reveal things with
the mystery of a true chiaroscuro. It became
necessary to note the values of light on planes at
various angles and at different distances, and on a
variety of colours ; to observe the relative force with
which masses relieved against the general tone; to
complete the impression of a true aspect by regard-
ing colours as related to the prevailing note of the.
whole field of vision rather than to each other.
Then we have those researches into effects of focus,
and definition by which we suit nature to the con-
ditions of a framed composition, by which we
obtain an effective scale of relative importances in
colour, tone, air and detail, and so secure our
fleeting impressions of grandeur, size, space, and
mystery. Finally, handling became part of the
imagination, and was made to underline construc-
tion and express the sentiment of a broad view of