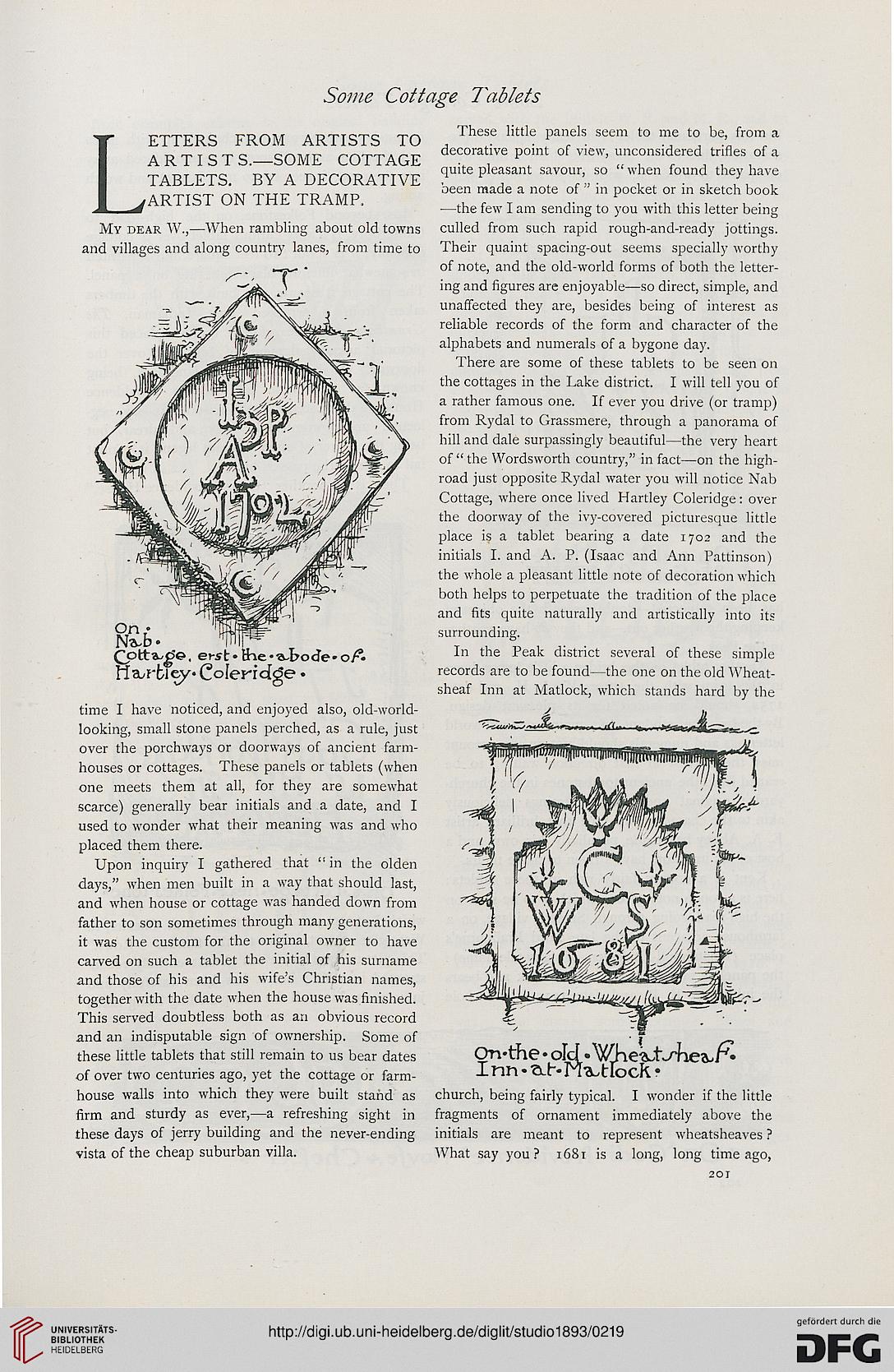 LETTERS FROM ARTISTS TO
ARTISTS.—SOME COTTAGE
TABLETS. BY A DECORATIVE
ARTIST ON THE TRAMP,

My dear W.,—When rambling about old towns
and villages and along country lanes, from time to

time I have noticed, and enjoyed also, old-world-
looking, small stone panels perched, as a rule, just
over the porchways or doorways of ancient farm-
houses or cottages. These panels or tablets (when
one meets them at all, for they are somewhat
scarce) generally bear initials and a date, and I
used to wonder what their meaning was and who
placed them there.

Upon inquiry I gathered that "in the olden
days," when men built in a way that should last,
and when house or cottage was handed down from
father to son sometimes through many generations,
it was the custom for the original owner to have
carved on such a tablet the initial of his surname
and those of his and his wife's Christian names,
together with the date when the house was finished.
This served doubtless both as an obvious record
and an indisputable sign of ownership. Some of
these little tablets that still remain to us bear dates
of over two centuries ago, yet the cottage or farm-
house walls into which they were built stand as
firm and sturdy as ever,—a refreshing sight in
these days of jerry building and the never-ending
vista of the cheap suburban villa.

These little panels seem to me to be, from a
decorative point of view, unconsidered trifles of a
quite pleasant savour, so " when found they have
been made a note of " in pocket or in sketch book
—the few I am sending to you with this letter being
culled from such rapid rough-and-ready jottings.
Their quaint spacing-out seems specially worthy
of note, and the old-world forms of both the letter-
ing and figures are enjoyable—so direct, simple, and
unaffected they are, besides being of interest as
reliable records of the form and character of the
alphabets and numerals of a bygone day.

There are some of these tablets to be seen on
the cottages in the Lake district. I will tell you of
a rather famous one. If ever you drive (or tramp)
from Rydal to Grassmere, through a panorama of
hill and dale surpassingly beautiful—the very heart
of " the Wordsworth country," in fact—on the high-
road just opposite Rydal water you will notice Nab
Cottage, where once lived Hartley Coleridge: over
the doorway of the ivy-covered picturesque little
place is a tablet bearing a date 1702 and the
initials I. and A. P. (Isaac and Ann Pattinson)
the whole a pleasant little note of decoration which
both helps to perpetuate the tradition of the place
and fits quite naturally and artistically into its
surrounding.

In the Peak district several of these simple
records are to be found—the one on the old Wheat-
sheaf Inn at Matlock, which stands hard by the

church, being fairly typical. I wonder if the little
fragments of ornament immediately above the
initials are meant to represent wheatsheaves ?
What say you? 1681 is a long, long time ago,