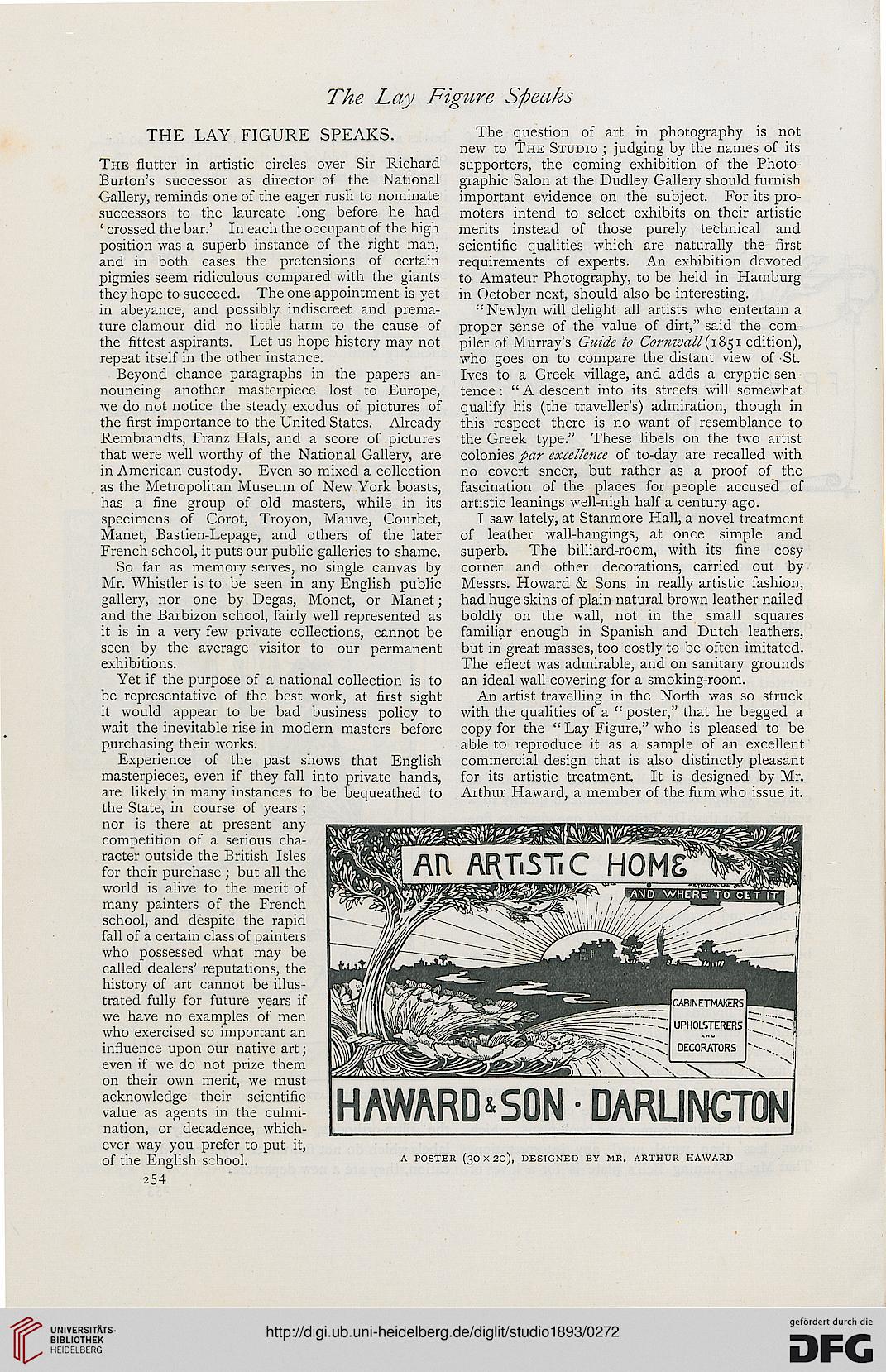 THE LAY FIGURE SPEAKS. The question of art in photography is not

new to The Studio ; judging by the names of its
The flutter in artistic circles over Sir Richard supporters, the coming exhibition of the Photo-
Burton's successor as director of the National graphic Salon at the Dudley Gallery should furnish
Gallery, reminds one of the eager rush to nominate important evidence on the subject. For its pro-
successors to the laureate long before he had moters intend to select exhibits on their artistic
' crossed the bar.' In each the occupant of the high merits instead of those purely technical and
position was a superb instance of the right man, scientific qualities which are naturally the first
and in both cases the pretensions of certain requirements of experts. An exhibition devoted
pigmies seem ridiculous compared with the giants to Amateur Photography, to be held in Hamburg
they hope to succeed. The one appointment is yet in October next, should also be interesting,
in abeyance, and possibly indiscreet and prema- " Newlyn will delight all artists who entertain a
ture clamour did no little harm to the cause of proper sense of the value of dirt," said the com-
the fittest aspirants. Let us hope history may not piler of Murray's Guide to Cornwall'(1.8-51 edition),
repeat itself in the other instance. who goes on to compare the distant view of St.

Beyond chance paragraphs in the papers an- Ives to a Greek village, and adds a cryptic sen-

nouncing another masterpiece lost to Europe, tence: " A descent into its streets will somewhat

we do not notice the steady exodus of pictures of qualify his (the traveller's) admiration, though in

the first importance to the United States. Already this respect there is no want of resemblance to

Rembrandts, Franz Hals, and a score of pictures the Greek type." These libels on the two artist

that were well worthy of the National Gallery, are colonies par excellence of to-day are recalled with

in American custody. Even so mixed a collection no covert sneer, but rather as a proof of the

as the Metropolitan Museum of New York boasts, fascination of the places for people accused of

has a fine group of old masters, while in its artistic leanings well-nigh half a century ago.

Manet, Bastien-Lepage, and others of the later of leather wall-hangings, at once simple and

French school, it puts our public galleries to shame, superb. The billiard-room, with its fine cosy

So far as memory serves, no single canvas by corner and other decorations, carried out by

Mr. Whistler is to be seen in any English public Messrs. Howard & Sons in really artistic fashion,

gallery, nor one by Degas, Monet, or Manet; had huge skins of plain natural brown leather nailed

and the Barbizon school, fairly well represented as boldly on the wall, not in the small squares

it is in a very few private collections, cannot be familiar enough in Spanish and Dutch leathers,

seen by the average visitor to our permanent but in great masses, too costly to be often imitated,

exhibitions. The efiect was admirable, and on sanitary grounds

Yet if the purpose of a national collection is to an ideal wall-covering for a smoking-room,

be representative of the best work, at first sight An artist travelling in the North was so struck

it would appear to be bad business policy to with the qualities of a " poster," that he begged a

wait the inevitable rise in modern masters before copy for the " Lay Figure," who is pleased to be

purchasing their works. able to reproduce it as a sample of an excellent

masterpieces, even if they fall into private hands, for its artistic treatment. It is designed by Mr.

are likely in many instances to be bequeathed to Arthur Haward, a member of the firm who issue it.
the State, in course of years ;
nor is there at present any
competition of a serious cha-
racter outside the British Isles
for their purchase ; but all the
world is alive to the merit of
many painters of the French
school, and despite the rapid
fall of a certain class of painters
who possessed what may be
called dealers' reputations, the
history of art cannot be illus-
trated fully for future years if
we have no examples of men
who exercised so important an
influence upon our native art;
even if we do not prize them
on their own merit, we must
acknowledge their scientific
value as agents in the culmi-
nation, or decadence, which-
ever way you prefer to put it,