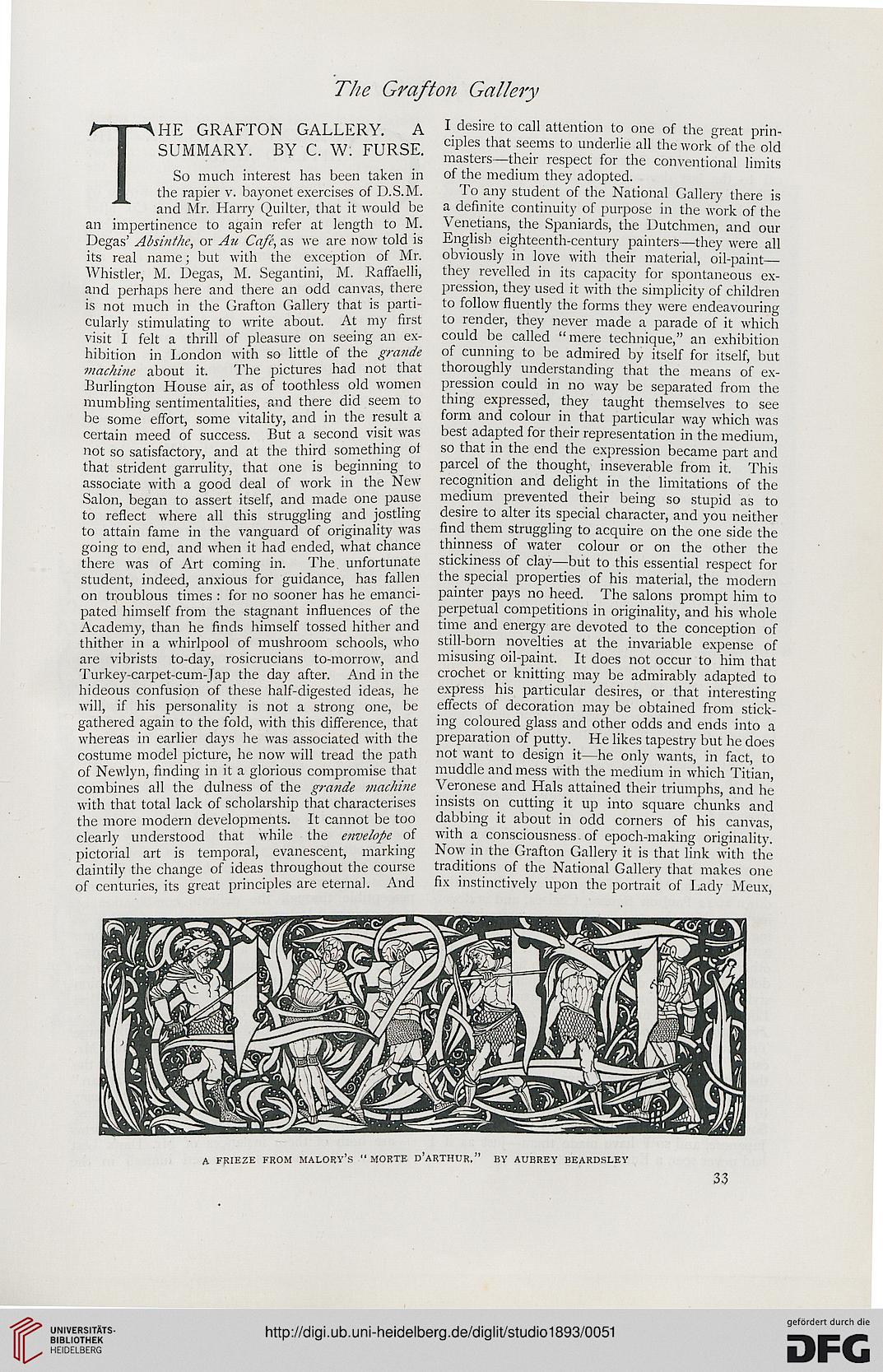 THE GRAFTON GALLERY. A I. desire to call attention to one of the great prin-
qi i mm adv rv r W fttt? =1f Clples that secms to ""derlie all the work of the old
SUMMARY, m w- 1 UK3|" masters—their respect for the conventional limits
So much interest has been taken in of the medium they adopted,
the rapier v. bayonet exercises of D.S.M. To any student of the National Gallery there is
and Mr. Harry Quilter, that it would be a definite continuity of purpose in the work of the
an impertinence to again refer at length to M. Venetians, the Spaniards, the Dutchmen, and our
Degas' Absinthe, or Au Cafi, as we are now told is English eighteenth-century painters—they were all
its real name; but with the exception of Mr. obviously in love with their material, oil-paint—
Whistler, M. Degas, M. Segantini, M. Raffaelli, they revelled in its capacity for spontaneous ex-
and perhaps here and there an odd canvas, there pression, they used it with the simplicity of children
is not much in the Grafton Gallery that is parti- to follow fluently the forms they were endeavouring
cularly stimulating to write about. At my first to render, they never made a parade of it which
visit I felt a thrill of pleasure on seeing an ex- could be called "mere technique," an exhibition
hibition in London with so little of the grande of cunning to be admired by itself for itself, but
machine about it. The pictures had not that thoroughly understanding that the means of ex-
Hurlington House air, as of toothless old women pression could in no way be separated from the
mumbling sentimentalities, and there did seem to thing expressed, they taught themselves to see
be some effort, some vitality, and in the result a form and colour in that particular way which was
certain meed of success. But a second visit was best adapted for their representation in the medium,
not so satisfactory, and at the third something ol so that in the end the expression became part and
that strident garrulity, that one is beginning to parcel of the thought, inseverable from it. This
associate with a good deal of work in the New recognition and delight in the limitations of the
Salon, began to assert itself, and made one pause medium prevented their being so stupid as to
to reflect where all this struggling and jostling desire to alter its special character, and you neither
to attain fame in the vanguard of originality was find them struggling to acquire on the one side the
going to end, and when it had ended, what chance thinness of water colour or on the other the
there was of Art coming in. The unfortunate stickiness of clay—but to this essential respect for
student, indeed, anxious for guidance, has fallen the special properties of his material, the modern
on troublous times : for no sooner has he emanci- painter pays no heed. The salons prompt him to
pated himself from the stagnant influences of the perpetual competitions in originality, and his whole
Academy, than he finds himself tossed hither and time and energy are devoted to the conception of
thither in a whirlpool of mushroom schools, who still-born novelties at the invariable expense of
are vibrists to-day, rosicrucians to-morrow, and misusing oil-paint. It does not occur to him that
Turkey-carpet-cum-Jap the day after. And in the crochet or knitting may be admirably adapted to
hideous confusion of these half-digested ideas, he express his particular desires, or that interesting
will, if his personality is not a strong one, be effects of decoration may be obtained from stick-
gathered again to the fold, with this difference, that ing coloured glass and other odds and ends into a
whereas in earlier days he was associated with the preparation of putty. He likes tapestry but he does
costume model picture, he now will tread the path not want to design it—he only wants, in fact, to
of Newlyn, finding in it a glorious compromise that muddle and mess with the medium in which Titian,
combines all the dulness of the grande machine Veronese and Hals attained their triumphs, and he
with that total lack of scholarship that characterises insists on cutting it up into square chunks and
the more modern developments. It cannot be too dabbing it about in odd corners of his canvas,
clearly understood that while the envelope of with a consciousness of epoch-making originality,
pictorial art is temporal, evanescent, marking Now in the Grafton Gallery it is that link with the
daintily the change of ideas throughout the course traditions of the National Gallery that makes one
of centuries, its great principles are eternal. And fix instinctively upon the portrait of Lady Meux,

A FRIEZE FROM MALORV's " MORTE D ARTHUR. BY AUBREY BEARDSLEY