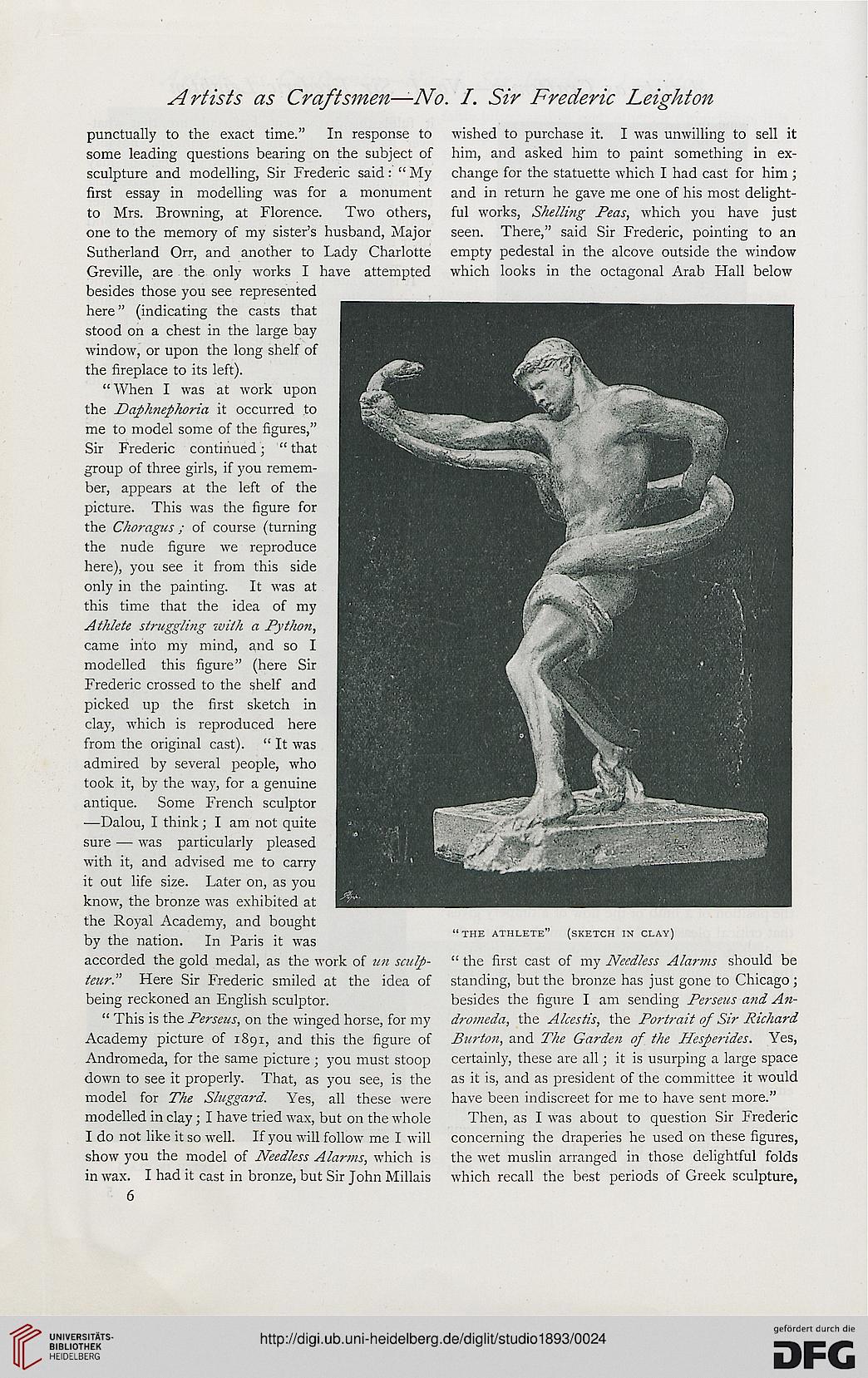 punctually to the exact time." In response to wished to purchase it. I was unwilling to sell it
some leading questions bearing on the subject of him, and asked him to paint something in ex-
sculpture and modelling, Sir Frederic said: " My change for the statuette which I had cast for him ;
first essay in modelling was for a monument and in return he gave me one of his most delight-
to Mrs. Browning, at Florence. Two others, ful works, Shelling Peas, which you have just
one to the memory of my sister's husband, Major seen. There," said Sir Frederic, pointing to an
Sutherland Orr, and another to Lady Charlotte empty pedestal in the alcove outside the window
Greville, are the only works I have attempted which looks in the octagonal Arab Hall below
besides those you see represented
here" (indicating the casts that
stood on a chest in the large bay
window, or upon the long shelf of
the fireplace to its left).

"When I was at work upon
the Daphnephoria it occurred to
me to model some of the figures,"
Sir Frederic continued; " that
group of three girls, if you remem-
ber, appears at the left of the
picture. This was the figure for
the Choragus ; of course (turning
the nude figure we reproduce
here), you see it from this side
only in the painting. It was at
this time that the idea of my
Athlete struggling with a Python,
came into my mind, and so I
modelled this figure" (here Sir
Frederic crossed to the shelf and
picked up the first sketch in
clay, which is reproduced here
from the original cast). " It was
admired by several people, who
took it, by the way, for a genuine
antique. Some French sculptor
—Dalou, I think; I am not quite
sure — was particularly pleased
with it, and advised me to carry
it out life size. Later on, as you
know, the bronze was exhibited at
the Royal Academy, and bought

by the nation. In Pans it was

accorded the gold medal, as the work of un sculp- " the first cast of my Needless Alarms should be

teur." Here Sir Frederic smiled at the idea of standing, but the bronze has just gone to Chicago ;

being reckoned an English sculptor. besides the figure I am sending Perseus and An-

" This is the Perseus, on the winged horse, for my dromeda, the Alcestis, the Portrait of Sir Richard

Academy picture of 1891, and this the figure of Barton, and The Garden of the Hesperides. Yes,

Andromeda, for the same picture ; you must stoop certainly, these are all; it is usurping a large space

down to see it properly. That, as you see, is the as it is, and as president of the committee it would

model for The Sluggard. Yes, all these were have been indiscreet for me to have sent more."
modelled in clay ; I have tried wax, but on the whole Then, as I was about to question Sir Frederic

I do not like it so well. If you will follow me I will concerning the draperies he used on these figures,

show you the model of Needless Alarms, which is the wet muslin arranged in those delightful folds

in wax. I had it cast in bronze, but Sir John Millais which recall the best periods of Greek sculpture,
6