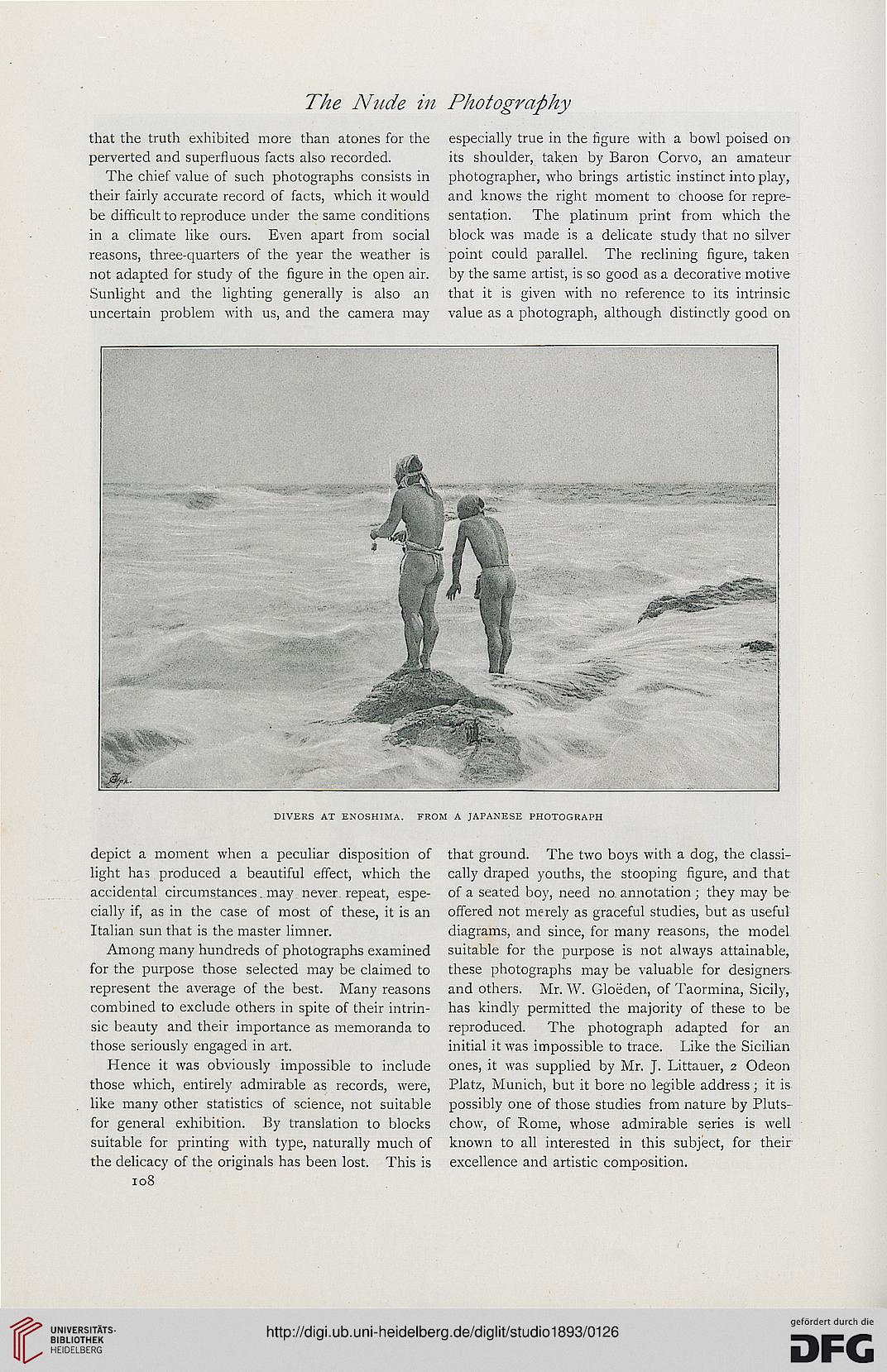 Information about OCR text
The Nude in Photography

The chief value of such photographs consists in photographer, who brings artistic instinct into play,

their fairly accurate record of facts, which it would and knows the right moment to choose for repre-

be difficult to reproduce under the same conditions sentation. The platinum print from which the

in a climate like ours. Even apart from social block was made is a delicate study that no silver

reasons, three-quarters of the year the weather is point could parallel. The reclining figure, taken

not adapted for study of the figure in the open air. by the same artist, is so good as a decorative motive

uncertain problem with us, and the camera may value as a photograph, although distinctly good on

DIVERS AT ENOSHIMA. FROM A JAPANESE PHOTOGRAPH

depict a moment when a peculiar disposition of that ground. The two boys with a dog, the classi-

light has produced a beautiful effect, which the cally draped youths, the stooping figure, and that

accidental circumstances. may never repeat, espe- of a seated boy, need no annotation ; they may be

daily if, as in the case of most of these, it is an offered not merely as graceful studies, but as useful

Italian sun that is the master limner. diagrams, and since, for many reasons, the model

Among many hundreds of photographs examined suitable for the purpose is not always attainable,

represent the average of the best. Many reasons and others. Mr. W. Gloeden, of Taormina, Sicily,

sic beauty and their importance as memoranda to reproduced. The photograph adapted for an

those seriously engaged in art. initial it was impossible to trace. Like the Sicilian

Hence it was obviously impossible to include ones, it was supplied by Mr. J. Littauer, 2 Odeon

those which, entirely admirable as records, were, Platz, Munich, but it bore no legible address; it is

like many other statistics of science, not suitable possibly one of those studies from nature by Pluts-

for general exhibition. By translation to blocks chow, of Rome, whose admirable series is well

suitable for printing with type, naturally much of known to all interested in this subject, for their

the delicacy of the originals has been lost. This is excellence and artistic composition.
108