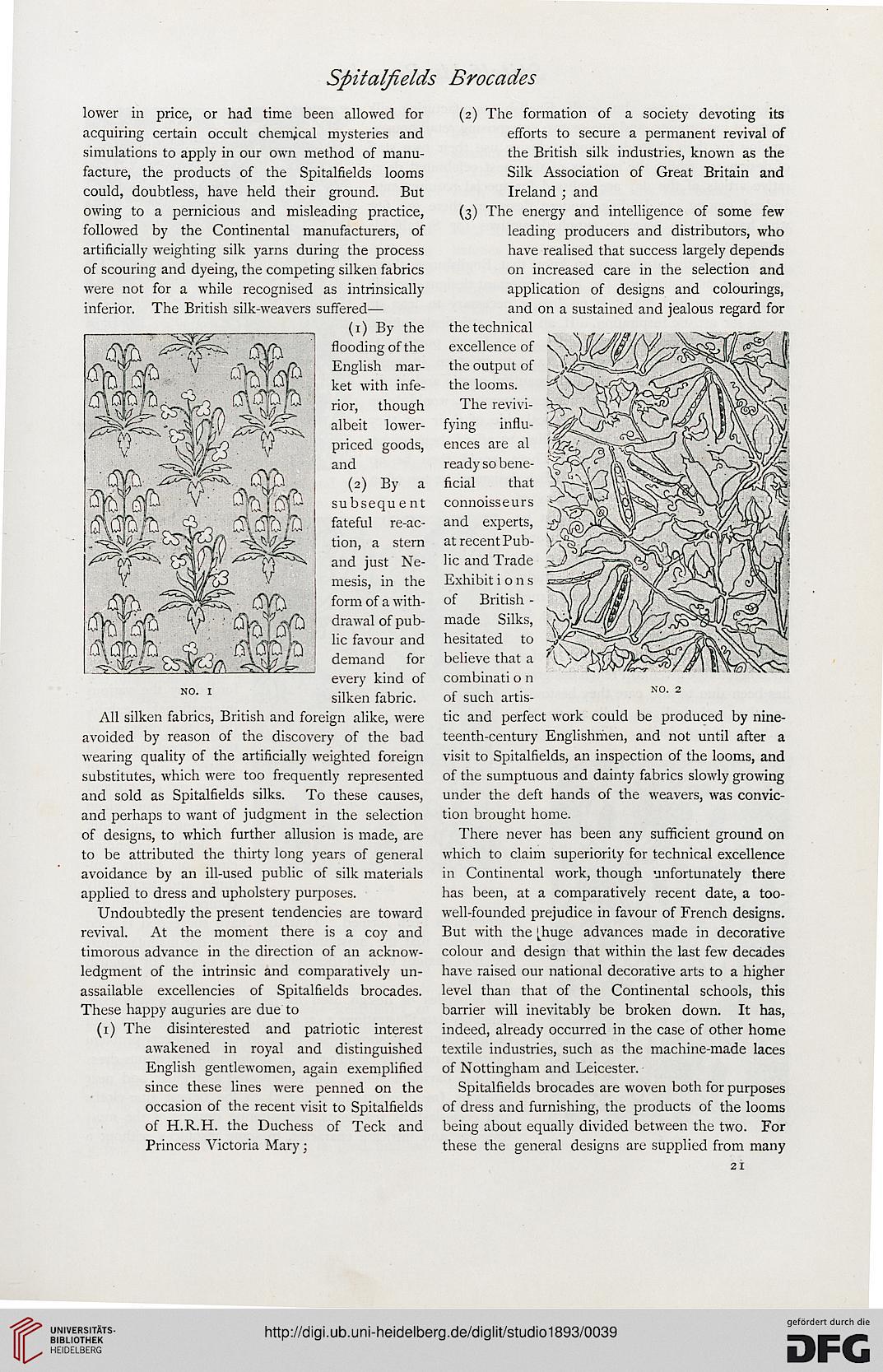 lower in price, or had time been allowed for (2) The formation of a society devoting its

simulations to apply in our own method of manu- the British silk industries, known as the

facture, the products of the Spitalfields looms Silk Association of Great Britain and

could, doubtless, have held their ground. But Ireland ; and

owing to a pernicious and misleading practice, (3) The energy and intelligence of some few

followed by the Continental manufacturers, of leading producers and distributors, who

of scouring and dyeing, the competing silken fabrics on increased care in the selection and

were not for a while recognised as intrinsically application of designs and colourings,

inferior. The British silk-weavers suffered— and on a sustained and jealous regard for

(1) By the the technical

flooding of the excellence of
English mar- the output of
ket with infe- the looms,
rior, though The revivi-
albeit lower- fying influ-
priced goods, ences are al
and ready so bene-
(2) By a ficial that
subsequent connoisseurs
fateful re-ac- and experts,
tion, a stern at recent Pub-
and just Ne- He and Trade
mesis, in the Exhibit ions
form of a with- of British -
drawal of pub- made Silks,
lie favour and hesitated to
demand for believe that a
every kind of combinati o n
r,°' 1 silken fabric. of such artis-
All silken fabrics, British and foreign alike, were tic and perfect work could be produced by nine-
avoided by reason of the discovery of the bad teenth-century Englishmen, and not until after a
wearing quality of the artificially weighted foreign visit to Spitalfields, an inspection of the looms, and
substitutes, which were too frequently represented of the sumptuous and dainty fabrics slowly growing
and sold as Spitalfields silks. To these causes, under the deft hands of the weavers, was convic-
and perhaps to want of judgment in the selection tion brought home.

of designs, to which further allusion is made, are There never has been any sufficient ground on

avoidance by an ill-used public of silk materials in Continental work, though unfortunately there

applied to dress and upholstery purposes. has been, at a comparatively recent date, a too-

Undoubtedly the present tendencies are toward well-founded prejudice in favour of French designs,

revival. At the moment there is a coy and But with the [huge advances made in decorative

assailable excellencies of Spitalfields brocades, level than that of the Continental schools, this

These happy auguries are due to barrier will inevitably be broken down. It has,

(1) The disinterested and patriotic interest indeed, already occurred in the case of other home

awakened in royal and distinguished textile industries, such as the machine-made laces

occasion of the recent visit to Spitalfields of dress and furnishing, the products of the looms

of H.R.H. the Duchess of Teck and being about equally divided between the two. For

Princess Victoria Mary; these the general designs are supplied from many