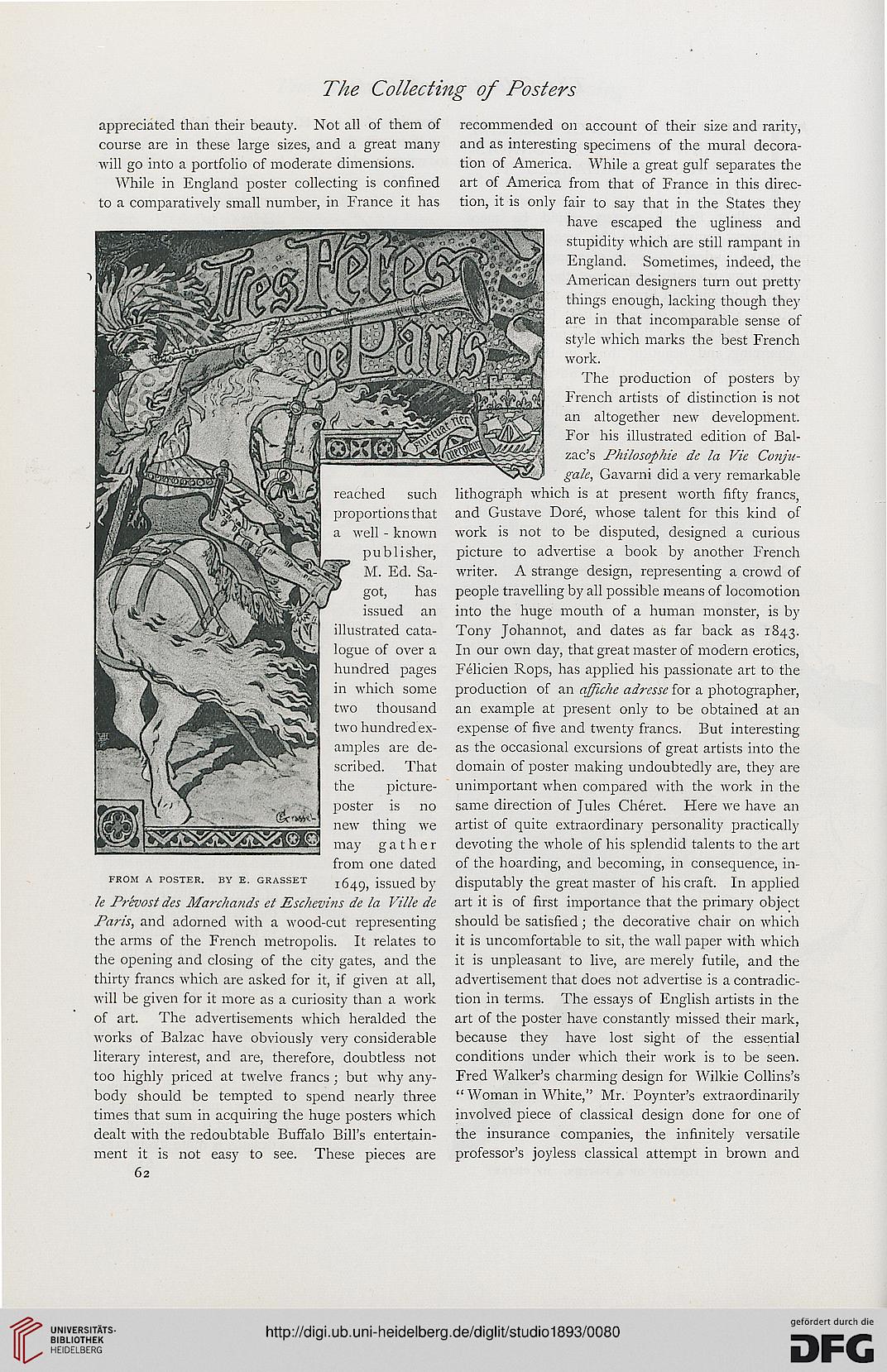 Information about OCR text
The Collecting of Posters

appreciated than their beauty. Not all of them of recommended on account of their size and rarity,
course are in these large sizes, and a great many and as interesting specimens of the mural decora-
will go into a portfolio of moderate dimensions. tion of America. While a great gulf separates the
While in England poster collecting is confined art of America from that of France in this direc-
to a comparatively small number, in France it has tion, it is only fair to say that in the States the)'

have escaped the ugliness and
stupidity which are still rampant in
England. Sometimes, indeed, the
American designers turn out pretty
things enough, lacking though they
are in that incomparable sense of
style which marks the best French
work.

The production of posters by
French artists of distinction is not
an altogether new development.
For his illustrated edition of Bal-
zac's Philosophic de la Vie Conju-
gate, Gavarni did a very remarkable
lithograph which is at present worth fifty francs,
and Gustave Dore, whose talent for this kind of
well - known work is not to be disputed, designed a curious
publisher, picture to advertise a book by another French
M. Ed. Sa- writer. A strange design, representing a crowd of
got, has people travelling by all possible means of locomotion
issued an into the huge mouth of a human monster, is by
illustrated cata- Tony Johannot, and dates as far back as 1843.
logue of over a In our own day, that great master of modern erotics,
hundred pages Felicien Rops, has applied his passionate art to the
in which some production of an affiche adressc for a photographer,
two thousand an example at present only to be obtained at an
two hundredex- expense of five and twenty francs. But interesting
amples are de- as the occasional excursions of great artists into the
scribed. That domain of poster making undoubtedly are, they are
the picture- unimportant when compared with the work in the
poster is no same direction of Jules Cheret. Here we have an
new thing we artist of quite extraordinary personality practically
may gather devoting the whole of his splendid talents to the art
from one dated of the hoarding, and becoming, in consequence, in-
from a poster, bye. grasset 1649, issued by disputably the great master of his craft. In applied
le Pr'evostdes Marchands et Eschevins de la Ville de art it is of first importance that the primary object
Paris, and adorned with a wood-cut representing should be satisfied; the decorative chair on which
the arms of the French metropolis. It relates to it is uncomfortable to sit, the wall paper with which
the opening and closing of the city gates, and the it is unpleasant to live, are merely futile, and the
thirty francs which are asked for it, if given at all, advertisement that does not advertise is a contradic-
will be given for it more as a curiosity than a work tion in terms. The essays of English artists in the
of art. The advertisements which heralded the art of the poster have constantly missed their mark,
works of Balzac have obviously very considerable because they have lost sight of the essential
literary interest, and are, therefore, doubtless not conditions under which their work is to be seen,
too highly priced at twelve francs ; but why any- Fred Walker's charming design for Wilkie Collins's
body should be tempted to spend nearly three " Woman in White," Mr. Poynter's extraordinarily
times that sum in acquiring the huge posters which involved piece of classical design done for one of
dealt with the redoubtable Buffalo Bill's entertain- the insurance companies, the infinitely versatile
ment it is not easy to see. These pieces are professor's joyless classical attempt in brown and
62