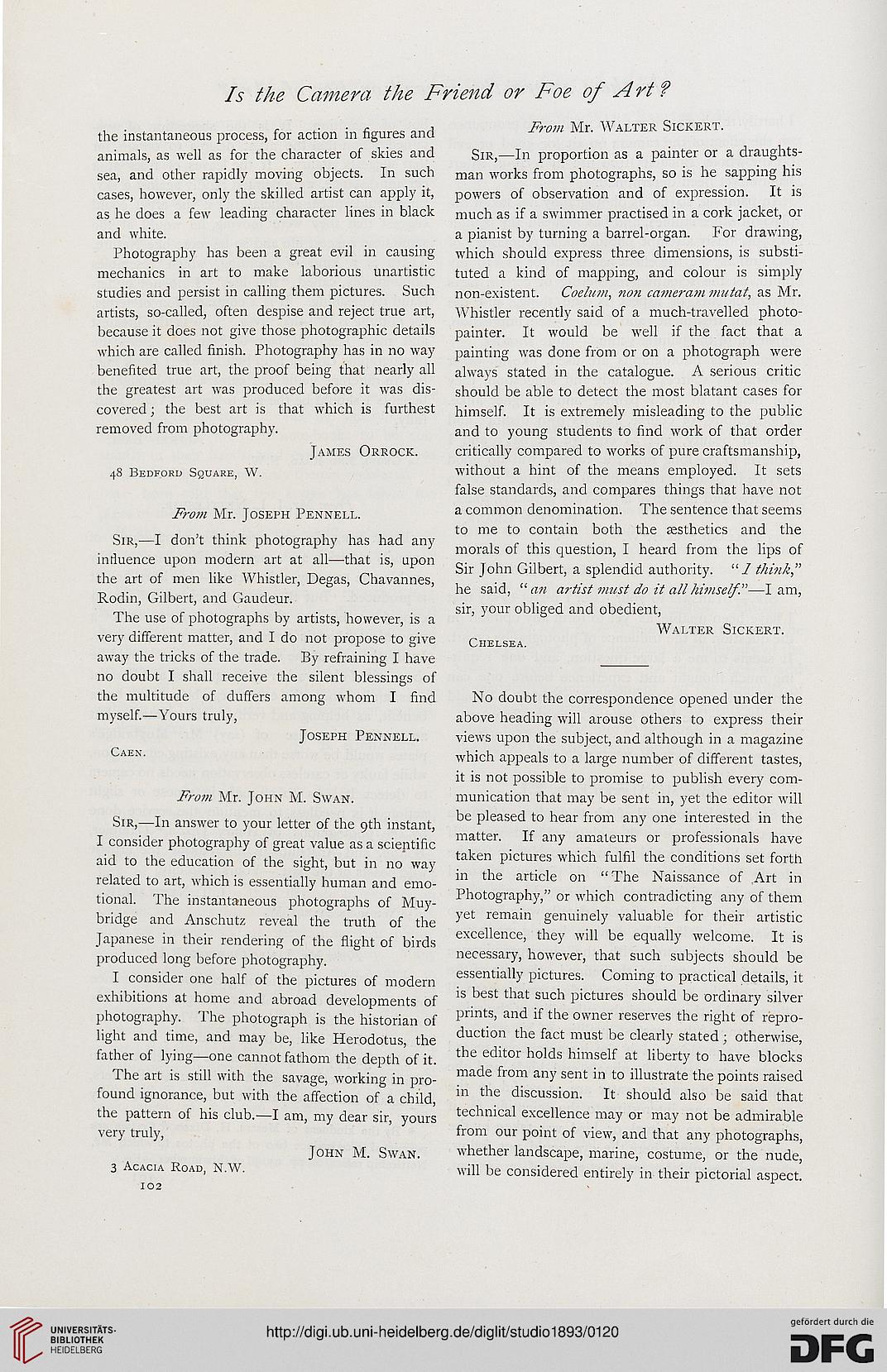 the instantaneous process, for action in figures and
animals, as well as for the character of skies and
sea, and other rapidly moving objects. In such
cases, however, only the skilled artist can apply it,
as he does a few leading character lines in black
and white.

Photography has been a great evil in causing
mechanics in art to make laborious unartistic
studies and persist in calling them pictures. Such
artists, so-called, often despise and reject true art,
because it does not give those photographic details
which are called finish. Photography has in no way
benefited true art, the proof being that nearly all
the greatest art was produced before it was dis-
covered; the best art is that which is furthest
removed from photography.

Sir,—I don't think photography has had any
inrluence upon modern art at all—that is, upon
the art of men like Whistler, Degas, Chavannes,
Rodin, Gilbert, and Gaudeur.

The use of photographs by artists, however, is a
very different matter, and I do not propose to give
away the tricks of the trade. By refraining I have
no doubt I shall receive the silent blessings of
the multitude of duffers among whom I find
myself.—Yours truly,

Sir,—In answer to your letter of the 9th instant,
I consider photography of great value as a scientific
aid to the education of the sight, but in no way
related to art, which is essentially human and emo-
tional. The instantaneous photographs of Muy-
bridge and Anschutz reveal the truth of the
Japanese in their rendering of the flight of birds
produced long before photography.

I consider one half of the pictures of modern
exhibitions at home and abroad developments of
photography. The photograph is the historian of
light and time, and may be, like Herodotus, the
father of lying—one cannot fathom the depth of it.

The art is still with the savage, working in pro-
found ignorance, but with the affection of a child,
the pattern of his club.—I am, my dear sir, yours
very truly,

From Mr. Walter Sickert.
Sir,—In proportion as a painter or a draughts-
man works from photographs, so is he sapping his
powers of observation and of expression. It is
much as if a swimmer practised in a cork jacket, or
a pianist by turning a barrel-organ. For drawing,
which should express three dimensions, is substi-
tuted a kind of mapping, and colour is simply
non-existent. Coelum, non cameram mutat, as Mr.
Whistler recently said of a much-travelled photo-
painter. It would be well if the fact that a
painting was done from or on a photograph were
always stated in the catalogue. A serious critic
should be able to detect the most blatant cases for
himself. It is extremely misleading to the public
and to young students to find work of that order
critically compared to works of pure craftsmanship,
without a hint of the means employed. It sets
false standards, and compares things that have not
a common denomination. The sentence that seems
to me to contain both the Esthetics and the
morals of this question, I heard from the lips of
Sir John Gilbert, a splendid authority. " / think,"
he said, "an artist must do it all himself—lam,
sir, your obliged and obedient,

No doubt the correspondence opened under the
above heading will arouse others to express their
views upon the subject, and although in a magazine
which appeals to a large number of different tastes,
it is not possible to promise to publish every com-
munication that may be sent in, yet the editor will
be pleased to hear from any one interested in the
matter. If any amateurs or professionals have
taken pictures which fulfil the conditions set forth
in the article on " The Naissance of Art in
Photography," or which contradicting any of them
yet remain genuinely valuable for their artistic
excellence, they will be equally welcome. It is
necessary, however, that such subjects should be
essentially pictures. Coming to practical details, it
is best that such pictures should be ordinary silver
prints, and if the owner reserves the right of repro-
duction the fact must be clearly stated; otherwise,
the editor holds himself at liberty to have blocks
made from any sent in to illustrate the points raised
in the discussion. It should also be said that
technical excellence may or may not be admirable
from our point of view, and that any photographs,
whether landscape, marine, costume, or the nude,
will be considered entirely in their pictorial aspect.