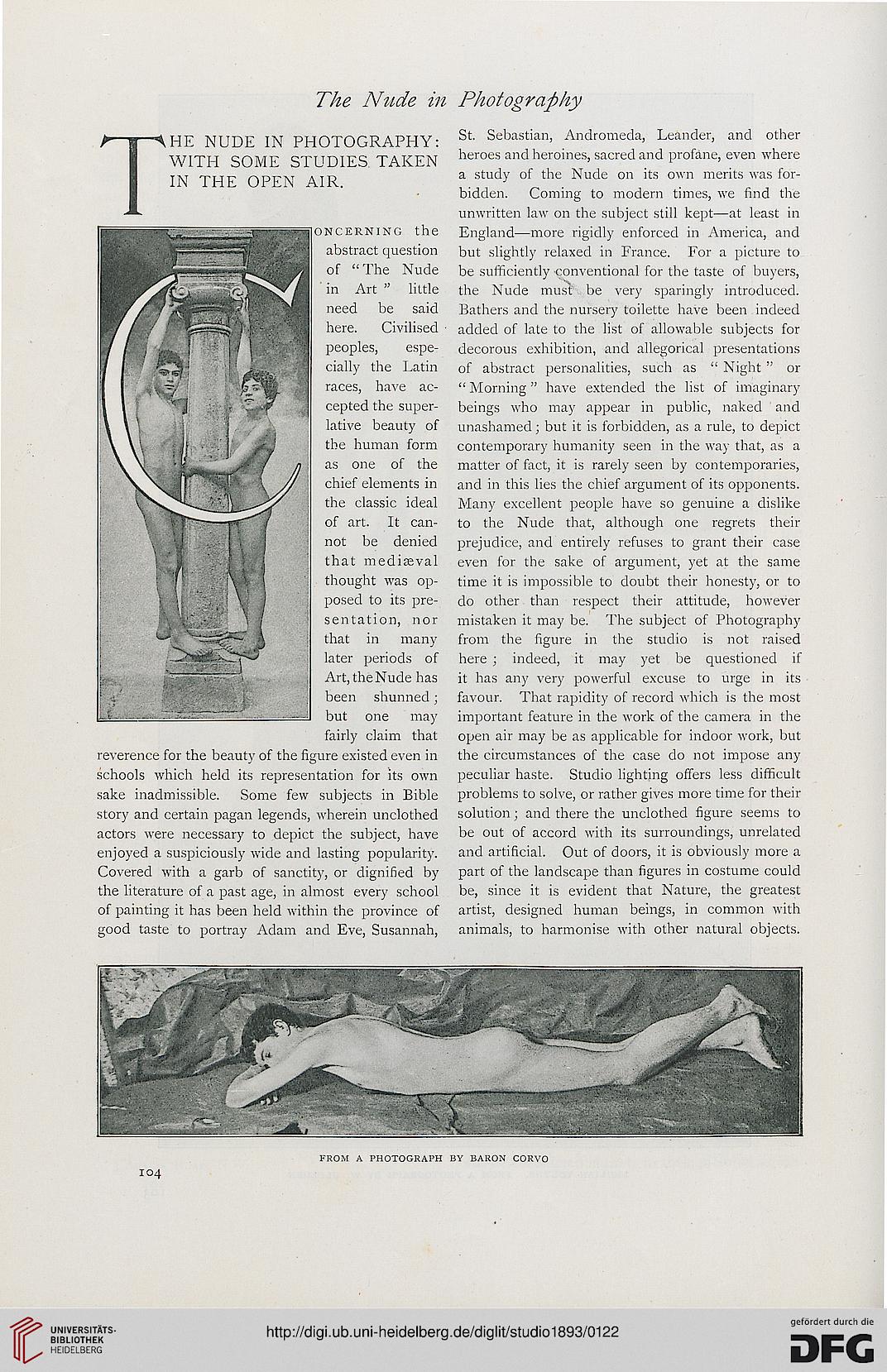 Information about OCR text
The Nude in Photography

THE NUDE IN PHOTOGRAPHY: St Sebastian> Andromeda, Leander, and other

WITH SOME STUDIES TAKEN heroes and heroines, sacred and profane, even where

IN THE OPEN AIR a stuc^' °^ l'le Nude on its own merits was for-
bidden. Coming to modern times, we find the
unwritten law on the subject still kept—at least in

abstract question but slightly relaxed in France. For a picture to

of "The Nude be sufficiently conventional for the taste of buyers,

in Art " little the Nude must be very sparingly introduced,

need be said Bathers and the nursery toilette have been indeed

here. Civilised ■ added of late to the list of allowable subjects for

cially the Latin of abstract personalities, such as " Night " or

races, have ac- " Morning" have extended the list of imaginary

cepted the super- beings who may appear in public, naked ' and

lative beauty of unashamed ; but it is forbidden, as a rule, to depict

the human form contemporary humanity seen in the way that, as a

as one of the matter of fact, it is rarely seen by contemporaries,

chief elements in and in this lies the chief argument of its opponents,

the classic ideal Many excellent people have so genuine a dislike

of art. It can- to the Nude that, although one regrets their

not be denied prejudice, and entirely refuses to grant their case

that mediaeval even for the sake of argument, yet at the same

thought was op- time it is impossible to doubt their honesty, or to

posed to its pre- do other than respect their attitude, however

sentation, nor mistaken it may be. The subject of Photography

later periods of here ; indeed, it may yet be questioned if

Art, the Nude has it has any very powerful excuse to urge in its

been shunned ; favour. That rapidity of record which is the most

fairly claim that open air may be as applicable for indoor work, but

schools which held its representation for its own peculiar haste. Studio lighting offers less difficult

sake inadmissible. Some few subjects in Bible problems to solve, or rather gives more time for their

story and certain pagan legends, wherein unclothed solution ; and there the unclothed figure seems to

actors were necessary to depict the subject, have be out of accord with its surroundings, unrelated

enjoyed a suspiciously wide and lasting popularity. and artificial. Out of doors, it is obviously more a

Covered with a garb of sanctity, or dignified by part of the landscape than figures in costume could

the literature of a past age, in almost every school be, since it is evident that Nature, the greatest

of painting it has been held within the province of artist, designed human beings, in common with

good taste to portray Adam and Eve, Susannah, animals, to harmonise with other natural objects.

FROM A PHOTOGRAPH BY BARON CORVO