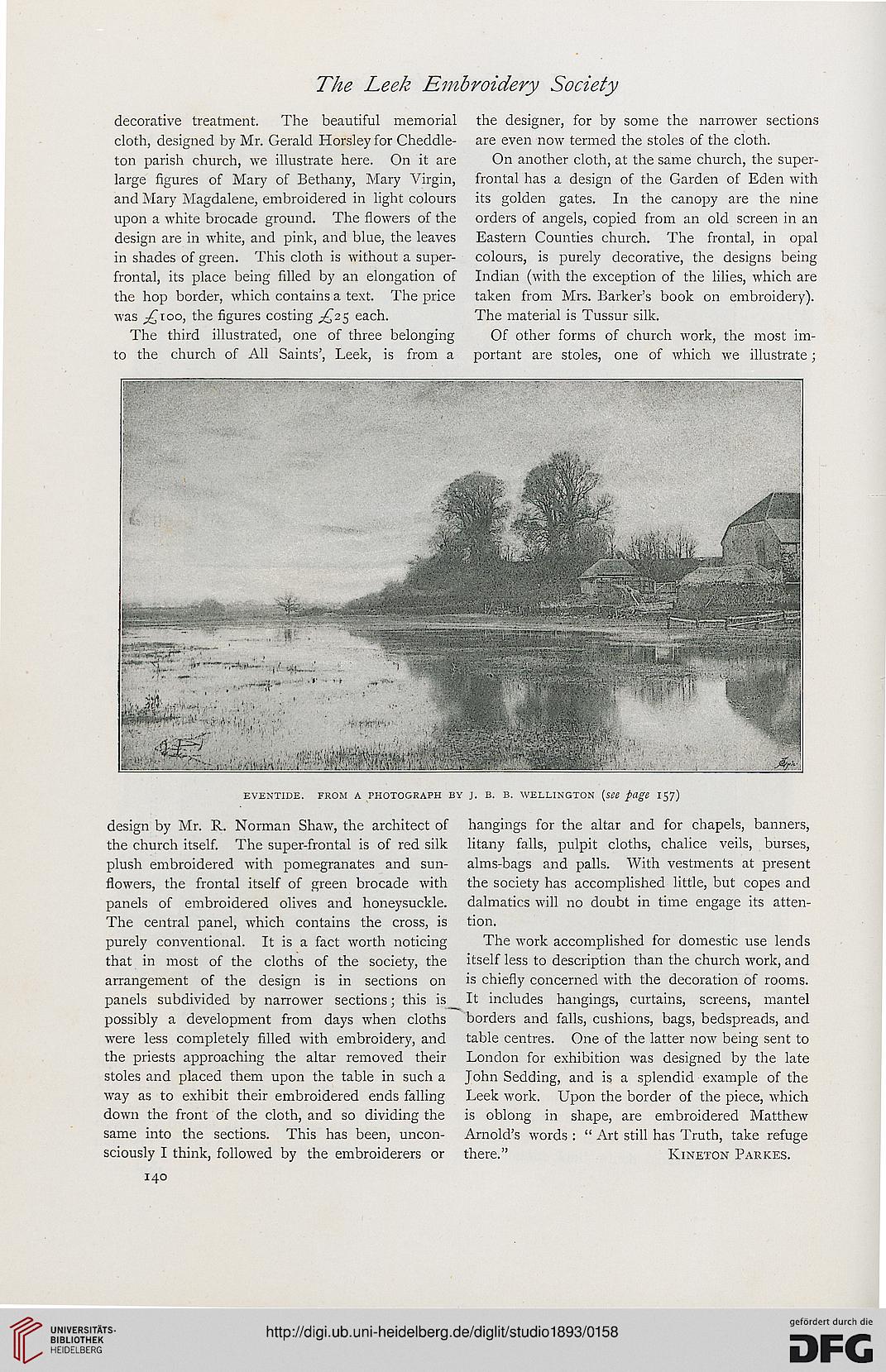 decorative treatment. The beautiful memorial the designer, for by some the narrower sections
cloth, designed by Mr. Gerald Horsley for Cheddle- are even now termed the stoles of the cloth,
ton parish church, we illustrate here. On it are On another cloth, at the same church, the super-
large figures of Mary of Bethany, Mary Virgin, frontal has a design of the Garden of Eden with
and Mary Magdalene, embroidered in light colours its golden gates. In the canopy are the nine
upon a white brocade ground. The flowers of the orders of angels, copied from an old screen in an
design are in white, and pink, and blue, the leaves Eastern Counties church. The frontal, in opal
in shades of green. This cloth is without a super- colours, is purely decorative, the designs being
frontal, its place being filled by an elongation of Indian (with the exception of the lilies, which are
the hop border, which contains a text. The price taken from Mrs. Barker's book on embroidery),
was ;£ioo, the figures costing ^25 each. The material is Tussur silk.

The third illustrated, one of three belonging Of other forms of church work, the most im-

to the church of All Saints', Leek, is from a portant are stoles, one of which we illustrate;

design by Mr. R. Norman Shaw, the architect of hangings for the altar and for chapels, banners,

the church itself. The super-frontal is of red silk litany falls, pulpit cloths, chalice veils, burses,

plush embroidered with pomegranates and sun- alms-bags and palls. With vestments at present

flowers, the frontal itself of green brocade with the society has accomplished little, but copes and

panels of embroidered olives and honeysuckle, dalmatics will no doubt in time engage its atten-

The central panel, which contains the cross, is tion.

purely conventional. It is a fact worth noticing The work accomplished for domestic use lends

that in most of the cloths of the society, the itself less to description than the church work, and

arrangement of the design is in sections on is chiefly concerned with the decoration of rooms,

panels subdivided by narrower sections; this is It includes hangings, curtains, screens, mantel

possibly a development from days when cloths borders and falls, cushions, bags, bedspreads, and

were less completely filled with embroidery, and table centres. One of the latter now being sent to

stoles and placed them upon the table in such a John Sedding, and is a splendid example of the

way as to exhibit their embroidered ends falling Leek work. Upon the border of the piece, which

down the front of the cloth, and so dividing the is oblong in shape, are embroidered Matthew

same into the sections. This has been, uncon- Arnold's words : " Art still has Truth, take refuge

sciously I think, followed by the embroiderers or there." Kineton Parkes.
140