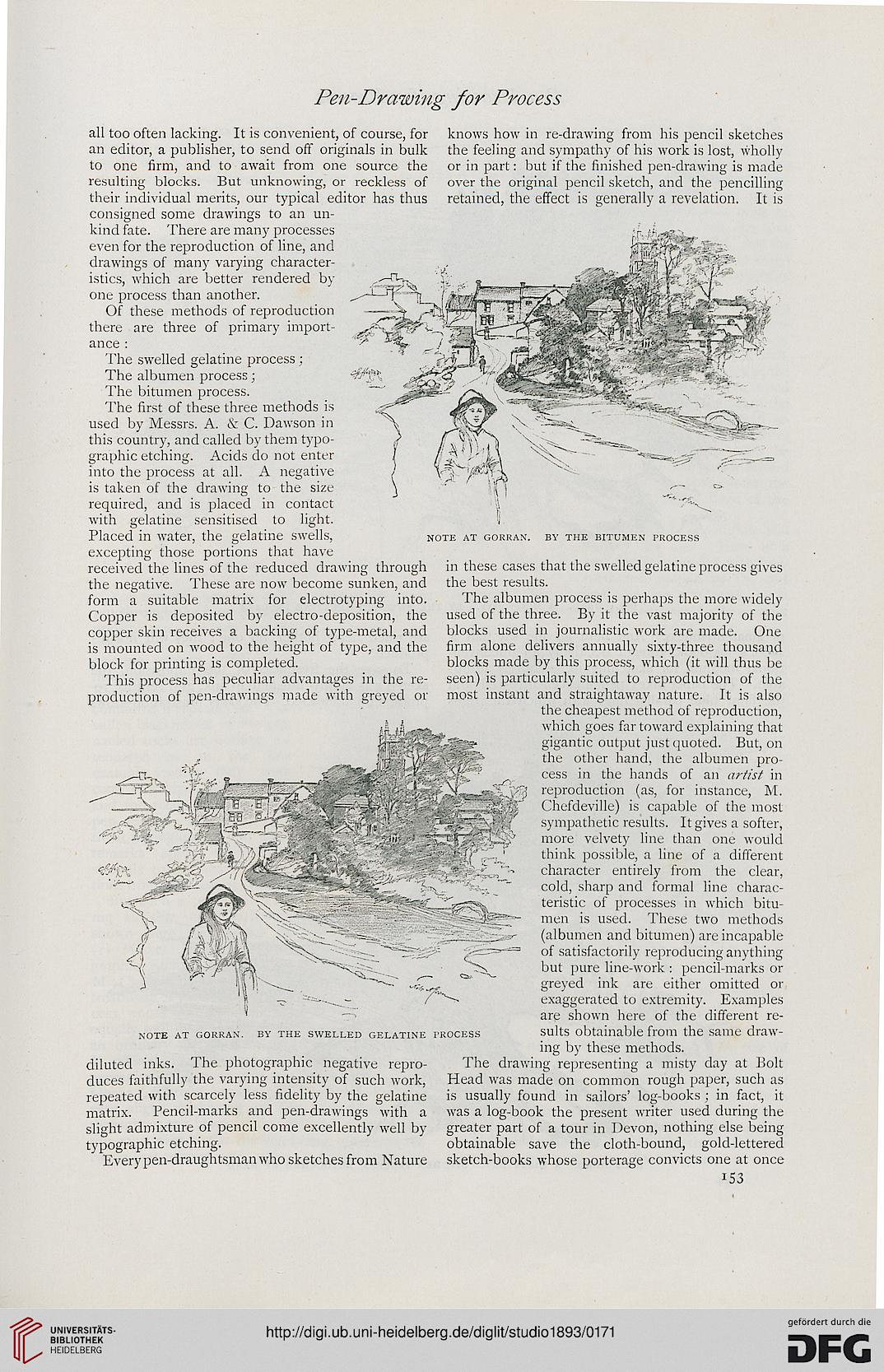 all too often lacking. It is convenient, of course, for knows how in re-drawing from his pencil sketches
an editor, a publisher, to send off originals in bulk the feeling and sympathy of his work is lost, wholly
to one firm, and to await from one source the or in part: but if the finished pen-drawing is made
resulting blocks. But unknowing, or reckless of over the original pencil sketch, and the pencilling
their individual merits, our typical editor has thus retained, the effect is generally a revelation. It is
consigned some drawings to an un-
kind fate. There are many processes -r. fA^a ;■.
even for the reproduction of line, and '&$h***tk-
drawings of many varying character-
istics, which are better rendered by
one process than another.

Of these methods of reproduction
there are three of primary import-
ance :

The first of these three methods is
used by Messrs. A. & C. Dawson in
this country, and called by them typo-
graphic etching. Acids do not enter
into the process at all. A negative
is taken of the drawing to the size
required, and is placed in contact
with gelatine sensitised to light.
Placed in water, the gelatine swells, note at gorran. by the bitumen process

excepting those portions that have

received the lines of the reduced drawing through in these cases that the swelled gelatine process gives
the negative. These are now become sunken, and the best results.

form a suitable matrix for electrotyping into. The albumen process is perhaps the more widely
Copper is deposited by electro-deposition, the used of the three. By it the vast majority of the
copper skin receives a backing of type-metal, and blocks used in journalistic work are made. One
is mounted on wood to the height of type, and the firm alone delivers annually sixty-three thousand
block for printing is completed. blocks made by this process, which (it will thus be

This process has peculiar advantages in the re- seen) is particularly suited to reproduction of the
production of pen-drawings made with greyed or most instant and straightaway nature. It is also

the cheapest method of reproduction,
which goes far toward explaining that
gigantic output just quoted. But, on
the other hand, the albumen pro-
cess in the hands of an artist in
reproduction (as, for instance, M.
Chefdeville) is capable of the most
sympathetic results. It gives a softer,
more velvety line than one would
think possible, a line of a different
character entirely from the clear,
cold, sharp and formal line charac-
teristic of processes in which bitu-
men is used. These two methods
(albumen and bitumen) are incapable
of satisfactorily reproducing anything
but pure line-work : pencil-marks or
greyed ink are either omitted or
exaggerated to extremity. Examples
are shown here of the different re-
note at gorran. by the swelled gelatine i'rocess suits obtainable from the same draw-

ing by these methods.

diluted inks. The photographic negative repro- The drawing representing a misty day at Bolt
duces faithfully the varying intensity of such work, Head was made on common rough paper, such as
repeated with scarcely less fidelity by the gelatine is usually found in sailors' log-books ; in fact, it
matrix. Pencil-marks and pen-drawings with a was a log-book the present writer used during the
slight admixture of pencil come excellently well by greater part of a tour in Devon, nothing else being
typographic etching. obtainable save the cloth-bound, gold-lettered