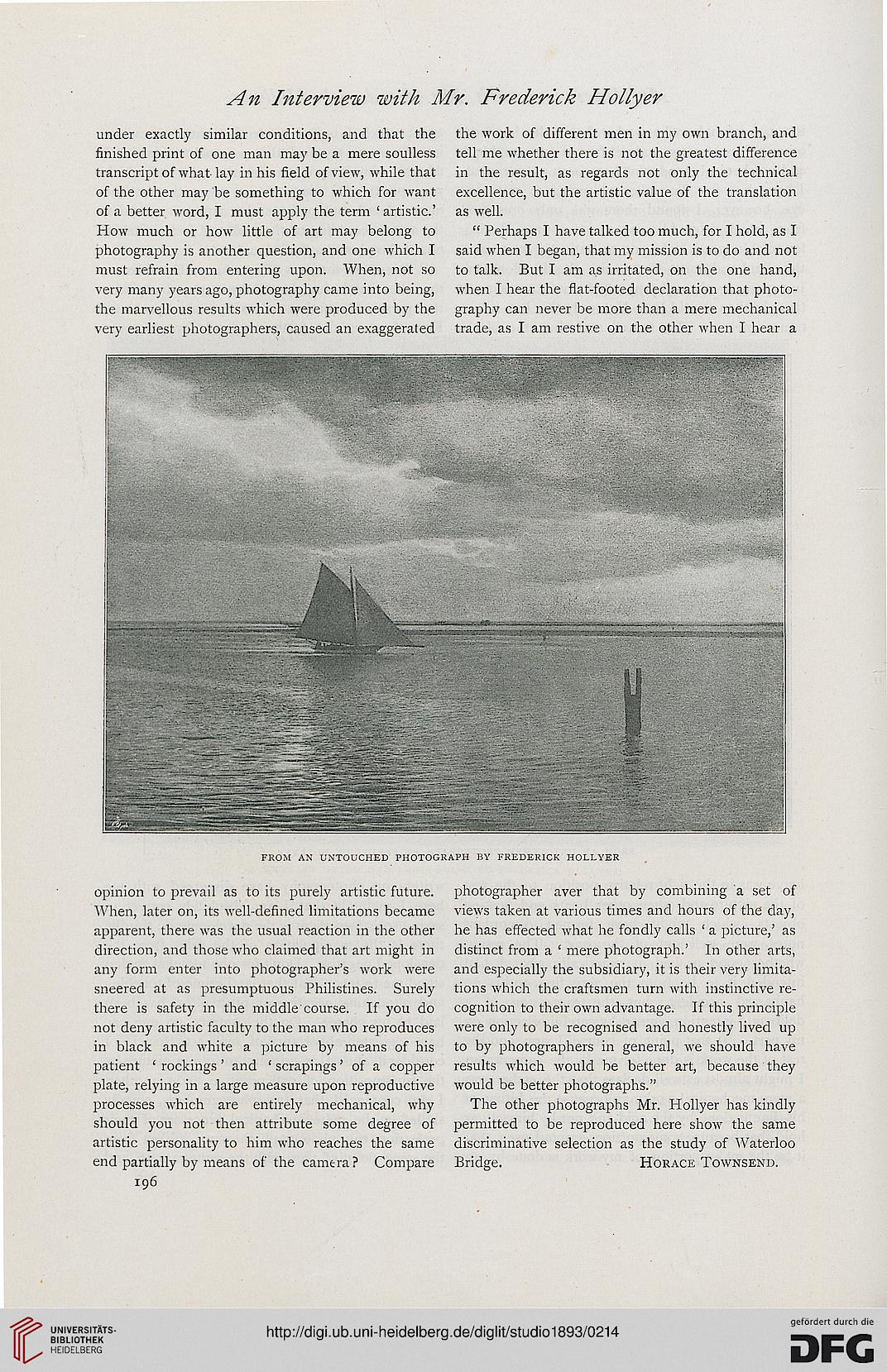 under exactly similar conditions, and that the
finished print of one man may be a mere soulless
transcript of what lay in his field of view, while that
of the other may be something to which for want
of a better word, I must apply the term ' artistic'
How much or how little of art may belong to
photography is another question, and one which I
must refrain from entering upon. When, not so
very many years ago, photography came into being,
the marvellous results which were produced by the
very earliest photographers, caused an exaggerated

opinion to prevail as to its purely artistic future.
When, later on, its well-defined limitations became
apparent, there was the usual reaction in the other
direction, and those who claimed that art might in
any form enter into photographer's work were
sneered at as presumptuous Philistines. Surely
there is safety in the middle course. If you do
not deny artistic faculty to the man who reproduces
in black and white a picture by means of his
patient ' rockings ' and ' scrapings ' of a copper
plate, relying in a large measure upon reproductive
processes which are entirely mechanical, why
should you not then attribute some degree of
artistic personality to him who reaches the same
end partially by means of the camera? Compare
196

the work of different men in my own branch, and
tell me whether there is not the greatest difference
in the result, as regards not only the technical
excellence, but the artistic value of the translation
as well.

" Perhaps I have talked too much, for I hold, as I
said when I began, that my mission is to do and not
to talk. But I am as irritated, on the one hand,
when I hear the flat-footed declaration that photo-
graphy can never be more than a mere mechanical
trade, as I am restive on the other when I hear a

photographer aver that by combining a set of
views taken at various times and hours of the day,
he has effected what he fondly calls ' a picture,' as
distinct from a 1 mere photograph.' In other arts,
and especially the subsidiary, it is their very limita-
tions which the craftsmen turn with instinctive re-
cognition to their own advantage. If this principle
were only to be recognised and honestly lived up
to by photographers in general, we should have
results which would be better art, because they
would be better photographs."

The other photographs Mr. Hollyer has kindly
permitted to be reproduced here show the same
discriminative selection as the study of Waterloo
Bridge. Horace Townsend.