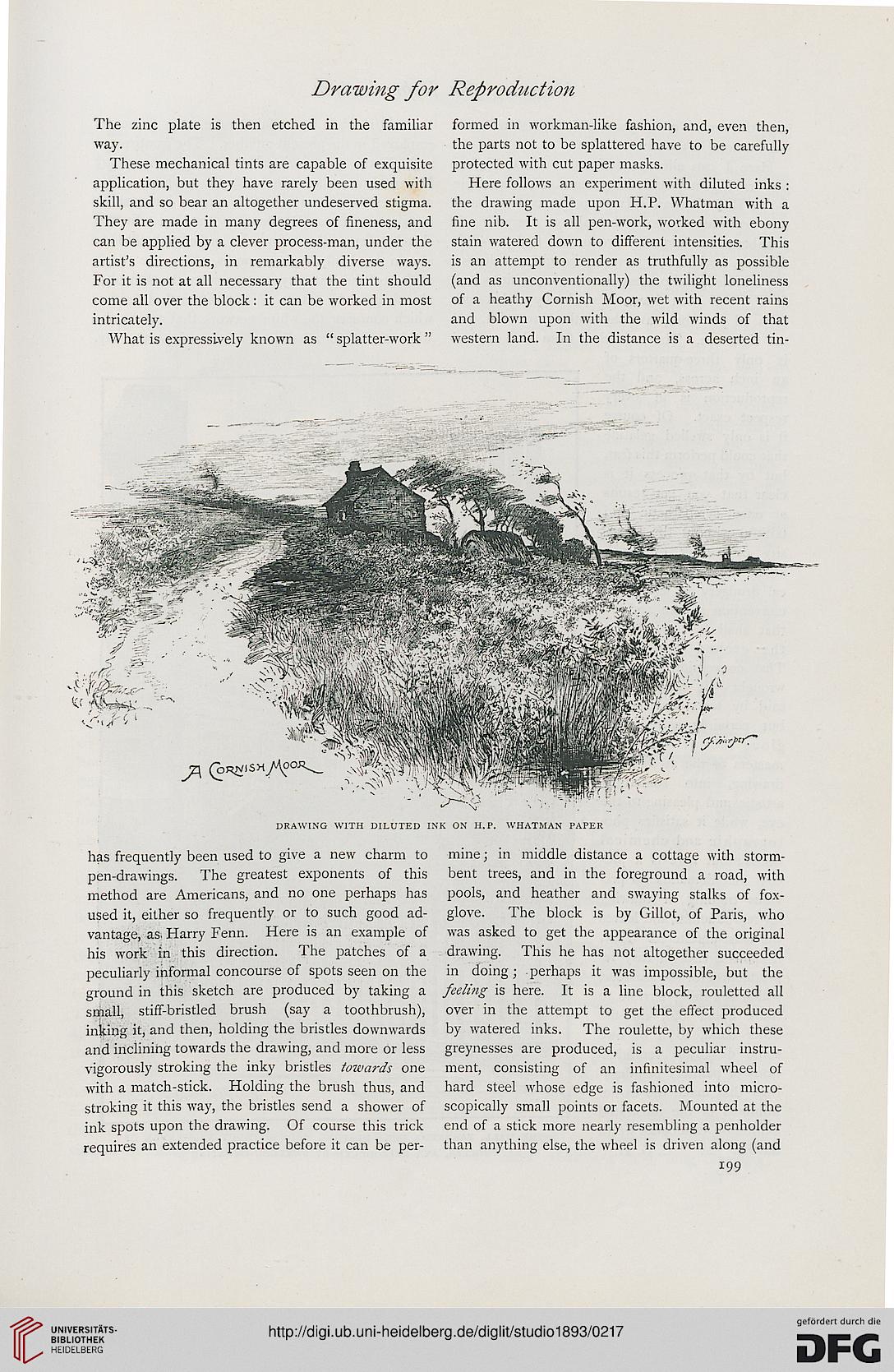 The zinc plate is then etched in the familiar
way.

These mechanical tints are capable of exquisite
application, but they have rarely been used with
skill, and so bear an altogether undeserved stigma.
They are made in many degrees of fineness, and
can be applied by a clever process-man, under the
artist's directions, in remarkably diverse ways.
For it is not at all necessary that the tint should
come all over the block: it can be worked in most
intricately.

What is expressively known as " splatter-work "

formed in workman-like fashion, and, even then,
the parts not to be splattered have to be carefully
protected with cut paper masks.

Here follows an experiment with diluted inks :
the drawing made upon H.P. Whatman with a
fine nib. It is all pen-work, worked with ebony
stain watered down to different intensities. This
is an attempt to render as truthfully as possible
(and as unconventionally) the twilight loneliness
of a heathy Cornish Moor, wet with recent rains
and blown upon with the wild winds of that
western land. In the distance is a deserted tin-

has frequently been used to give a new charm to mine j in middle distance a cottage with storm-
pen-drawings. The greatest exponents of this bent trees, and in the foreground a road, with
method are Americans, and no one perhaps has pools, and heather and swaying stalks of fox-
used it, either so frequently or to such good ad- glove. The block is by Gillot, of Paris, who
vantage, as. Harry Fenn. Here is an example of was asked to get the appearance of the original
his work in this direction. The patches of a drawing. This he has not altogether succeeded
peculiarly informal concourse of spots seen on the in doing; perhaps it was impossible, but the
ground in this sketch are produced by taking a feeling is here. It is a line block, rouletted all
small, stiff-bristled brush (say a toothbrush), over in the attempt to get the effect produced
inking it, and then, holding the bristles downwards by watered inks. The roulette, by which these
and inclining towards the drawing, and more or less greynesses are produced, is a peculiar instru-
vigorously stroking the inky bristles towards one ment, consisting of an infinitesimal wheel of
with a match-stick. Holding the brush thus, and hard steel whose edge is fashioned into micro-
stroking it this way, the bristles send a shower of scopically small points or facets. Mounted at the
ink spots upon the drawing. Of course this trick end of a stick more nearly resembling a penholder
requires an extended practice before it can be per- than anything else, the wheel is driven along (and