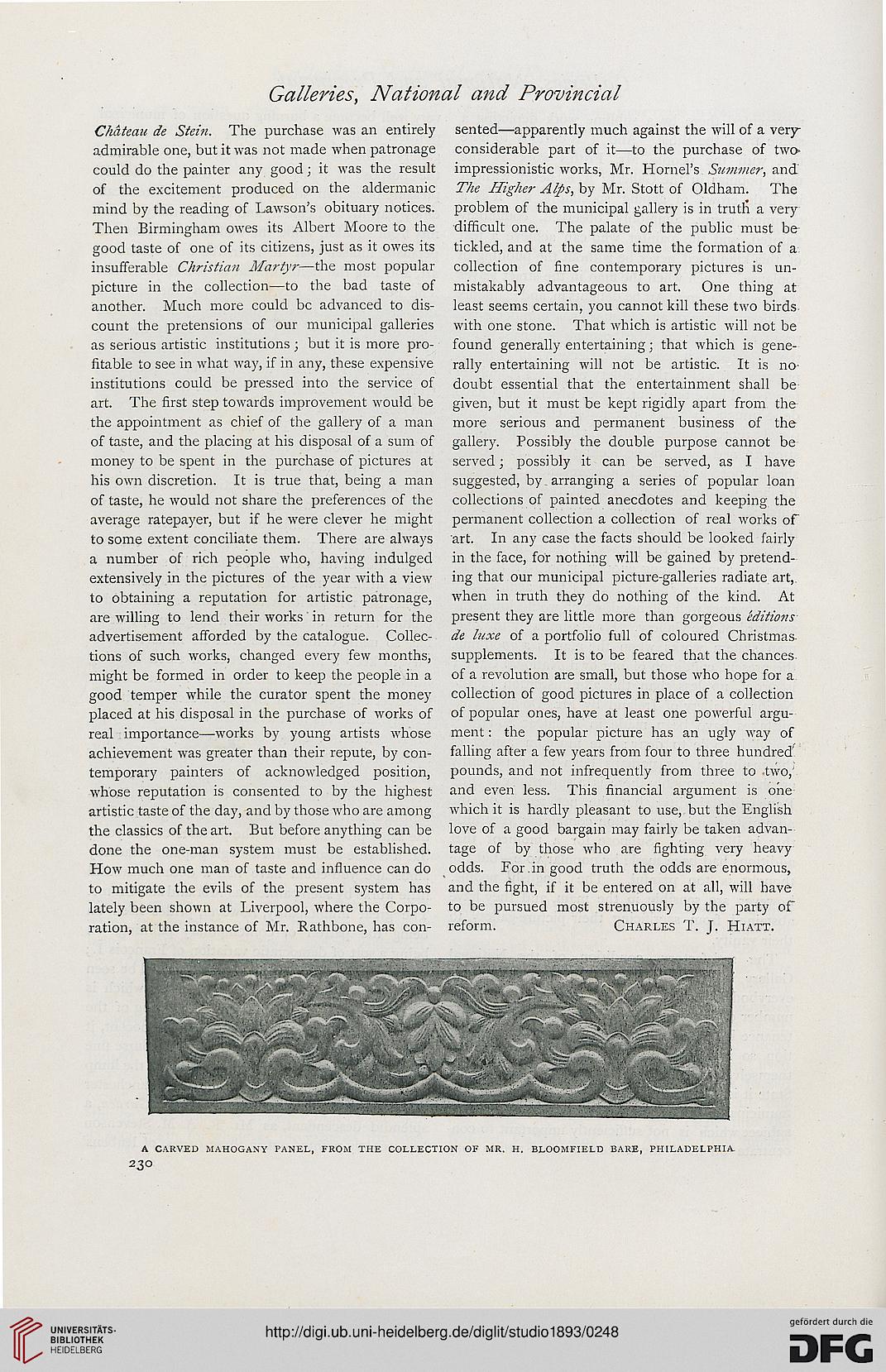 Chateau de Stein. The purchase was an entirely sented—apparently much against the will of a very-
admirable one, but it was not made when patronage considerable part of it—to the purchase of two-
could do the painter any good; it was the result impressionistic works, Mr. Hornel's Summer, and
of the excitement produced on the aldermanic The Higher Alps, by Mr. Stott of Oldham. The
mind by the reading of Lawson's obituary notices, problem of the municipal gallery is in truth' a very
Then Birmingham owes its Albert Moore to the difficult one. The palate of the public must be
good taste of one of its citizens, just as it owes its tickled, and at the same time the formation of a
insufferable Christian Martyr—the most popular collection of fine contemporary pictures is un-
picture in the collection—to the bad taste of mistakably advantageous to art. One thing at
another. Much more could be advanced to dis- least seems certain, you cannot kill these two birds
count the pretensions of our municipal galleries with one stone. That which is artistic will not be
as serious artistic institutions ; but it is more pro- found generally entertaining; that which is gene-
fitable to see in what way, if in any, these expensive rally entertaining will not be artistic. It is no-
institutions could be pressed into the service of doubt essential that the entertainment shall be
art. The first step towards improvement would be given, but it must be kept rigidly apart from the
the appointment as chief of the gallery of a man more serious and permanent business of the
of taste, and the placing at his disposal of a sum of gallery. Possibly the double purpose cannot be
money to be spent in the purchase of pictures at served; possibly it can be served, as I have
his own discretion. It is true that, being a man suggested, by arranging a series of popular loan
of taste, he would not share the preferences of the collections of painted anecdotes and keeping the
average ratepayer, but if he were clever he might permanent collection a collection of real works of
to some extent conciliate them. There are always art. In any case the facts should be looked fairly
a number of rich people who, having indulged in the face, for nothing will be gained by pretend-
extensively in the pictures of the year with a view ing that our municipal picture-galleries radiate art,
to obtaining a reputation for artistic patronage, when in truth they do nothing of the kind. At
are willing to lend their works in return for the present they are little more than gorgeous editions
advertisement afforded by the catalogue. Collec- de luxe of a portfolio full of coloured Christmas
tions of such works, changed every few months, supplements. It is to be feared that the chances
might be formed in order to keep the people in a of a revolution are small, but those who hope for a
good temper while the curator spent the money collection of good pictures in place of a collection
placed at his disposal in the purchase of works of of popular ones, have at least one powerful argu-
real importance—works by young artists whose ment: the popular picture has an ugly way of
achievement was greater than their repute, by con- falling after a few years from four to three hundred
temporary painters of acknowledged position, pounds, and not infrequently from three to two,'
whose reputation is consented to by the highest and even less. This financial argument is one
artistic taste of the day, and by those who are among which it is hardly pleasant to use, but the English
the classics of the art. But before anything can be love of a good bargain may fairly be taken advan-
done the one-man system must be established, tage of by those who are fighting very heavy
How much one man of taste and influence can do odds. For.in good truth the odds are enormous,
to mitigate the evils of the present system has and the fight, if it be entered on at all, will have
lately been shown at Liverpool, where the Corpo- to be pursued most strenuously by the party of
ration, at the instance of Mr. Rathbone, has con- reform. Charles T. J. Hiatt.