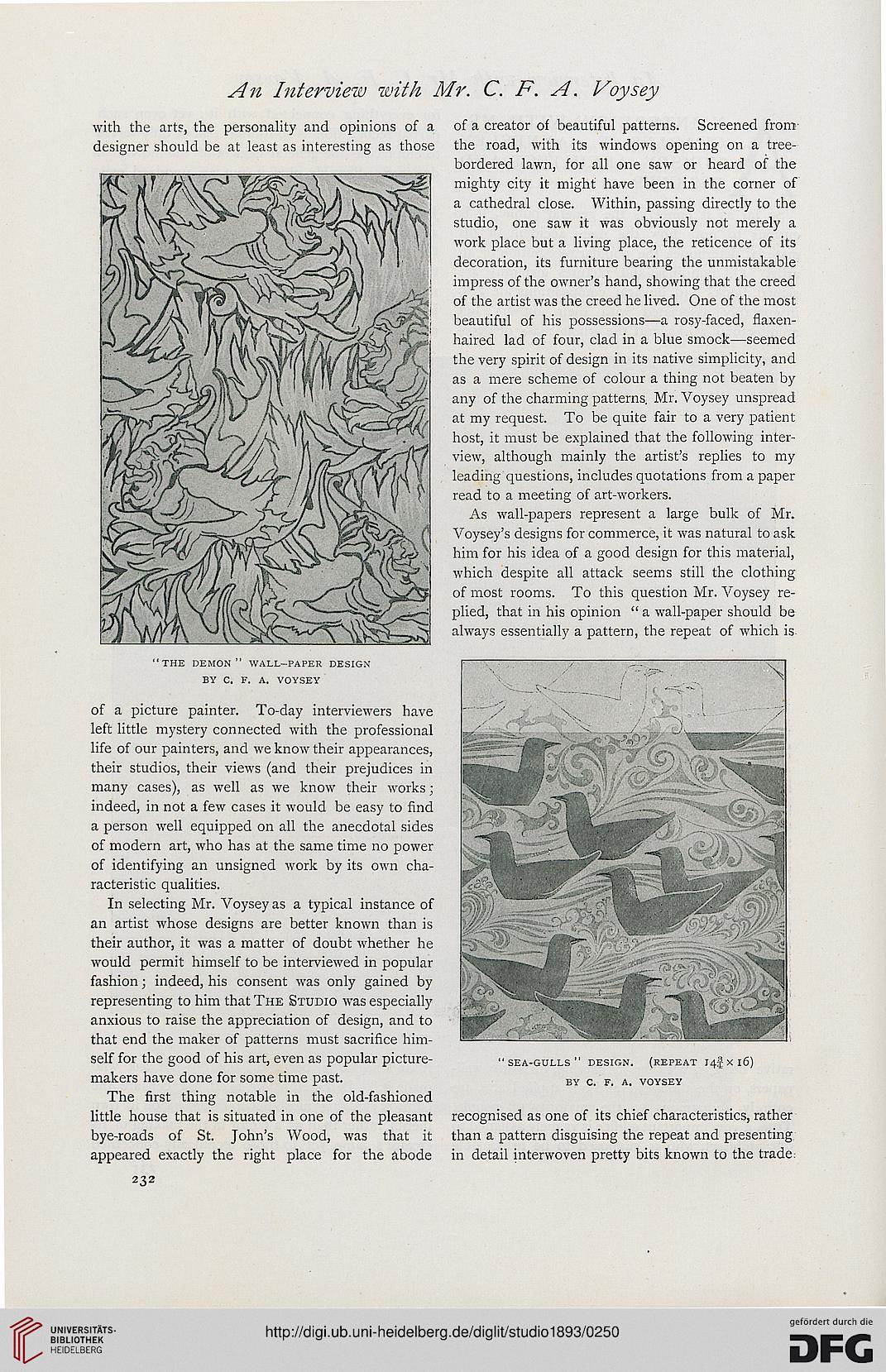 Information about OCR text
An Interview with Mr. C. F. A. Voysey

with the art?, the personality and opinions of a
designer should be at least as interesting as those

"THE DEMON" WALL—PAPER DESIGN
BY C. F. A. VOYSEY

of a picture painter. To-day interviewers have
left little mystery connected with the professional
life of our painters, and we know their appearances,
their studios, their views (and their prejudices in
many cases), as well as we know their works;
indeed, in not a few cases it would be easy to find
a person well equipped on all the anecdotal sides
of modern art, who has at the same time no power
of identifying an unsigned work by its own cha-
racteristic qualities.

In selecting Mr. Voysey as a typical instance of
an artist whose designs are better known than is
their author, it was a matter of doubt whether he
would permit himself to be interviewed in popular
fashion; indeed, his consent was only gained by
representing to him that The Studio was especially
anxious to raise the appreciation of design, and to
that end the maker of patterns must sacrifice him-
self for the good of his art, even as popular picture-
makers have done for some time past.

The first thing notable in the old-fashioned
little house that is situated in one of the pleasant
bye-roads of St. John's Wood, was that it
appeared exactly the right place for the abode

of a creator of beautiful patterns. Screened from
the road, with its windows opening on a tree-
bordered lawn, for all one saw or heard of the
mighty city it might have been in the corner of
a cathedral close. Within, passing directly to the
studio, one saw it was obviously not merely a
work place but a living place, the reticence of its
decoration, its furniture bearing the unmistakable
impress of the owner's hand, showing that the creed
of the artist was the creed he lived. One of the most
beautiful of his possessions—a rosy-faced, flaxen-
haired lad of four, clad in a blue smock—seemed
the very spirit of design in its native simplicity, and
as a mere scheme of colour a thing not beaten by
any of the charming patterns. Mr. Voysey unspread
at my request. To be quite fair to a very patient
host, it must be explained that the following inter-
view, although mainly the artist's replies to my
leading questions, includes quotations from a paper
read to a meeting of art-workers.

As wall-papers represent a large bulk of Mr.
Voysey's designs for commerce, it was natural to ask
him for his idea of a good design for this material,
which despite all attack seems still the clothing
of most rooms. To this question Mr. Voysey re-
plied, that in his opinion " a wall-paper should be
always essentially a pattern, the repeat of which is

recognised as one of its chief characteristics, rather
than a pattern disguising the repeat and presenting
in detail interwoven pretty bits known to the trade: