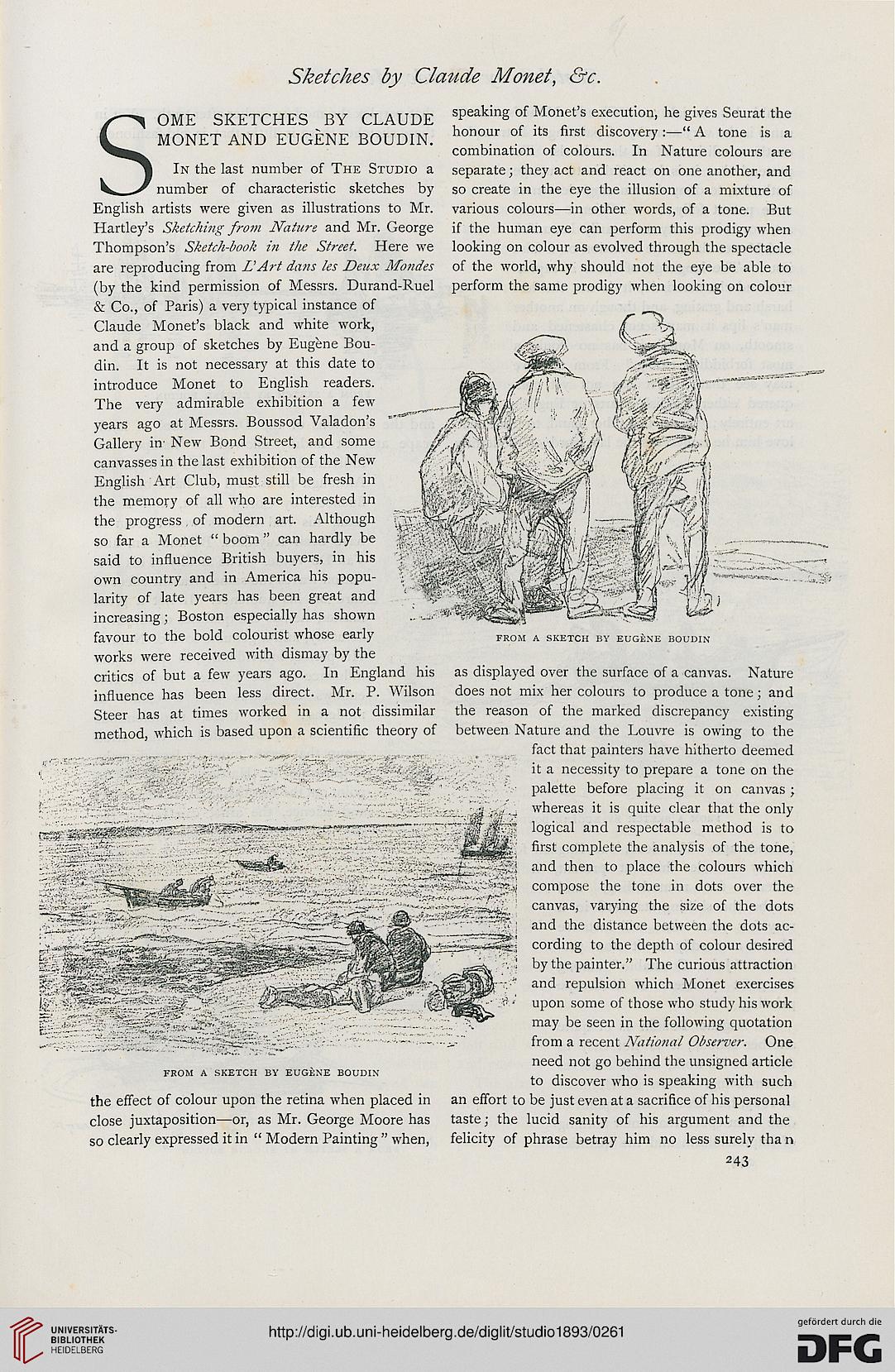 SOME SKETCHES BY CLAUDE sPea^ng °f Monet's execution, he gives Seurat the
MONET AND EUGENE BOUDIN. hon°ur °f itS first discovery:-« A tone is a
combination of colours. In Nature colours are
In the last number of The Studio a separate; they act and react on one another, and
number of characteristic sketches by so create in the eye the illusion of a mixture of
English artists were given as illustrations to Mr. various colours—in other words, of a tone. But
Hartley's Sketching from Nature and Mr. George if the human eye can perform this prodigy when
Thompson's Sketch-book in the Street. Here we looking on colour as evolved through the spectacle
are reproducing from L'Art dans les Deux Mondes of the world, why should not the eye be able to
(by the kind permission of Messrs. Durand-Ruel perform the same prodigy when looking on colour
& Co., of Paris) a very typical instance of
Claude Monet's black and white work,
and a group of sketches by Eugene Bou-
din. It is not necessary at this date to
introduce Monet to English readers.
The very admirable exhibition a few
years ago at Messrs. Boussod Valadon's
Gallery in- New Bond Street, and some
canvasses in the last exhibition of the New
English Art Club, must still be fresh in
the memory of all who are interested in
the progress , of modern art. Although
so far a Monet " boom " can hardly be
said to influence British buyers, in his
own country and in America his popu-
larity of late years has been great and
increasing; Boston especially has shown
favour to the bold colourist whose early

FROM A SKETCH BY EUGENE BOUDIN'

works were received with dismay by the

critics of but a few years ago. In England his as displayed over the surface of a canvas. Nature
influence has been less direct. Mr. P. Wilson does not mix her colours to produce a tone; and
Steer has at times worked in a not dissimilar the reason of the marked discrepancy existing
method, which is based upon a scientific theory of between Nature and the Louvre is owing to the

it a necessity to prepare a tone on the
palette before placing it on canvas ;
whereas it is quite clear that the only
logical and respectable method is to
first complete the analysis of the tone,
and then to place the colours which
compose the tone in dots over the
canvas, varying the size of the dots
and the distance between the dots ac-
cording to the depth of colour desired
by the painter." The curious attraction
and repulsion which Monet exercises
upon some of those who study his work
may be seen in the following quotation
:-Kg 2r, _; : : - ... . from, a recent National Observer. One

need not go behind the unsigned article
to discover who is speaking with such
the effect of colour upon the retina when placed in an effort to be just even at a sacrifice of his personal
close juxtaposition—or, as Mr. George Moore has taste; the lucid sanity of his argument and the
so clearly expressed it in " Modern Painting " when, felicity of phrase betray him no less surely tha n

FROM A SKETCH BY EUGENE BOUDIN