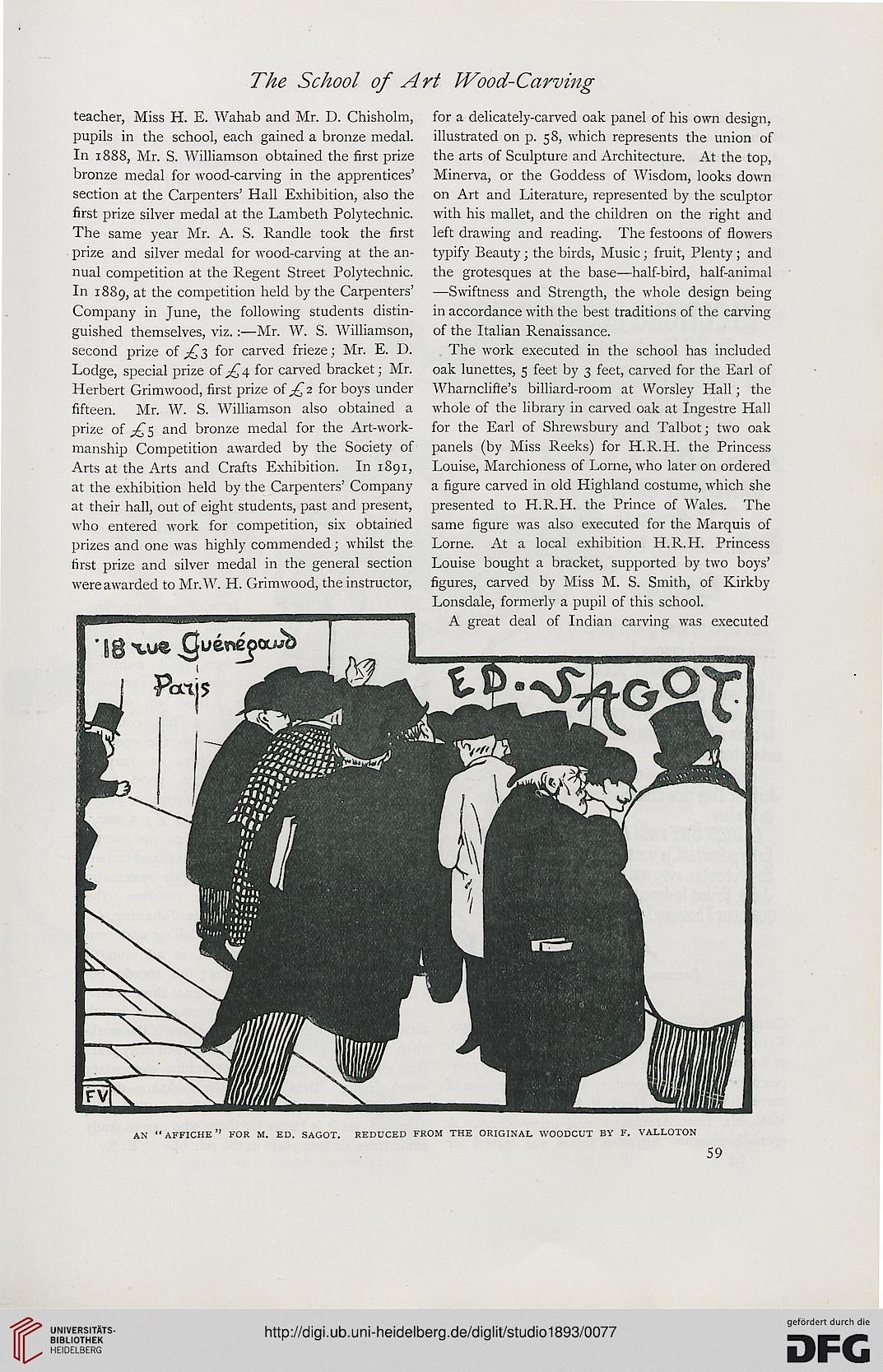 Information about OCR text
The School of Art Wood-Carving

teacher, Miss H. E. Wahab and Mr. D. Chisholm, for a delicately-carved oak panel of his own design,

pupils in the school, each gained a bronze medal, illustrated on p. 58, which represents the union of

In 1888, Mr. S. Williamson obtained the first prize the arts of Sculpture and Architecture. At the top,

bronze medal for wood-carving in the apprentices' Minerva, or the Goddess of Wisdom, looks down

section at the Carpenters' Hall Exhibition, also the on Art and Literature, represented by the sculptor

first prize silver medal at the Lambeth Polytechnic, with his mallet, and the children on the right and

The same year Mr. A. S. Randle took the first left drawing and reading. The festoons of flowers

prize and silver medal for wood-carving at the an- typify Beauty; the birds, Music; fruit, Plenty ; and

nual competition at the Regent Street Polytechnic, the grotesques at the base—half-bird, half-animal

In 1889, at the competition held by the Carpenters' —Swiftness and Strength, the whole design being

Company in June, the following students distin- in accordance with the best traditions of the carving

second prize of ^3 for carved frieze; Mr. E. D. The work executed in the school has included

Lodge, special prize of jQ\ for carved bracket; Mr. oak lunettes, 5 feet by 3 feet, carved for the Earl of

Herbert Grimwood, first prize of £2 for boys under Wharnclifie's billiard-room at Worsley Hall; the

prize of and bronze medal for the Art-work- for the Earl of Shrewsbury and Talbot; two oak

manship Competition awarded by the Society of panels (by Miss Reeks) for H.R.H. the Princess

Arts at the Arts and Crafts Exhibition. In 1891, Louise, Marchioness of Lome, who later on ordered

at the exhibition held by the Carpenters' Company a figure carved in old Highland costume, which she

at their hall, out of eight students, past and present, presented to H.R.H. the Prince of Wales. The

who entered work for competition, six obtained same figure was also executed for the Marquis of

prizes and one was highly commended; whilst the Lome. At a local exhibition H.R.H. Princess

Lonsdale, formerly a pupil of this school.

A great deal of Indian carving was executed

AN "AFFICHE" FOR M. ED. SAGOT. REDUCED FROM THE ORIGINAL WOODCUT BY F. VALLOTON