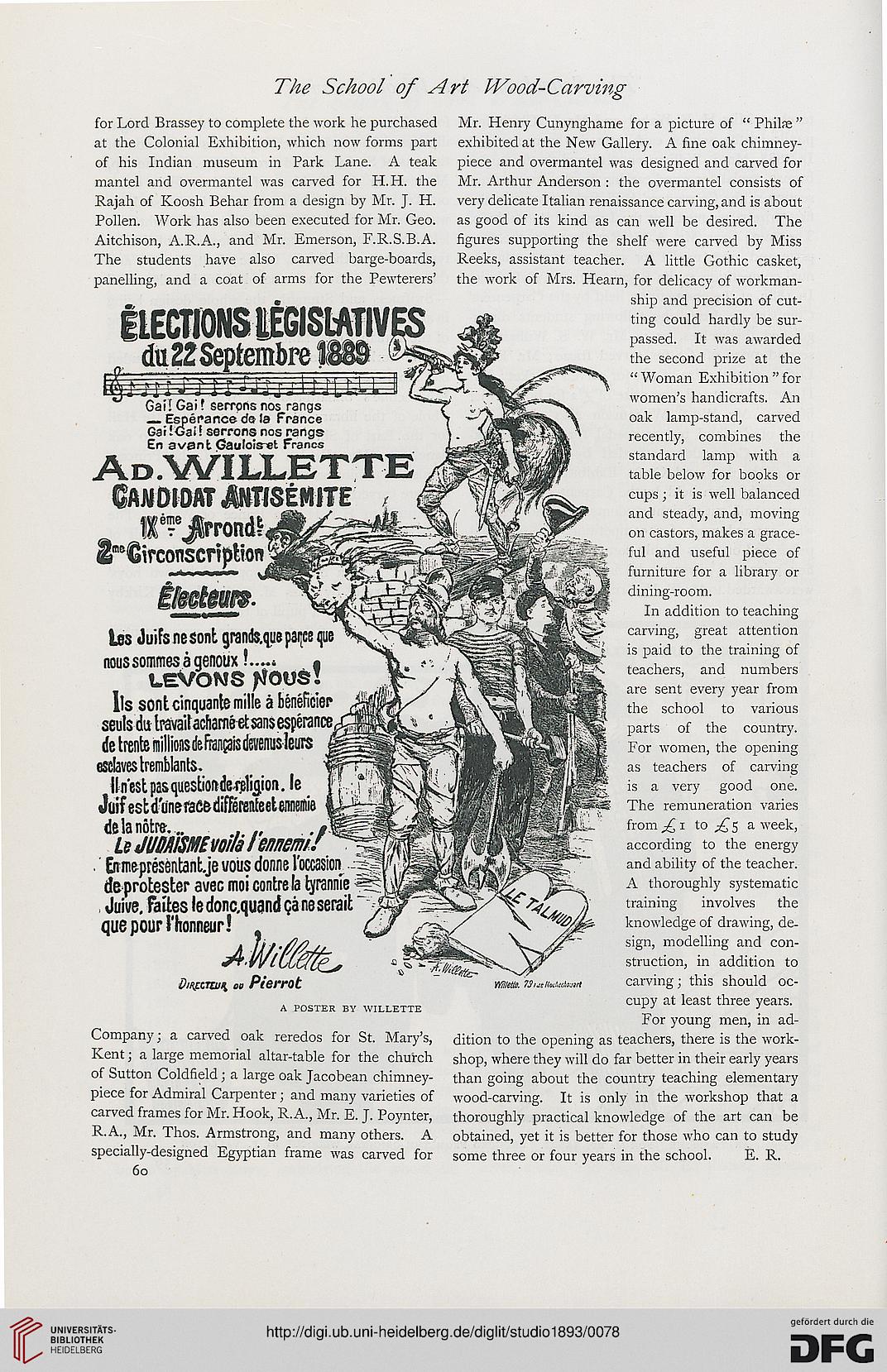 Information about OCR text
The School of Art Wood-Carving

for Lord Brassey to complete the work he purchased
at the Colonial Exhibition, which now forms part
of his Indian museum in Park Lane. A teak
mantel and overmantel was carved for H.H. the
Rajah of Koosh Behar from a design by Mr. J. H.
Pollen. Work has also been executed for Mr. Geo.
Aitchison, A.R.A., and Mr. Emerson, F.R.S.B.A.
The students have also carved barge-boards,
panelling, and a coat of arms for the Pewterers'

Mr. Henry Cunynghame for a picture of " Philse "
exhibited at the New Gallery. A fine oak chimney-
piece and overmantel was designed and carved for
Mr. Arthur Anderson : the overmantel consists of
very delicate Italian renaissance carving, and is about
as good of its kind as can well be desired. The
figures supporting the shelf were carved by Miss
Reeks, assistant teacher. A little Gothic casket,
the work of Mrs. Hearn, for delicacy of workman-
ship and precision of cut-
ting could hardly be sur-
passed. It was awarded
the second prize at the
" Woman Exhibition " for
women's handicrafts. An
oak lamp-stand, carved
recently, combines the
standard lamp with a
table below for books or
cups ; it is well balanced
and steady, and, moving
on castors, makes a grace-
ful and useful piece of
furniture for a library or
dining-room.

In addition to teaching
carving, great attention
is paid to the training of
teachers, and numbers
are sent every year from
the school to various
parts of the country.
For women, the opening
as teachers of carving
is a very good one.
The remuneration varies
from £ i to ^5 a week,
according to the energy
and ability of the teacher.
A thoroughly systematic
training involves the
knowledge of drawing, de-
sign, modelling and con-
struction, in addition to
carving; this should oc-
cupy at least three years.
For young men, in ad-
teachers, there is the work-
far better in their early years
ountry teaching elementary
lly in the workshop that a
owledge of the art can be
■ for those who can to study
3 in the school. E. R.

A POSTER BY WILLETTE

Company; a carved oak reredos for St. Mary's, dition to the opening as

Kent; a large memorial altar-table for the church sh0p, where they will do

of Sutton Coldfield; a large oak Jacobean chimney- than going about the c

piece for Admiral Carpenter; and many varieties of wood-carving. It is or

R.A., Mr. Thos. Armstrong, and many others. A obtained, yet it is better

specially-designed Egyptian frame was carved for some three or four year;