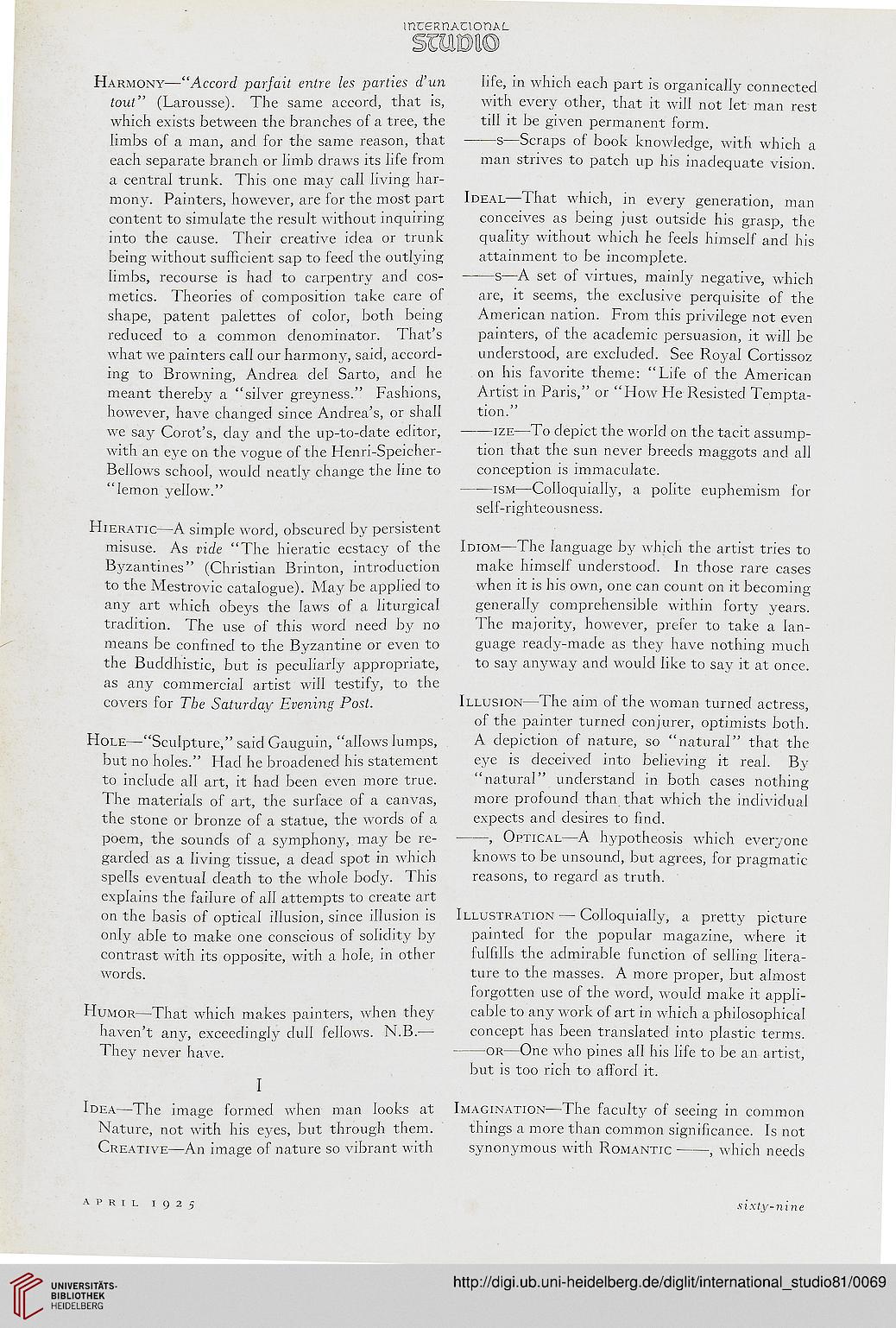 Harmony—"Accord parjait entre les parties d'un
tout" (Larousse). The same accord, that is,
which exists between the branches of a tree, the
limbs of a man, and for the same reason, that
each separate branch or limb draws its life from
a central trunk. This one may call living har-
monjr. Painters, however, are for the most part
content to simulate the result without inquiring
into the cause. Their creative idea or trunk
being without sufficient sap to feed the outlying
limbs, recourse is had to carpentry and cos-
metics. Theories of composition take care of
shape, patent palettes of color, both being
reduced to a common denominator. That's
what we painters call our harmony, said, accord-
ing to Browning, Andrea del Sarto, and he
meant thereby a "silver greyness." Fashions,
however, have changed since Andrea's, or shall
we say Corot's, day and the up-to-date editor,
with an eye on the vogue of the Henri-Speicher-
Bellows school, would neatly change the line to
"lemon yellow."

Hieratic—A simple word, obscured by persistent
misuse. As vide "The hieratic ecstacy of the
Byzantines" (Christian Brinton, introduction
to the Mestrovic catalogue). May be applied to
any art which obeys the laws of a liturgical
tradition. The use of this word need by no
means be confined to the Byzantine or even to
the Buddhistic, but is peculiarly appropriate,
as any commercial artist will testify, to the
covers for The Saturday Evening Post.

Hole—"Sculpture," said Gauguin, "allows lumps,
but no holes." Had he broadened his statement
to include all art, it had been even more true.
The materials of art, the surface of a canvas,
the stone or bronze of a statue, the words of a
poem, the sounds of a symphony, may be re-
garded as a living tissue, a dead spot in which
spells eventual death to the whole body. This
explains the failure of all attempts to create art
on the basis of optical illusion, since illusion is
only able to make one conscious of solidity by
contrast with its opposite, with a hole, in other
words.

Humor—That which makes painters, when they
haven't any, exceedingly dull fellows. N.B.—
They never have.

Idea—The image formed when man looks at
Nature, not with his eyes, but through them.
Creative—An image of nature so vibrant with

life, in which each part is organically connected
with every other, that it will not let man rest
till it be given permanent form.

--s—Scraps of book knowledge, with which a

man strives to patch up his inadequate vision.

Ideal—That which, in every generation, man
conceives as being just outside his grasp, the
quality without which he feels himself and his
attainment to be incomplete.

are, it seems, the exclusive perquisite of the
American nation. From this privilege not even
painters, of the academic persuasion, it will be
understood, are excluded. See Royal Cortissoz
on his favorite theme: "Life of the American
Artist in Paris," or "How He Resisted Tempta-
tion."

-ize—To depict the world on the tacit assump-
tion that the sun never breeds maggots and all
conception is immaculate.

--ism—Colloquially, a polite euphemism for

Idiom—The language by which the artist tries to
make himself understood. In those rare cases
when it is his own, one can count on it becoming
generally comprehensible within forty years.
The majority, however, prefer to take a lan-
guage ready-made as they have nothing much
to say anyway and would like to say it at once.

Illusion—The aim of the woman turned actress,
of the painter turned conjurer, optimists both.
A depiction of nature, so "natural" that the
eye is deceived into believing it real. By
"natural" understand in both cases nothing
more profound than that which the individual
expects and desires to find.

knows to be unsound, but agrees, for pragmatic
reasons, to regard as truth.

Illustration — Colloquially, a pretty picture
painted for the popular magazine, where it
fulfills the admirable function of selling litera-
ture to the masses. A more proper, but almost
forgotten use of the word, would make it appli-
cable to any work of art in which a philosophical
concept has been translated into plastic terms.

----or—One who pines all his life to be an artist,

but is too rich to afford it.

Imagination—The faculty of seeing in common
things a more than common significance. Is not
synonymous with Romantic--, which needs