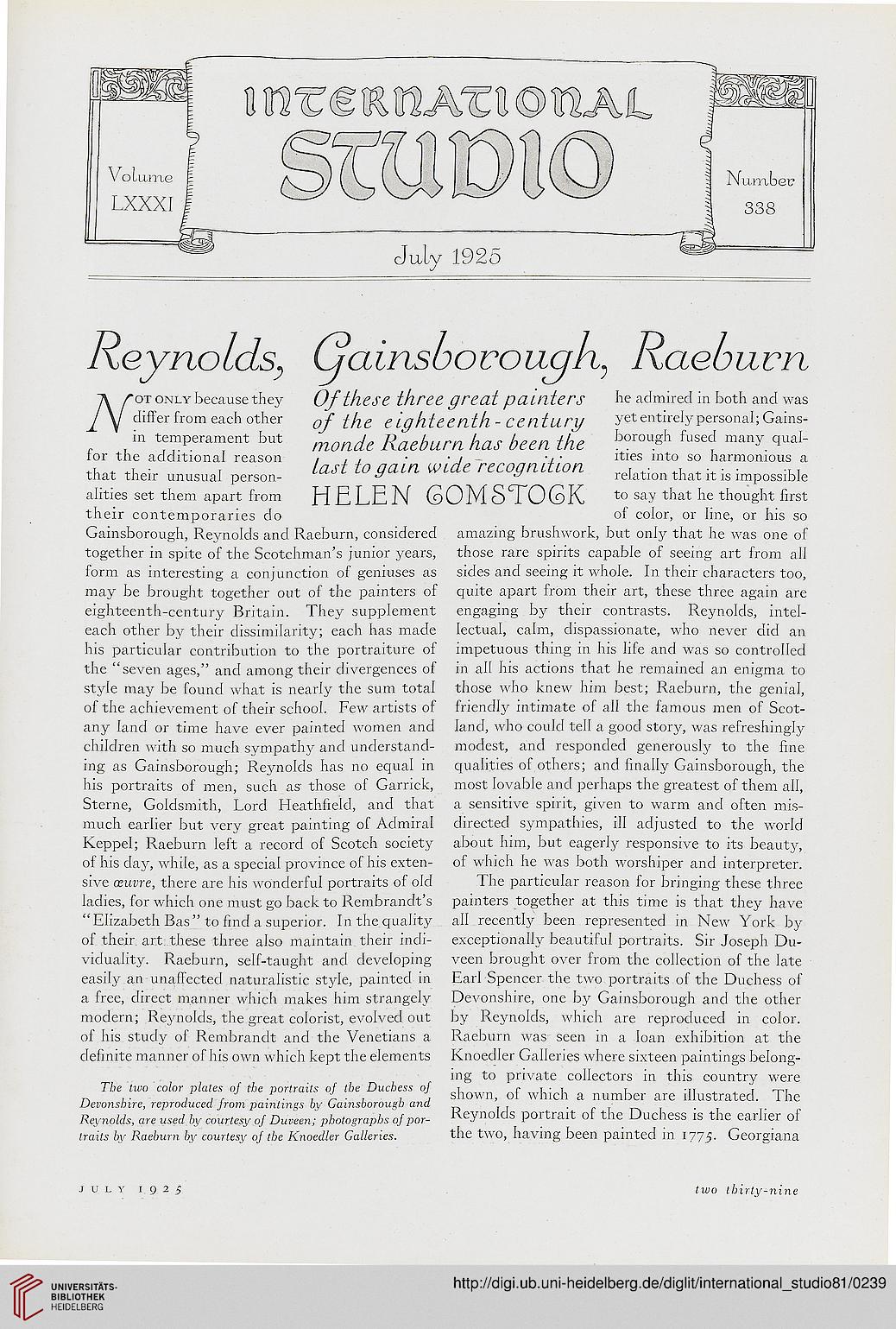 J\J differ from each other of the eighteenth-century yet entirely personal ;Gains-

alities set them apart from \\ £ LE N SOM STOSK t0 sa>' that Ile thought first
their contemporaries do of color, or line, or his so
Gainsborough, Reynolds and Raeburn, considered amazing brushwork, but only that he was one of
together in spite of the Scotchman's junior years, those rare spirits capable of seeing art from all
form as interesting a conjunction of geniuses as sides and seeing it whole. In their characters too,
may be brought together out of the painters of quite apart from their art, these three again arc
eighteenth-century Britain. They supplement engaging by their contrasts. Reynolds, intel-
each other by their dissimilarity; each has made Iectual, calm, dispassionate, who never did an
his particular contribution to the portraiture of impetuous thing in his life and was so controlled
the "seven ages," and among their divergences of in all his actions that he remained an enigma to
style may be found what is nearly the sum total those who knew him best; Raeburn, the genial,
of the achievement of their school. Few artists of friendly intimate of all the famous men of Scot-
any land or time have ever painted women and land, who could tell a good story, was refreshingly
children with so much sympathy and understand- modest, and responded generously to the fine
ing as Gainsborough; Reynolds has no equal in qualities of others; and finally Gainsborough, the
his portraits of men, such as those of Garrick, most lovable and perhaps the greatest of them all,
Sterne, Goldsmith, Lord Heathfield, and that a sensitive spirit, given to warm and often mis-
much earlier but very great painting of Admiral directed sympathies, ill adjusted to the world
Keppel; Raeburn left a record of Scotch society about him, but eagerly responsive to its beauty,
of his day, while, as a special province of his exten- of which he was both worshiper and interpreter,
sive ceiwre, there are his wonderful portraits of old The particular reason for bringing these three
ladies, for which one must go back to Rembrandt's painters together at this time is that they have
"Elizabeth Bas" to find a superior. In the quality all recently been represented in New York by
of their art these three also maintain their indi- exceptionally beautiful portraits. Sir Joseph Du-
viduality. Raeburn, self-taught and developing veen brought over from the collection of the late
easily an unaffected naturalistic style, painted in Earl Spencer the two portraits of the Duchess of
a free, direct manner which makes him strangely Devonshire, one by Gainsborough and the other
modern; Reynolds, the great colorist, evolved out by Reynolds, which are reproduced in color,
of his study of Rembrandt and the Venetians a Raeburn was seen in a loan exhibition at the
definite manner of his own which kept the elements Knoedler Galleries where sixteen paintings belong-
ing to private collectors in this country were
Tie -two color plain of the portraits of the Duchess of q{ wh;ch & mlmber Rre iHustrated. The

Reynolds portrait of the Duchess is the earlier of

Devonshire, reproduced from paintings by Gainsborough and
Reynolds, are used by courtesy of Duveen; photographs of por-

traits hy Raeburn by courtesy of the Knoedler Galleries. the two, having been painted in 1775. Georgiana