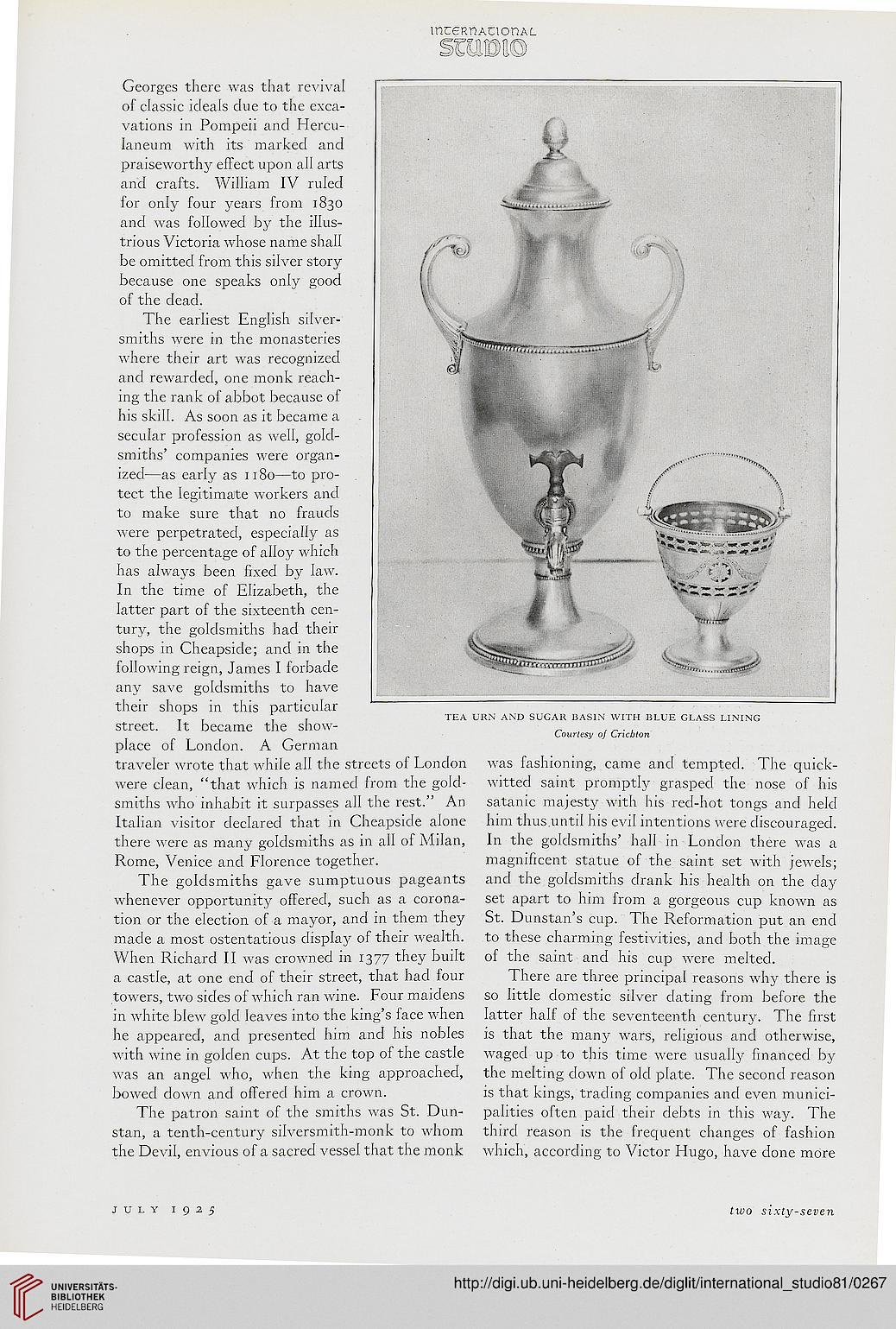 Georges there was that revival
of classic ideals due to the exca-
vations in Pompeii and Hercu-
Ianeum with its marked and
praiseworthy effect upon all arts
and crafts. William IV ruled
for only four years from 1830
and was followed by the illus-
trious Victoria whose name shall
be omitted from this silver story
because one speaks only good
of the dead.

The earliest English silver-
smiths were in the monasteries
where their art was recognized
and rewarded, one monk reach-
ing the rank of abbot because of
his skill. As soon as it became a
secular profession as well, gold-
smiths' companies were organ-
ized—as early as 1180—to pro-
tect the legitimate workers and
to make sure that no frauds
were perpetrated, especially as
to the percentage of ahoy which
has always been fixed by law.
In the time of Elizabeth, the
latter part of the sixteenth cen-
tury, the goldsmiths had their
shops in Cheapside; and in the
following reign, James I forbade
any save goldsmiths to have
their shops in this particular

street. It became the snow- ■

place of London. A German

traveler wrote that while all the streets of London was fashioning, came and tempted. The quick-
were clean, "that which is named from the gold- witted saint promptly grasped the nose of his
smiths who inhabit it surpasses all the rest." An satanic majesty with his red-hot tongs and held
Italian visitor declared that in Cheapside alone him thus until his evil intentions were discouraged,
there were as many goldsmiths as in all of Milan, In the goldsmiths' hall in London there was a
Rome, Venice and Florence together. magnificent statue of the saint set with jewels;

whenever opportunity offered, such as a corona- set apart to him from a gorgeous cup known as

tion or the election of a mayor, and in them they St. Dunstan's cup. The Reformation put an end

made a most ostentatious display of their wealth, to these charming festivities, and both the image

When Richard II was crowned in 1377 they built of the saint and his cup were melted,

a castle, at one end of their street, that had lour There are three principal reasons why there is

towers, two sides of which ran wine. Four maidens so little domestic silver dating from before the

in white blew gold leaves into the king's face when latter half of the seventeenth century. The first

he appeared, and presented him and his nobles is that the many wars, religious and otherwise,

with wine in golden cups. At the top of the castle waged up to this time were usually financed by

was an angel who, when the king approached, the melting down of old plate. The second reason

bowed down and offered him a crown. is that kings, trading companies and even munici-

The patron saint of the smiths was St. Dun- palities often paid their debts in this way. The

stan, a tenth-century silversmith-monk to whom third reason is the frequent changes of fashion

the Devil, envious of a sacred vessel that the monk which, according to Victor Hugo, have done more