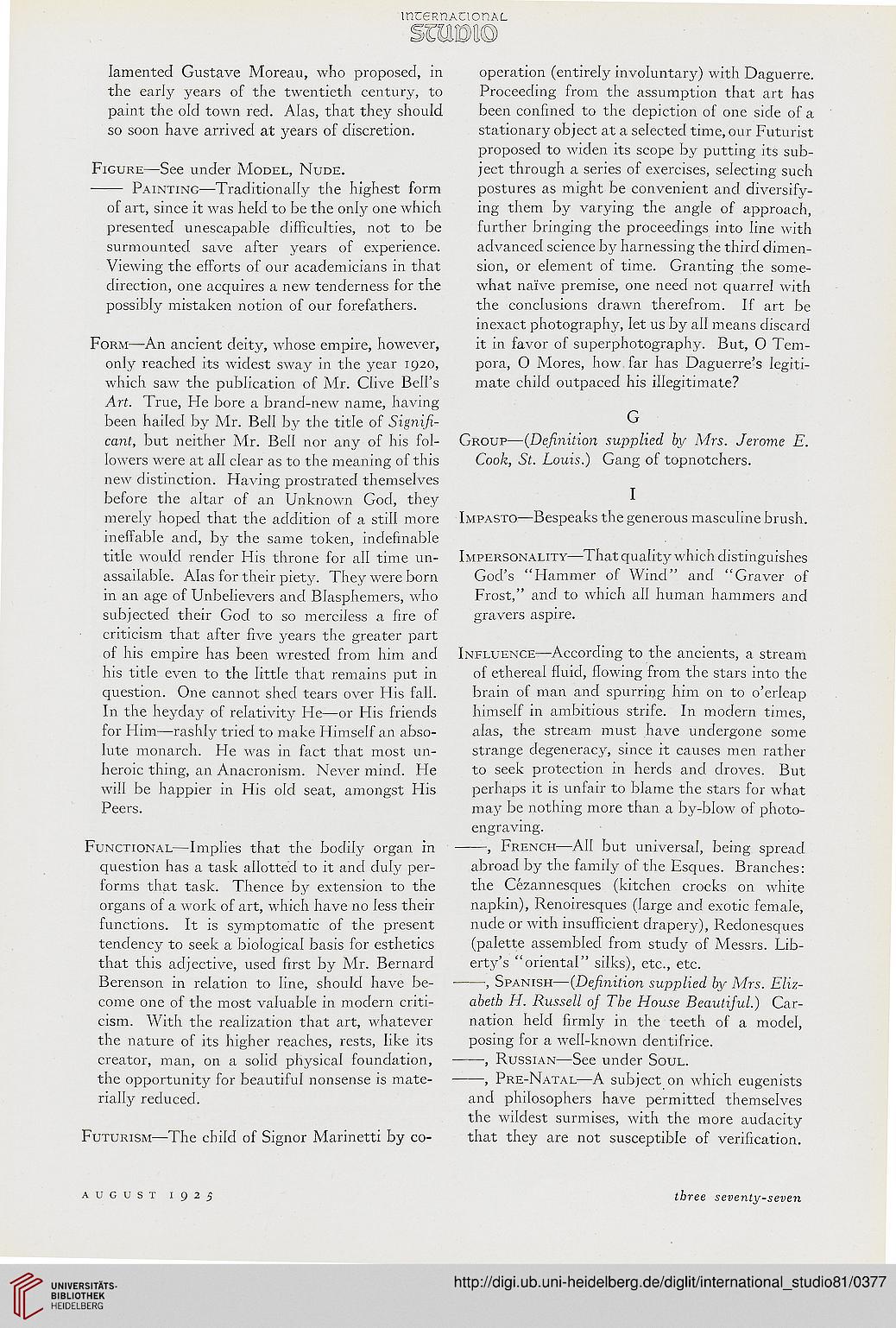 lamented Gustave Moreau, who proposed, in
the early years of the twentieth century, to
paint the old town red. Alas, that they should
so soon have arrived at years of discretion.

of art, since it was held to be the only one which
presented unescapable difficulties, not to be
surmounted save after years of experience.
Viewing the efforts of our academicians in that
direction, one acquires a new tenderness for the
possibly mistaken notion of our forefathers.

Form—An ancient deity, whose empire, however,
only reached its widest sway in the year 1920,
which saw the publication of Mr. Clive Bell's
Art. True, He bore a brand-new name, having
been hailed by Mr. Bell by the title of Signifi-
cant, but neither Mr. Bell nor any of his fol-
lowers were at all clear as to the meaning of this
new distinction. Having prostrated themselves
before the altar of an Unknown God, they
merely hoped that the addition of a still more
ineffable and, by the same token, indefinable
title would render His throne for all time un-
assailable. Alas for their piety. They were born
in an age of Unbelievers and Blasphemers, who
subjected their God to so merciless a fire of
criticism that after five years the greater part
of his empire has been wrested from him and
his title even to the little that remains put in
question. One cannot shed tears over His fall.
In the heyday of relativity He—or His friends
for Him—rashly tried to make Himself an abso-
lute monarch. He was in fact that most un-
heroic thing, an Anacronism. Never mind. He
will be happier in His old seat, amongst His
Peers.

Functional—Implies that the bodily organ in
question has a task allotted to it and duly per-
forms that task. Thence by extension to the
organs of a work of art, which have no less their
functions. It is symptomatic of the present
tendency to seek a biological basis for esthetics
that this adjective, used first by Mr. Bernard
Berenson in relation to line, should have be-
come one of the most valuable in modern criti-
cism. With the realization that art, whatever
the nature of its higher reaches, rests, like its
creator, man, 011 a solid physical foundation,
the opportunity for beautiful nonsense is mate-
rially reduced.

operation (entirely involuntary) with Daguerre.
Proceeding from the assumption that art has
been confined to the depiction of one side of a
stationary object at a selected time, our Futurist
proposed to widen its scope by putting its sub-
ject through a series of exercises, selecting such
postures as might be convenient and diversify-
ing them by varying the angle of approach,
further bringing the proceedings into line with
advanced science by harnessing the third dimen-
sion, or element of time. Granting the some-
what naive premise, one need not quarrel with
the conclusions drawn therefrom. If art be
inexact photography, let us by all means discard
it in favor of superphotography. But, O Tem-
pora, O Mores, how far has Daguerre's legiti-
mate child outpaced his illegitimate?

Impersonality—That quality which distinguishes
God's "Hammer of Wind" and "Graver of
Frost," and to which all human hammers and
gravers aspire.

Influence—According to the ancients, a stream
of ethereal fluid, flowing from the stars into the
brain of man and spurring him on to o'erleap
himself in ambitious strife. In modern times,
alas, the stream must have undergone some
strange degeneracy, since it causes men rather
to seek protection in herds and droves. But
perhaps it is unfair to blame the stars for what
may be nothing more than a by-blow of photo-
engraving.

-, French—All but universal, being spread

--, Spanish—(Definition supplied by Mrs. Eliz-
abeth H. Russell 0/ The House Beautiful.) Car-
nation held firmly in the teeth of a model,
posing for a well-known dentifrice.

-, Pre-Natal—A subject on which eugenists

and philosophers have permitted themselves
the wildest surmises, with the more audacity
that they are not susceptible of verification.