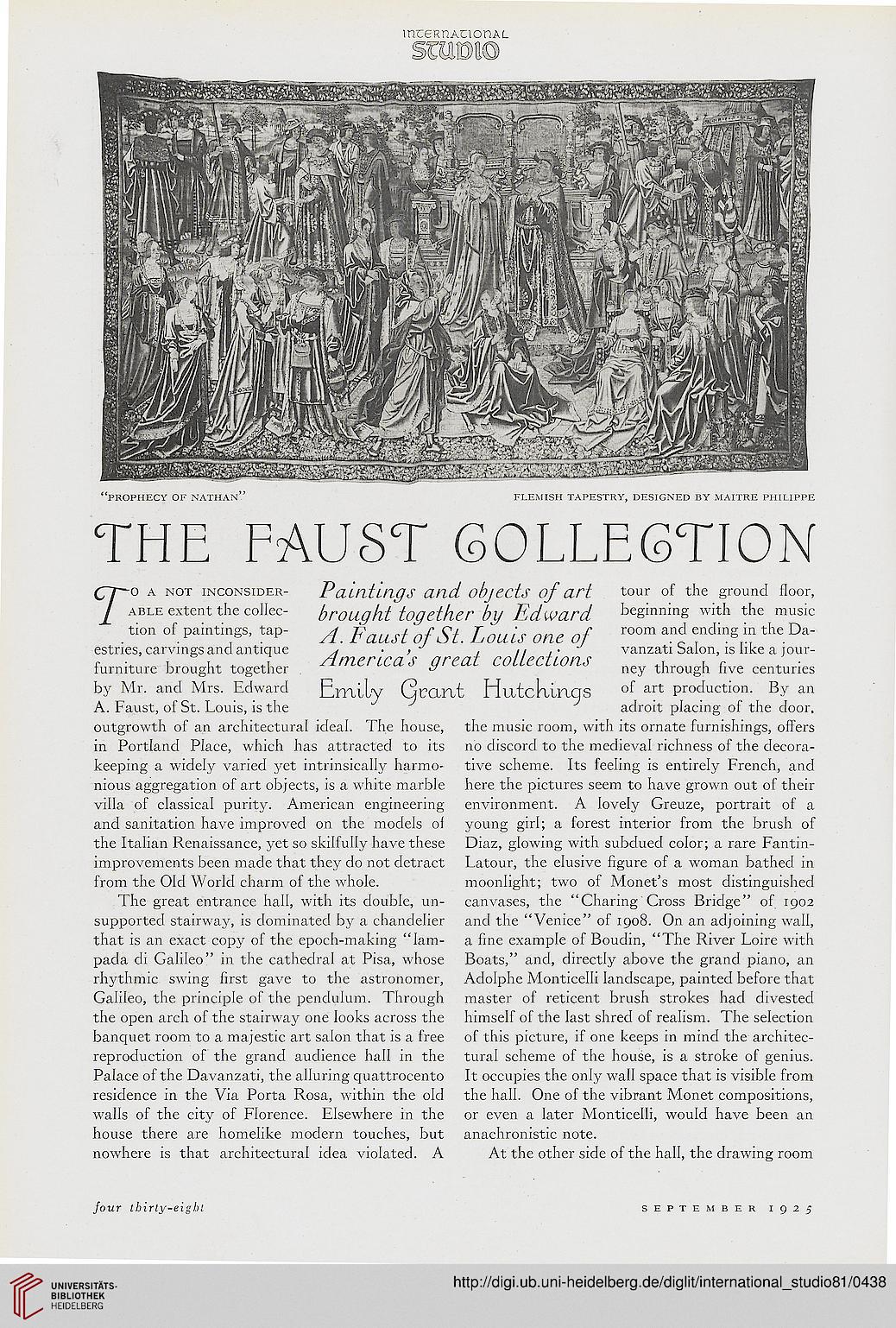 / able extent the collec-
tion of paintings, tap-
estries, carvings and antique
furniture brought together
by Mr. and Mrs. Edward
A. Faust, of St. Louis, is the
outgrowth of an architectural ideal. The house,
in Portland Place, which has attracted to its
keeping a widely varied yet intrinsically harmo-
nious aggregation of art objects, is a white marble
villa of classical purity. American engineering
and sanitation have improved on the models of
the Italian Renaissance, yet so skilfully have these
improvements been made that they do not detract
from the Old World charm of the whole.

The great entrance hall, with its double, un-
supported stairway, is dominated by a chandelier
that is an exact copy of the epoch-making "Iam-
pada di Galileo" in the cathedral at Pisa, whose
rhythmic swing first gave to the astronomer,
Galileo, the principle of the pendulum. Through
the open arch of the stairway one looks across the
banquet room to a majestic art salon that is a free
reproduction of the grand audience hall in the
Palace of the Davanzati, the alluring quattrocento
residence in the Via Porta Rosa, within the old
walls of the city of Florence. Elsewhere in the
house there are homelike modern touches, but
nowhere is that architectural idea violated. A

tour of the ground floor,
beginning with the music
room and ending in the Da-
vanzati Salon, is like a jour-
ney through five centuries
of art production. By an
adroit placing of the door,
the music room, with its ornate furnishings, offers
no discord to the medieval richness of the decora-
tive scheme. Its feeling is entirely French, and
here the pictures seem to have grown out of their
environment. A lovely Greuze, portrait of a
young girl; a forest interior from the brush of
Diaz, glowing with subdued color; a rare Fantin-
Latour, the elusive figure of a woman bathed in
moonlight; two of Monet's most distinguished
canvases, the "Charing Cross Bridge" of 1902
and the "Venice" of 1908. On an adjoining wall,
a fine example of Boudin, "The River Loire with
Boats," and, directly above the grand piano, an
Adolphe Monticelli landscape, painted before that
master of reticent brush strokes had divested
himself of the last shred of realism. The selection
of this picture, if one keeps in mind the architec-
tural scheme of the house, is a stroke of genius.
It occupies the only wall space that is visible from
the hall. One of the vibrant Monet compositions,
or even a later Monticelli, would have been an
anachronistic note.

At the other side of the hall, the drawing room

Paintings and objects of art
brought together by Edward
A. Faust of St. Louis one of
Americas great cottections