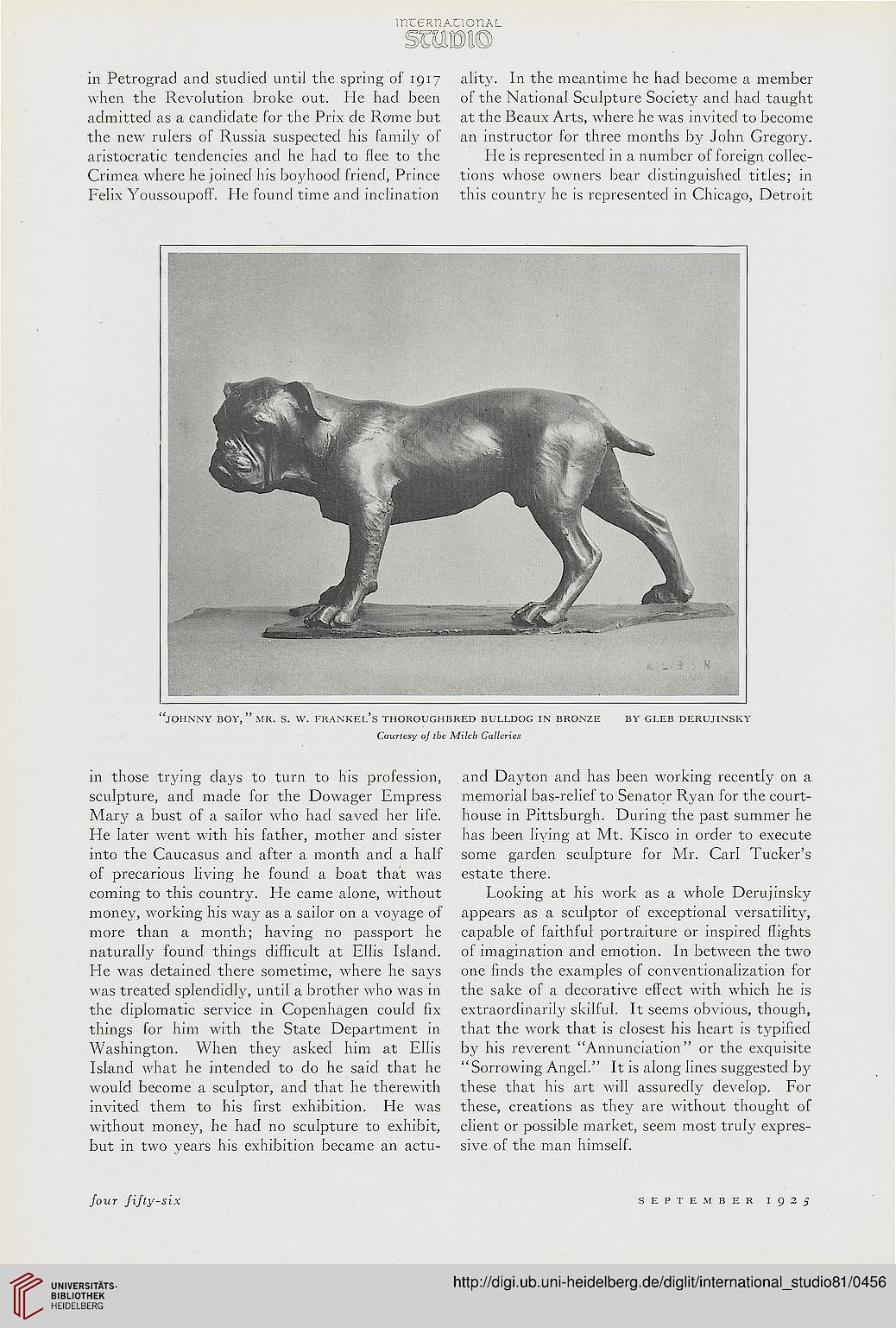 in Petrograd and studied until the spring of 1917
when the Revolution broke out. He had been
admitted as a candidate for the Prix de Rome but
the new rulers of Russia suspected his family of
aristocratic tendencies and he had to flee to the
Crimea where he joined his boyhood friend, Prince
Felix Youssoupoff. He found time and inclination

ality. In the meantime he had become a member
of the National Sculpture Society and had taught
at the Beaux Arts, where he was invited to become
an instructor for three months by John Gregory.

Courtesy of the Milch Galleries

in those trying days to turn to his profession,
sculpture, and made for the Dowager Empress
Mary a bust of a sailor who had saved her life.
He later went with his father, mother and sister
into the Caucasus and after a month and a half
of precarious living he found a boat that was
coming to this country. He came alone, without
money, working his way as a sailor on a voyage of
more than a month; having no passport he
naturally found things difficult at Ellis Island.
He was detained there sometime, where he says
was treated splendidly, until a brother who was in
the diplomatic service in Copenhagen could fix
things for him with the State Department in
Washington. When they asked him at Ellis
Island what he intended to do he said that he
would become a sculptor, and that he therewith
invited them to his first exhibition. He was
without money, he had no sculpture to exhibit,
but in two years his exhibition became an actu-

and Dayton and has been working recently on a
memorial bas-relief to Senator Ryan for the court-
house in Pittsburgh. During the past summer he
has been living at Mt. Kisco in order to execute
some garden sculpture for Mr. Carl Tucker's
estate there.

Looking at his work as a whole Derujinsky
appears as a sculptor of exceptional versatility,
capable of faithful portraiture or inspired flights
of imagination and emotion. In between the two
one finds the examples of conventionalization for
the sake of a decorative effect with which he is
extraordinarily skilful. It seems obvious, though,
that the work that is closest his heart is typified
by his reverent "Annunciation" or the exquisite
"Sorrowing Angel." It is along lines suggested by
these that his art will assuredly develop. For
these, creations as they are without thought of
client or possible market, seem most truly expres-
sive of the man himself.